Parish takes May procession to the streets for Mother’s Day 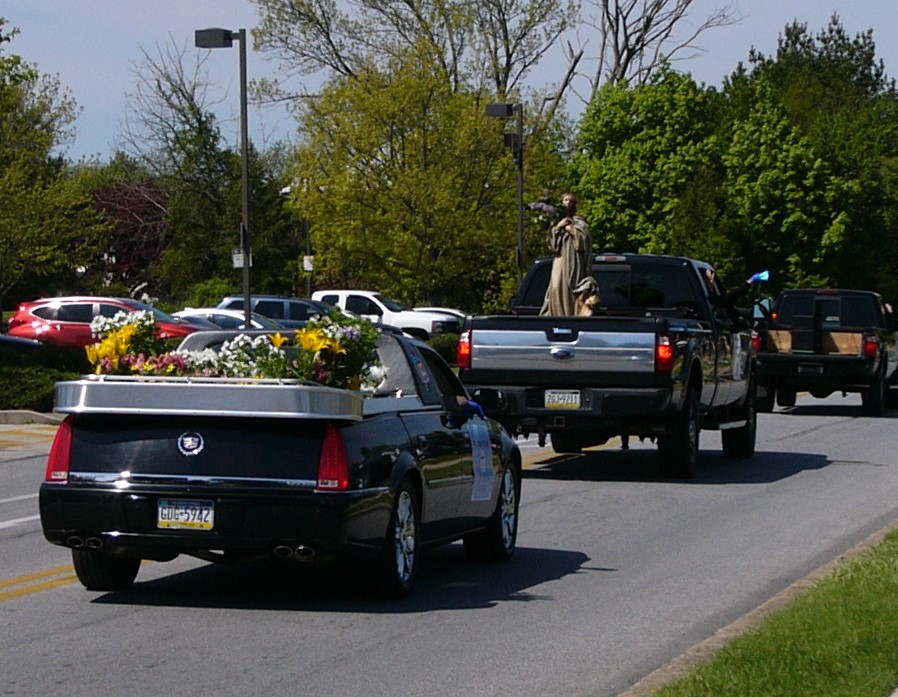 When parishioners couldn’t get to St. John Fisher Church, Boothwyn, for the parish’s annual Mother’s Day festivities, the community rallied together for a “May Procession on Wheels.”

On May 10, Mother’s Day, a statue of the Blessed Mother was driven through the streets of parish neighborhoods, complete with a police escort, speakers playing traditional Marian hymns and a truck bed of fresh flowers.

“I had tears in my eyes when the statue went by,” said longtime parishioner Nora Valentine, who watched the procession from her sidewalk with her two grandsons.

Father McDermott observed families with young children, grandparents and even many people with their pet dogs, social-distanced throughout the parade route. He estimated several hundred observers, all keeping social distance.

Valentine said many people were also observing from inside their homes. She added that it was great to see the devotion during the upheaval of the coronavirus pandemic. 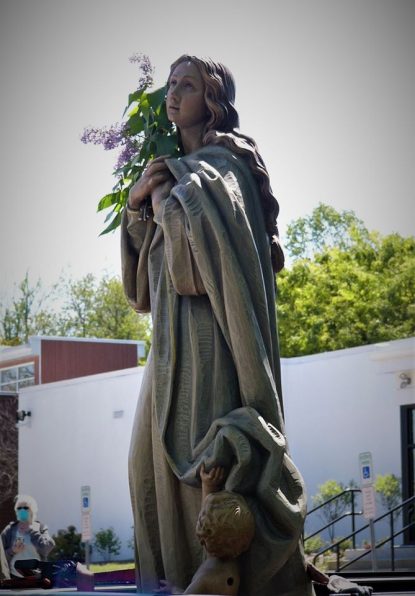 Public Masses throughout the Archdiocese of Philadelphia have been suspended since March 18 in an effort to mitigate the spread of the virus. While St. John Fisher and other churches remain open for private prayer, typical participation in sacramental and parish life has been temporarily altered.

Noticing a longing in many hearts to return to church, parishioner and Grand Knight of the Holy Savior Council Joe DiMarco put the solution simply: “You bring the church to them.”

As DiMarco rode in the procession, he observed people blessing themselves, tossing bouquets of flowers along the road and expressing words of gratitude when the statue passed.

“The people’s faces just brought tears to my eyes,” said Edward Ward, a parishioner and funeral director at Joseph A. Ward Funeral Home, who rode in another procession vehicle with Father McDermott.

The May Procession on Wheels came together very quickly, reported Father McDermott. He thought of the idea after seeing parade-style festivities for birthdays and other celebrations. He brought the idea to a Knights of Columbus meeting, and the Knights volunteered to participate.

“It certainly wasn’t about us,” said Ward. “It was about the Blessed Mother and all mothers.”

As for the procession route, Father McDermott wanted to reach as many people as possible. He made a point of passing Immaculate Conception Church in Marcus Hook and Holy Savior Church in Linwood, as well as St. John Fisher Church.

The three parishes merged into one at St. John Fisher in 2013.

With this in mind, Father McDermott drew up a parade route, staying off main roads to avoid upsetting traffic. He test drove the route himself, as did the police and other participants.

Ward made the initial connection with the local police departments. Father McDermott said the police “are always happy and very helpful” for community events like the May procession, as the events “help build up safe, healthy community” and law enforcement “keep everything safe along the way.”

The procession began and ended with several police escorts. At its very heart were three vehicles donated by Pagano Funeral Home in Garnet Valley and Minshall Shropshire-Bleyler Funeral Home in Media.

The first carried speakers playing Marian hymns. The center truck securely carried a statue of the Blessed Mother, with a bouquet of fresh flowers in her arms. Immediately following was an open car filled with more fresh flowers.

Father McDermott was “so pleased to see how people gathered as families to honor the Blessed Mother” and their own mothers. He said as families went outside for the procession, they were also “witnessing to the faith” to their neighbors.

St. John Fisher Parish advertised the procession on the parish’s Facebook page. Many were awaiting its arrival, but still others witnessed the devotion as a surprise while driving in their cars or taking a walk.

These reactions were “respectful and spiritual,” said Father McDermott.

“It’s amazing how their hearts open up … Other (parades) drive by and they don’t have that same reaction,” he said. He observed that this too is “a good witness to the faith.”

One woman had a particularly impactful encounter with the May procession, which Father McDermott and Ward witnessed.

The woman pulled her car over to the side of the road to make way for the procession. When she saw the statue of the Blessed Mother, she immediately broke down into tears.

“If no one else saw this today but that lady, it would have been worth it,” Ward said to Father McDermott, both of whom were brought to tears by the encounter.

People are thirsting to return to in-person Mass and the sacraments, Ward observed, and the procession was a good way to bring the devotion to people as they cannot gather inside churches.

Father McDermott said the May Procession on Wheels showed that such devotions play an important part in people’s lives and in parish life.

The small and simple procession was a good devotional way to celebrate Mother’s Day in a time of social distancing, for the Blessed Mother and all mothers, Father McDermott said.

PREVIOUS: Babies get a boost with donated diapers, formula