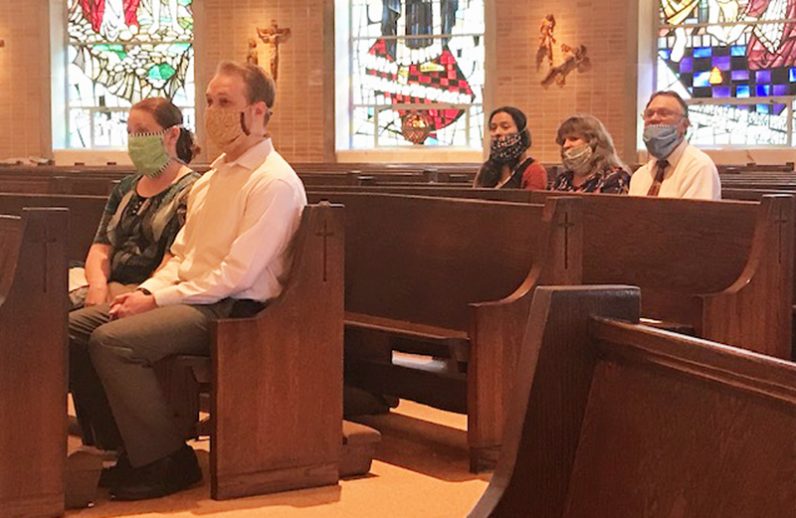 Eric Germiller and his fiancee and RCIA sponsor Lisa Limmina (front row) and members of their family attended a May 23 Mass at St. John Chrysostom Parish in Wallingford, during which Germiller was received into the Catholic Church. While fewer than 10 participants were in attendance, the parish — and all others in the Archdiocese of Philadelphia — will resume public liturgies on June 6 according to directives developed by the archdiocese and health officials.

Area faithful are anticipating the resumption of public Masses with a mixture of joy and anxiety, along with many questions as to what liturgies will look like in a “new normal” reshaped by the coronavirus pandemic.

In a May 22 announcement, the Archdiocese of Philadelphia advised that the celebration of public Mass would resume in archdiocesan parishes on the weekend of June 6-7.

Public liturgies throughout the archdiocese had been suspended effective March 18 as part of nationwide efforts to contain the spread of the deadly coronavirus, which has now killed more than 348,000 and infected close to 5.6 million worldwide.

With the number of statewide cases gradually leveling off, Pennsylvania Gov. Tom Wolf has implemented a three-phase, county-by-county plan to lift COVID-19 restrictions. The five counties that comprise the archdiocese are set to enter the intermediate “yellow” phase on June 5, with gatherings limited to a maximum of 25 people.

In its official statement, the archdiocese did not specifically address the issue of congregation sizes, but guidelines are expected to emerge this week.

They are particularly important for a faith in which “physicality matters,” said Jessica Carney, a Catholic writer and member of St. Colman Parish in Ardmore.

Carney said she “can’t wait to be in the church … present in front of the Eucharist,” a sentiment echoed by dozens of area parishioners who told CatholicPhilly.com that receiving holy Communion was what they most looked forward to about the return to in-person Masses.

Longing for the Eucharist

“I never realized how much I took Mass and the Eucharist for granted until I didn’t have it,” said Roselee Maddaloni, a member of Nativity of Our Lord Parish in Warminster and principal of that parish’s school.

“We need the Eucharist,” said Paul Israel Forsyth of St. Katharine Drexel Parish in Chester. “We can take precautions and still do this.”

While he had “understood to a degree early on” the reasons for the COVID-19 restrictions, Forsyth said the resumption of public Masses was essential.

“If we live in fear, we will lose the greatest avenues of grace we need,” he said.

Several older adults noted that even their heightened susceptibility to the virus would not prevent them from receiving holy Communion as soon as possible.

“I am a senior but I walk by faith and can’t wait to go back,” said Janice Thomas, a member of St. Athanasius Parish in Philadelphia.

Ruth Campbell Spitzer of Our Lady of the Sacred Heart Parish in Hilltown agreed.

“I’ve said I’d rather die because of coming out to receive Jesus than from going out to the grocery store,” said Spitzer. “I believe in precautions, but also think of the underground church both in ages past and current. Can we be as brave?”

‘It is too soon to open our churches’

No, said many other area parishioners, who expressed serious reservations about the prospect of social interaction in groups of any size at this point.

“I do not feel comfortable going to Mass and won’t be for a long time, just like I won’t be first in line for restaurants,” said Nancy Tomaszewski, a parishioner of the Cathedral Basilica of SS. Peter and Paul in Philadelphia.

Bob Holmes of St. Ephrem Parish in Bensalem said that “it is too soon to open our churches,” since “the pandemic is roaring across the nation and so far there is no cure or vaccine.”

“I personally will not return to Mass, nor will I allow my children,” he said. “I think we should wait until fall at the earliest.”

Others said they worry that health issues could increase their chances of contracting the virus.

“I feel it is too early, especially for elderly people like me with pre-existing conditions,” said Daniel Longo of St. Mary of the Assumption Parish in Phoenixville. “I don’t want to sin by not going physically to Mass, but (I) am concerned about catching the virus. This has me very anxious and upset.”

Longo also asked if the current dispensation from the Sunday obligation would remain in place so that he and others like him could “worship in the online Masses.”

Kathleen Ardiff Lochner of St. David Parish in Willow Grove was also hesitant about returning to the pews.

“I miss the Eucharist the most,” she said. “However, as a senior with underlying medical conditions, I’m reluctant to return until I feel safe to do so.”

Several said they will defer their decisions to return until more information becomes available — among them, Jane McCaughey of Our Lady of Mount Carmel in Doylestown and Patrick Cosgrove of St. Patrick Parish in Kennett Square.

McCaughey said she’ll “see how it goes next month or so,” while Cosgrove stated that as a 60-year-old with asthma, he will “wait it out till it’s an obligation again.”

Steven Boell of St. Maria Goretti Parish in Hatfield said he first “(wanted) to see the protocols,” especially after a number of priests at a Texas parish tested positive for COVID, with one dying of possible coronavirus.

Sacraments at a social distance

Whether they plan to attend in-person Mass or stay at home, a number of area faithful said that social distancing in churches will be critical, especially during the distribution of holy Communion.

“How can you possibly line up to go to the altar to receive Communion from the priest safely?” asked Janet Healy Celini of St. Ignatius of Antioch Parish in Yardley.

Stressing that she “missed the Eucharist,” she suggested that “parishioners might need to be assigned (to) certain Masses.”

Susan Dutton of St. Thomas More Parish in Pottstown also asked if “we should be sterilizing between each individual’s reception of Communion, or putting Communion on a paten.”

Area faithful were enthusiastic about the livestreaming of liturgies during the COVID-19 lockdown, with many calling for their continuation even after public Masses have resumed.

“While the physical church will be open, I do believe a broader outreach is in (order) for those who are not going to be comfortable for some time,” said Eileen Forbes of St. Anastasia in Newtown Square.

After weeks of daily and Sunday livestreamed Masses, “we are going to continue … so the sick of our parish and those who are homebound can feel part of our community,” said Tracey Ellen of St. Charles Borromeo Parish in Bensalem.

Carney said the broadcasts had a catechetical benefit.

“It was very educational for our children to be able to see the altar up close,” she said. “The camera angles afforded a better view than we normally have in the pew.”

However, others were ready to go offline and head for their parish churches.

“I feel more like a spectator rather than a participant,” said Michael J. Kurtz of Immaculate Heart of Mary Parish in Philadelphia.

Mike Gillespie Jr. of St. Philip Neri Parish in Philadelphia attended livestreamed Mass and prayer services, but said for him such “online resources are generally insufficient and don’t really provide any sense of communion.”

Yet parishes will likely need to offer a “hybrid” schedule of both livestreamed and in-person Masses for the next several months, if not longer. Despite more than 100 research efforts in now process, most experts believe that a COVID-19 vaccine will not be widely available before mid-2021 at the earliest.

Until the virus can be prevented and treated on a broad scale, dioceses and parishes must be prepared to adapt to a still-evolving crisis, while continuing to minister to the faithful.

The task will require both courage and creativity.

“Each parish is unique and needs to figure out how best to return to safe worship and the holy sacrifice of the Mass,” said Dutton.

Let us know your thoughts by joining the conversation on CatholicPhilly.com’s Facebook page.

NEXT: Efforts to build ‘culture of vocations’ succeeding online