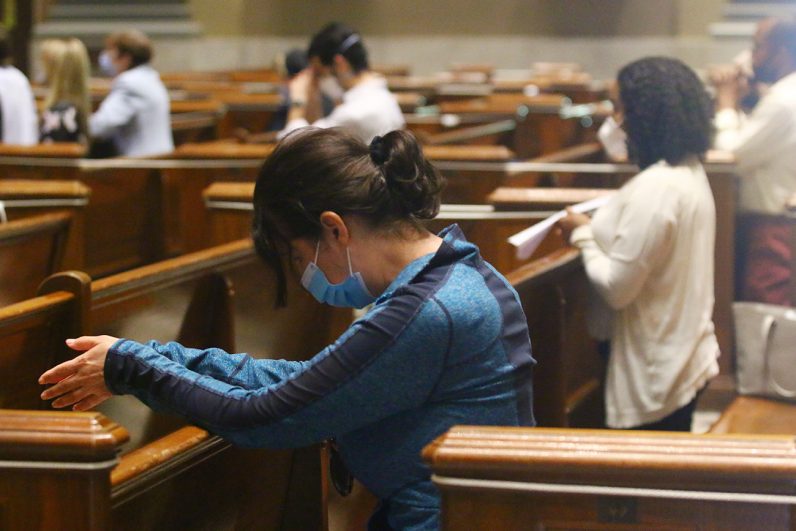 Jennie Pelino prays during a June 10 Mass at the Cathedral Basilica of SS. Peter and Paul, one of the Philadelphia Archdiocese’s first in-person liturgies since the beginning of the stay-at-home order in Pennsylvania due to COVID-19. On June 26, the five-county archdiocesan area will enter Pennsylvania’s “green” phase of COVID restrictions, allowing churches to host up to 75% of their building occupancy at gatherings. (Photo by Sarah Webb)

With Southeastern Pennsylvania moving to the “green” phase of COVID restrictions June 26, the Philadelphia Archdiocese is modifying some – but not all – of its precautions for worship.

Concerns for sanitation, social distancing and limiting building occupancy will remain important to the celebration of Mass and the sacraments, said Father Dennis Gill, director of the archdiocesan Office for Divine Worship.

But more of the faithful will be able to return to the pews, as occupancy limits for houses of worship will increase from 50% to 75% during the state’s “green” phase, which corresponds with the archdiocesan “open” stage.

Philadelphia county has entered a modified “green” phase, keeping some restrictions in place until July 3.

On Friday, Mayor Kenney signed an order making face masks mandatory for all indoor public spaces and in outdoor settings if members of different households are less than six feet apart. The action was prompted by a recent increase in the number of the city’s coronavirus cases.

None of the updated archdiocesan guidelines “conflict with what is restricted in Philadelphia from June 26 to July 3,” said Father Gill in a June 25 webinar that drew more than 600 participants.

In this new period, he said, “the faithful continue to be dispensed by Archbishop Nelson Perez from the obligation to attend Mass on Sundays and holy days until further notice.”

Father Gill stressed that “several weeks’ notice will be provided” as to when this obligation will be reinstated.

In the meantime, those who are sick or “compromised due to health conditions” are not to come to church, he said.

All areas of the church, especially high-touch areas, are to be sanitized regularly, said Father Gill. Six feet of distance all around should be maintained between members of different households.

Whether in the pew or at home, faithful should remember “to keep holy the Lord’s day with prayer and reflection,” and to participate in livestreamed Masses.

“If there’s a silver lining in COVID-19 precautions, it is that many have been re-catechized as to the obligation to worship the Lord on Sunday,” said Father Gill.

Except for celebrants, liturgical ministers and children aged two and under, those attending Mass are “strongly encouraged” to wear a face covering or mask throughout the liturgy and the celebration of other sacraments.

Masks should be removed for the reception of holy Communion, which will continue to be available to congregants only under the species of the host, since the distribution of the Precious Blood remains suspended.

Faithful are also “strongly encouraged” to receive in the hand — a point that has sparked “a lot of controversy,” said Father Gill, who urged webinar participants to recall that the sacrament was “an encounter with the Person … of the Risen Lord.”

Gloves are not to be used for the distribution of holy Communion, he said, and despite the “strong recommendation” otherwise, “no one is to be denied reception of Communion on the tongue.”

Distribution of holy Communion to the homebound and those in medical facilities may resume, he said, provided recipients, facility staff and ministers are in agreement.

Weddings and confessions may continue to take place on Sundays, and adoration chapels may now reopen.

Parishes wishing to celebrate outdoor liturgies must request permission through the Office for Divine Worship.

As in the previous phase of precautions, liturgical singing should be “kept to a minimum” due to ongoing concerns of aerosols and droplets that may be expelled, although studies in that regard remain “inconsistent in their conclusions,” he said.

Holy water fonts are to remain unfilled, and pews should be free of hymnals, missalettes and envelopes, said Father Gill.