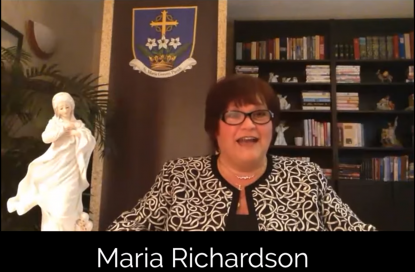 Maria Richardson presents during a virtual Life in the Spirit Conference, part of the Catholic Charismatic Renewal in the Philadelphia Archdiocese — and beyond.

The virtual Life in the Spirit Conference, which started May 4 and continues until June 22, would have been counted a success by organizer Maria Richardson if 20 participants signed up. On the first night of the eight-week conference, over 350 people joined.

Now some 470 people are registered for the conference, open to all, “ages 16 to 96,” Richardson said. The majority of participants come from the Archdiocese of Philadelphia, while others come from 12 states as well as India and Kenya.

Father Steven DeLacy spoke to participants about receiving prayer through laying of hands, which happened virtually during the most recent session. “God is able to transverse the distance and the electronics in such a way that it can be still just as powerful as if we’re gathered in a prayer meeting,” he said.

The online conference is an alternative to the Life in the Spirit seminars — a part of the archdiocesan Catholic Charismatic Renewal. Interestingly, Richardson said in-person seminars usually drop in attendance as the weeks go on but through the virtual experience, attendance is rising.

The online conference sessions usually consist of an opening prayer, a talk from a conference team member followed by a virtual small group meeting, and a closing blessing and prayer from Father DeLacy. Live praise and worship music, provided by Russell and Gina Montalbano of Bethany Music Ministry along with their children, also opens and closes the sessions.

In-person Life in the Spirit seminars also include prayer, talks and small groups. After the seminar ends people typically join a prayer group that continues to meet, and this often becomes a life-long activity, according to Richardson.

The virtual Life in the Spirit Conference team also plans to form a virtual prayer group after the conference ends, as well as connect people to local, already-established prayer groups.

Richardson speculates on several reasons why the online conference is gaining such high numbers.

Sessions are livestreamed on Monday nights at 7:30 p.m. and are recorded and uploaded online, except for the small group meetings, which are not recorded.

This allows for flexibility in participation. She has received emails from people who could not tune in live on Monday nights, and she directed them to participate through the recorded sessions during a time of the week that works for them.

She also reported many people inviting family and friends. Because sessions are recorded, people can register at any point of the conference and watch past sessions at their own pace. Evidence of this is seen in the more than 100 people who joined after the conference’s first week.

“If someone wants to start today, they can!” said Richardson.

She added that the conference team plans to make recordings of the online conference available to parishes. This will enable them to run a conference of their own without bringing in additional speakers. They can play the recorded videos then organize their own small groups.

In addition, others plan to run more virtual Life in the Spirit Conferences in the future.

“The conference for many people will be life changing,” Richardson said.

In the session from the second week, she recounted the story of when as a young adult she was at a train station in Philadelphia and saw a young soldier dressed in his uniform with a duffel bag. She felt compelled to give him the “Pieta” book she had, which contained many prayers including an Act of Spiritual Communion.

At first she thought giving the book to a total stranger was crazy, but eventually she did.

After she explained the book to the soldier and sharing that it contained how to make an Act of Spiritual Communion, the soldier looked her sincerely in the eyes and thanked her. He said he was about to board a ship for an extended period of time, he had been unsure how he could endure without the graces from Communion and Mass, and was pleased that Richardson told him how he could have communion with God.

Richardson was “blown away” and in awe of what God could do with such a small act from her that “was obviously so huge for him.”

“God can affect every single situation in our life and … every single stranger that we will ever meet, but we need to invite him in,” she said.

This conference helps people grow in their relationship with the Lord, not only the Holy Spirit but also Jesus and the Father, Richardson said.

Her interaction with the young soldier was a powerful one that Richardson called an “everyday” story, because she said she has 20 others just like it.

“God is always doing something … If you allow him to use you and to be a part of your life, he does amazing things,” Richardson said.

In the conference she tells the story of the soldier because it’s something she did as the Lord told her to do, just as St. Paul in his time did often, “but it happened then. This is happening now.”

The conference helps people to see that these workings of the Holy Spirit aren’t just for the Biblical saints. “It’s for now, and the world needs them.”

Register for the Virtual Life in the Spirit Conference or watch recorded sessions here.

NEXT: Moms from 3 parishes meet virtually to study Bible, learn of Mary