Power of prayer revealed after sentencing of abusive ex-priest 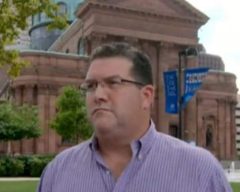 A few months back I wrote about my experience meeting Archbishop Nelson Perez as a survivor and the area representative of SNAP (Survivors Network of those Abused by Priests). In the commentary I also wrote about my shortcomings and having served a period of incarceration in Bucks County for an offense against the Archdiocese of Philadelphia.

If someone had told me 10 years ago that one day I would be sitting in the same Court of Common Pleas to watch one of my abusers being sentenced, I would have had a laugh. Incredibly, that is exactly what happened.

Francis X. Trauger, 75, had been removed from active ministry in 2003, laicized in 2005 following allegations of sexual abuse of minors. Charges of indecent assault and corruption of minors in Bucks County were brought in September 2019 and this past week Trauger was sentenced to prison.

I was the only victim of Trauger present in the courtroom on July 8. Of course, there was the usual gathering of media and a few law students observing the proceeding. I was truly fortunate to have had three of my fellow advocates sitting alongside me.

I heard a powerful recording of a victim’s impact statement that was played in the courtroom. I was overcome with anxiety and relived many of the experiences the victim and I had in common as I listened. Using some coping skills, I found myself in thought during the hour-long proceeding and how this man affected nearly every aspect of my life. I remembered the hard work I have done to be able to be present for this today and turn the negatives in my life to a positive.

Thoughtfully, I ran through a list of people who had helped me in my recovery from addiction, and I took a deep breath as I recalled the strength my wife and son had in that process. I remembered those who I confided with and encouraged me to own my truth. My spiritual advisor, Father Jim Paradis, O.S.A., and IRRP advocate Lynn Shiner were certainly on that list, as too was the Office for Child and Youth Protection for the archdiocese.

The common denominator in every one of these individuals was faith in God. I remembered a phrase that Archbishop Perez used at his installation Mass: “So wherever you find yourself on your journey … it is time to reach out and grab his hand, the Lord’s hands.” And so I did just that at the very moment Judge Finely handed down the 18- to 36-month state sentence to Francis Trauger. Almost instantly, my right hand was warmed, and I felt a power returned to my soul.

As I watched the defendant being led out of the courtroom in handcuffs, I felt sorry for his soul. He showed no remorse and could not muster a verbal apology. Trauger appeared to be in a state of shock and denial. What can I do to ease my discomfort? How am I supposed to be feeling at this moment? Where do I find these answers? Prayer was the first thing that came to mind.

On my way back to work, I stopped in a chapel and instead of praying for myself, I began asking God to guide me in what he would have me do. I asked God to help Trauger face his actions with remorse and find the willingness to repent and seek him out. This was not an easy thing to do and I had every reason not to pray. But I followed my heart.

As I knelt there in St. Ann’s, my anger and my resentment were replaced with grace. It is not a quick fix and certainly not a guarantee that these resentments will not creep up again, but in the end, I released myself from the pain he caused me. I began to think of the few days off I had upcoming and the love I have for spending time with my wife and son. That love itself is healing.

I believe in the power of prayer, and even now for those who have hurt us. We pray for these individuals because they, too, need God’s grace, love and mercy. We are all broken, wounded and in need of becoming whole, wherever we are in our journey. In doing so we also free ourselves from the pain they have caused us. Yes, this may be challenging to do, but as stated by St. Augustine in Confessions 1:4, “Lord, you grieve over wrongdoing, but you feel no pain.”

When I met with Archbishop Perez, I shared with him how strong his words were, “never underestimate the spirit of God working in you, through you and despite you.”

I continue my advocacy for survivors and to seek the truth, some transparency, some level of justice and understanding as the church continues to look for ways to heal herself. Let us all pray for survivors.

PREVIOUS: Welcome back to Mass. The church needs you more than ever

NEXT: End the tragedy of the American Indian Reservation