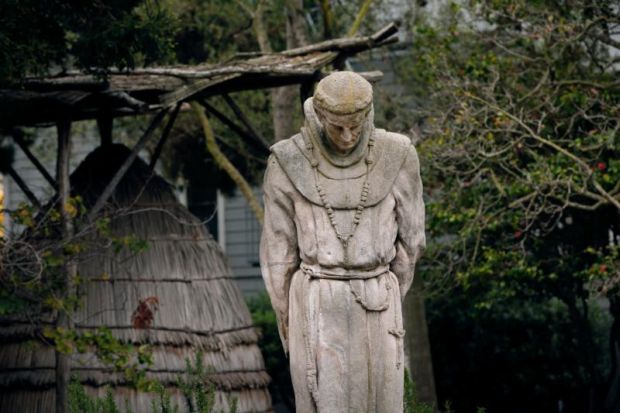 A stone statue of St. Junipero Serra by artist Arthur Putnam is seen in the cemetery and garden at Mission San Francisco de Asís, also known as Old Mission Dolores, in San Francisco. Recent racial justice protests have led to topplings and defacements of several public statues of the Spanish saint and founder of the California mission system, which evangelized and enculturated indigneous populations under Spanish rule. (CNS photo/Nancy Wiechec)

Destroying statues of St. Junipero Serra is a sign of “profound woundedness” and confusion, says a Philadelphia priest who has extensively researched the saint.

“With Serra, there’s just so much ignorance about his life,” said Father Matthew Guckin, parochial administrator of Our Lady of Mount Carmel Parish in Doylestown.

In 2019 Father Guckin spent a six-month sabbatical at two of the 21 California missions founded by Serra and his fellow Spanish Franciscans in the late 18th and early 19th centuries. Under the Spanish crown, the sites (guarded by several presidios, or military forts) sought to evangelize the indigenous people of what was then called “Alta (Upper) California.”

Within the mission compounds, converts lived in self-sufficient communities, where they were formed in the faith while learning farming, trades and Spanish culture from the Franciscans.

The missions spanned the California coast, and eventually developed into some of the state’s largest cities, including San Diego and San Francisco.

As a result Serra, who died in 1784, became “a giant figure” in California history, said Father Guckin.

The state donated a statue of Serra to the U.S. Capitol in 1931, and memorials to the saint appear on public lands throughout California.

But in the wake of recent anti-racism protests, several Serra statues have been defaced or toppled, and his legacy has been denounced as one of oppression against the indigenous peoples.

Such attacks overlook the good that Serra accomplished among the larger forces that shaped both the saint and his role, said Father Guckin.

“He was both a man of his time and of eternity,” he said. “We’re all born into a cultural milieu, and into certain geopolitical circumstances.”

‘The Gospel in an era of colonization’

Father Guckin noted that Serra “tried to proclaim the Gospel in an era of colonization,” one in which European powers such as Spain controlled vast geographic areas in the Americas. 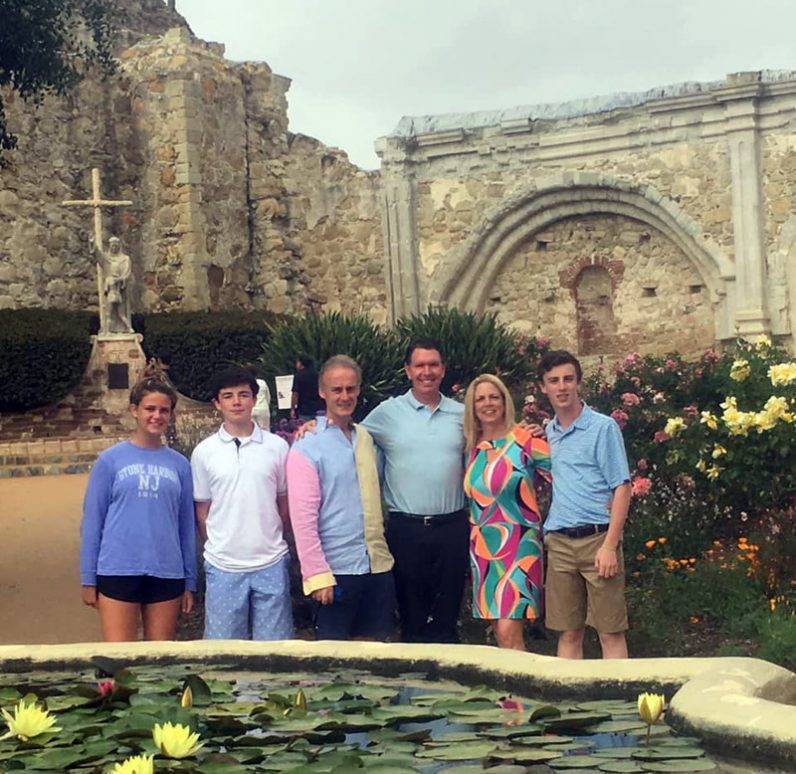 Although the Spanish crown relied heavily on missionaries in its expansion, church and state were not necessarily in lockstep, according to Franciscan priest, scholar and archivist Father Francis Guest.

Spanish monarch Charles III “thought the church should be brought more firmly and securely under the control of the state,” wrote Father Guest in one of his numerous essays on Serra.

At the same time, divisions within the church itself were also at work. The Franciscan missionaries were traditionalist and scholastic in their theology, while the king and his ministers were Catholics of the Enlightenment, who sought to “bend these religious more completely to the royal will,” according to Father Guest.

Amid such political, cultural and theological currents, Serra approached the indigenous peoples in the only way he knew how, and with the hope of “making their lives better” both on earth and in eternity, said Father Guckin.

As part of his catechesis, Serra “cultivated a sense of beauty” through prayer gardens and music, seeking to “elevate the lives of the indigenous peoples,” said Father Guckin.

San Francisco Archbishop Salvatore Cordileone, responding to the June 19 toppling of a Serra statue in that city, said that the saint had made “heroic sacrifices to protect the indigenous people of California from their Spanish conquerors.”

Over the decades, however, critics have often labeled these efforts as ultimately genocidal. Writing in 1946, American journalist Carey McWilliams claimed that “the Franciscan padres eliminated the Indians with the effectiveness of Nazis operating concentration camps.”

Researchers on both sides of the Serra question concede that the saint viewed the indigenous peoples as children, an attitude common among Europeans of the time. They also note that Serra – who favored austere self-mortification – endorsed and practiced corporal punishment, which was widespread throughout European society. In addition, contact with Europeans introduced diseases against which the indigenous peoples had no immunity.

However, several scholars point out that comparing the missions to World War II death camps neglects key evidence to the contrary.

McWilliams based his assessment (which quickly gained popularity) on the work of physiologist Sherburne F. Cook, who wrote that the “fruit of the Indian labor was devoted to the welfare and improvement of the Indian himself.”

Cook, himself a detractor of the mission legacy, also noted that the Franciscan centers were in practice “much closer to socialism or communism, in the Marxian sense, than slavery.”

‘Messiahs, scapegoats’ and a complex truth

Evaluating Serra without regard for his overall context or for modern-day biases leads to troubling inaccuracies and one-dimensional conclusions, said Father Guckin.

“We live in a society of messiahs and scapegoats,” he said. “We tend to look at one political party or figure as a savior, and on the other hand, we look at another as a scapegoat for everything.”

Consequently, “Serra doesn’t just get a disproportionate share of the blame; he gets all of the blame,” said Father Guckin.

In contrast, he said, “the truth is that these are very complex issues.”

Historians also caution against “presentism,” or the tendency to interpret the past strictly through the lens of current concepts and values.

“Our forbears constantly fail to measure up to our present-day standards,” wrote Lynn Hunt, former president of the American Historical Association, in a 2002 essay.

The California Catholic Conference echoed Hunt’s observation, declaring in a June 22 statement that Serra protesters had themselves “failed” the test of history.

The bishops noted that Serra had worked on behalf of the indigenous population “against an oppression that extends far beyond the mission era,” and cautioned that “virtually every historical figure from our nation’s past” would have to be removed to comply with modern criteria for approval.

For Father Guckin, Serra’s greatest legacy remains the faith that he inspired in those he sought to evangelize.

“The ultimate tribute was really at Serra’s funeral, to which indigenous people flocked,” he said.

During his sabbatical, Father Guckin interviewed a descendant of those converts: Andy Galvan, curator of Old Mission Dolores in San Francisco.

“Andy told me, and I quote, ‘Father Serra should be canonized, because he loved us,’” said Father Guckin.