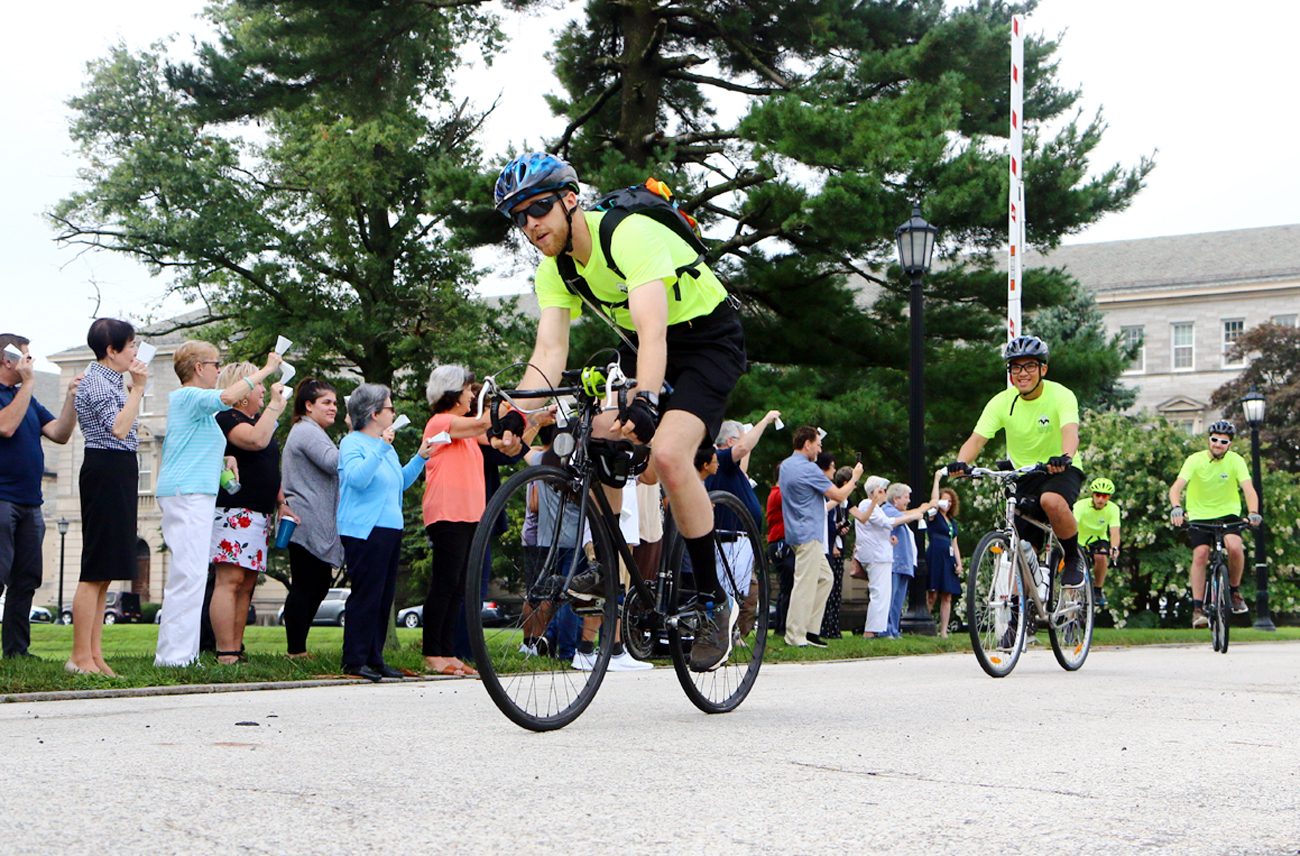 Seminarian cyclists leave St. Charles Borromeo Seminary in Wynnewood in 2019 for the first leg of their Biking for Vocations tour to promote vocations to priesthood and religious life. This year, two groups of seminarians will expand into two routes visiting 16 archdiocesan parishes, beginning Aug. 5. (Photo by Sarah Webb)

Bringing new meaning to the phrase “prayer in action,” a group of seminarians is gearing up for the second annual Biking for Vocations event next week in the Archdiocese of Philadelphia.

This year the five-day event from Wednesday, Aug. 5 to Sunday, Aug. 9 expands into two separate cycling routes across the five-county archdiocese.

A 150-mile city/suburban route through Philadelphia and the northeastern suburbs will include seven seminarians visiting nine parishes.

A longer route, tracing the perimeter of the archdiocese, will span about 210 miles as three seminarians and Father Cooke visit nine other parishes mostly in Chester, Bucks and Montgomery counties.

Both begin Aug. 5 at St. Charles Seminary. After prayers for safety and cheers of encouragement by seminary staff and well wishers, the first group of riders will depart the seminary and begin cycling to their first stop, St. Monica Parish in South Philadelphia.

After a break of up to two hours for lunch, a prayer service with parishioners and time to speak with them – especially with youth and young adults about discernment of a vocation to priesthood and religious life – the men will ride north to parishes in Philadelphia and suburban Bucks and Montgomery counties for a similar agenda.

While they are travelling from the seminary to South Philly, a second group will be riding due south onto the country roads of the southern and western suburban parishes, with the first stop at St. Cornelius, Chadds Ford, Delaware County.

Full days of bike riding and overnight stays at several parishes will conclude on Sunday, Aug. 9 as the two tours converge in Center City Philadelphia at the Cathedral Basilica of SS. Peter and Paul, greeted there by Archbishop Nelson Perez.

Also new this year is the addition of two special guests riding with the seminarians: Bishop John McIntyre, who will join the city/suburban route on Aug. 6 and 7, and Bishop Joseph Coffey of the Archdiocese for the Military Services and a Philadelphia-area native, riding on Aug. 7.

Bishop McIntyre will lead a eucharistic holy hour Thursday evening at St. Frances Cabrini Church in Fairless Hills, while Bishop Coffey will do so at Nativity at Our Lord Church, Warminster, on Friday evening.

The goal of the event is to raise awareness of vocations and encourage Catholics to pray for seminarians as they see healthy, happy young men hitting the road to meet people in their home parishes.

The event helps to build a culture of promoting vocation, which is the mission of the archdiocesan Office for Vocations to Diocesan Priesthood, which sponsors Biking for Vocations.

Below is the complete itinerary for the event. All the faithful are invited to contact the nearest parish listed to find out how they can welcome the seminarians at a safe, social distance, and to keep them in prayer.

PREVIOUS: Archdiocese plans for schools to reopen with flexibility

NEXT: Persons with disabilities see progress, challenges as ADA turns 30