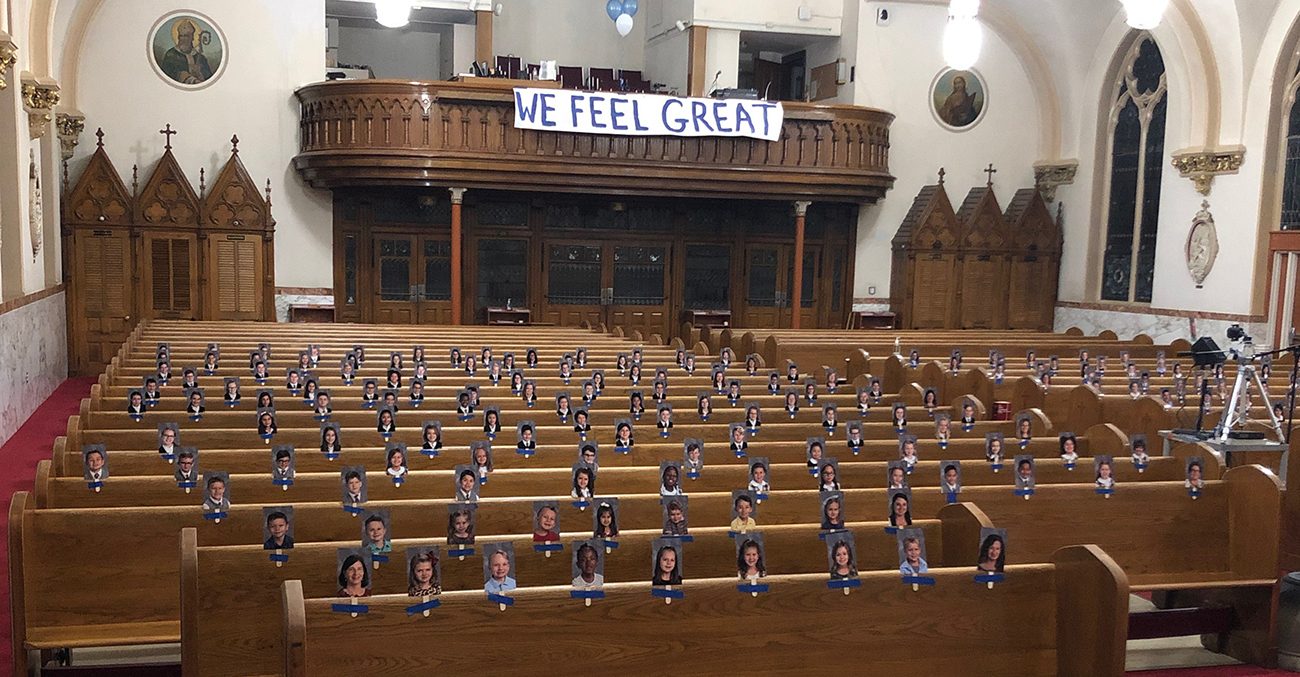 The virtual presence of school children in St. Aloysius Church, Pottstown is shown in a photo given as a gift of the Home and School Association to Father Joseph Maloney, parish pastor, and Father Francesco D'Amico, parochial vicar.

How did your parish respond to the COVID 19 shut-down? Was it as if they put a “Gone Fishing” sign on the rectory door and left unanswered were telephone messages or emails?

Let’s hope that was not the case, but clearly some parishes and schools did a much better job than others in keeping in touch and providing services under challenging conditions.

Take for instance St. Aloysius Parish in Pottstown, where under the leadership of Father Joseph Maloney as pastor and Bonnie Delciotto as school principal, it is virtual business as usual, and it’s paying big dividends.

For one thing, weekly offerings were about 85 percent of normal, according to Father Maloney, which is definitely not the archdiocesan-wide outcome. The school, through preregistration, will actually show an increase in enrollment this fall.

This included all Masses that were designated by parishioners for a special intention.

An interesting innovation during the livestreamed daily Masses is that instead of celebration at 8:30 a.m. as usual, they were celebrated at 7 p.m.

Normally these daily Masses attract 40-75 people. By switching them to the evening and livestreaming they attracted between 150-200 people.

In addition, with the assistance of parochial vicar Father Francesco D’Amico and Permanent Deacon George Harmansky, there was a daily rosary service, some in Spanish and with daily reflections, all livestreamed.

The church itself was open 24 hours a day if anyone wished to drop in for prayer. And everyone in the Western Montgomery County parish was kept up to date by daily emails and text messages.

Were the parishioners appreciative? So many people were leaving foodstuffs and other supplies at the rectory door for weeks that the clergy didn’t have to do any grocery shopping, Father Maloney said.

St. Aloysius school is not particularly large, but it is strong, thanks to the leadership of Delciotto as principal and her staff, according to Father Maloney, who gives much of the credit for successful school operations during the pandemic to his principal.

When a probable shut-down loomed and the school was preparing for distance learning, “We got the teachers together, we surveyed the parents to see if they needed supplies,” Delciotto said. “We were able to offer the families the technology they needed. In the end, all of the academic classes were offered as well as art, physical education and music.”

The school held its annual May procession, although virtually this year, and a Mass with pictures of all the individual school children arranged by class with their teachers’ photos in the pews, thanks to having them all printed up at Walmart from school photos.

“We surveyed the parents to see how things were going and fixed anything as needed,” Delciotto said. “We probably had 99 percent attendance. Our eighth grade students put together virtual Stations of the Cross, we had a virtual Mass for the students every other Friday and we had a virtual Field Day,” she said.

The eighth-grade graduates saw their pictures in cap and gown on signs on the school lawn, “and all of the other classes made cards for them,” Delciotto said.

“The parish and the school community really worked together in this time of uncertainty and really learned from each other,” she said.

The was even a surprise teacher appreciation day. “All of the teachers came in for a meeting and many parents came and drove through in cars with signs honoring them,” she said.

Interesting, while St. Aloysius School ended the year with 235 students including the graduating eighth graders, based on preregistration and indications, it now expects to open in the fall with a possible 250 students, according to the principal.