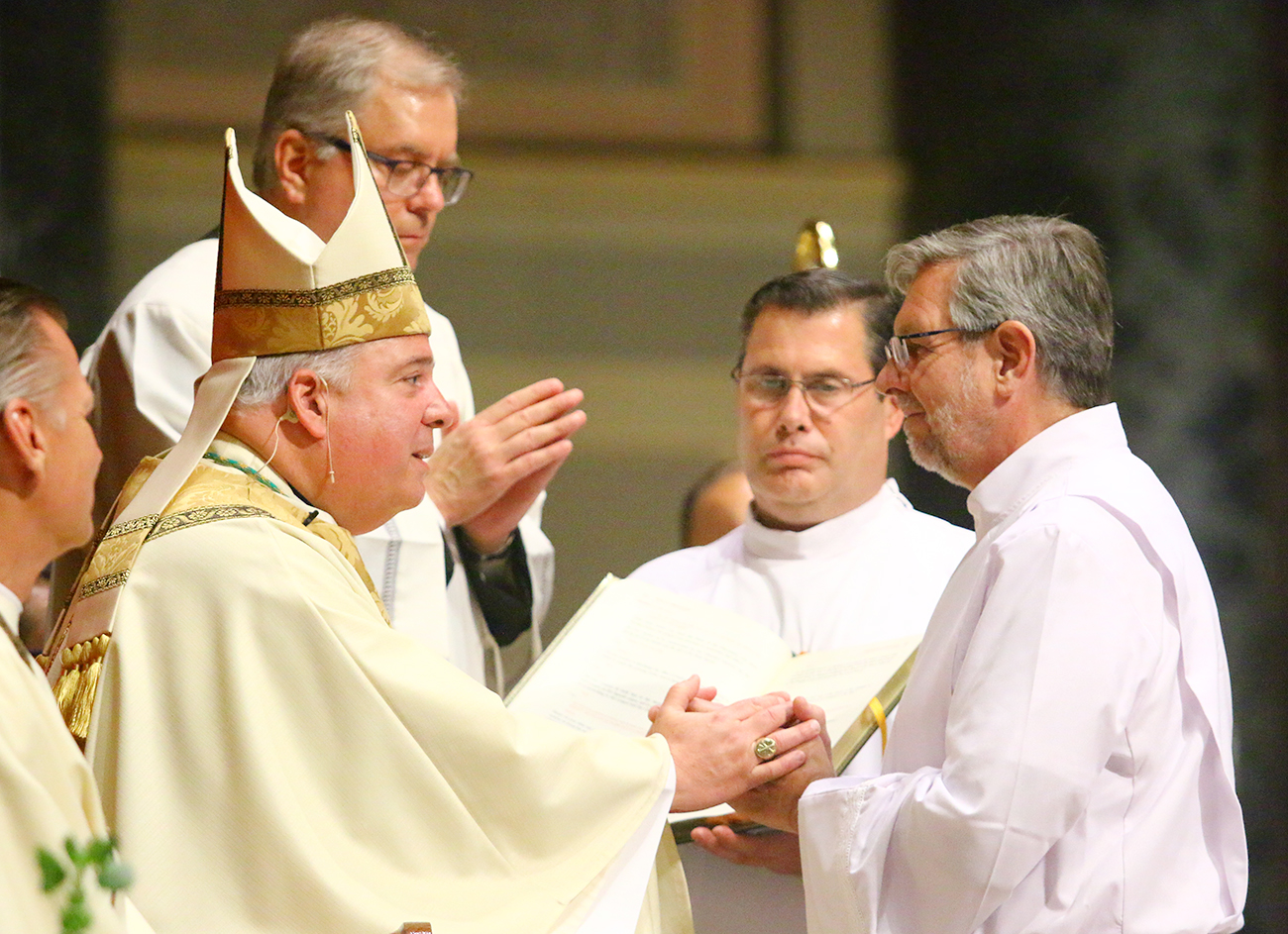 Franz Fruehwald makes the promise of the elect to Archbishop Nelson Perez during the permanent diaconate ordination Mass at the Cathedral Basilica of SS. Peter and Paul, June 13. As the chief financial officer of archdiocesan Catholic Social Services, Fruehwald is one of some 75 Catholic Charities USA professionals who also serve as permanent deacons. (Photo by Sarah Webb)

A longtime archdiocesan staffer, newly ordained as a permanent deacon, says he’s blessed to serve those in need through a ministry of both spreadsheets and sacraments.

Fruehwald has spent more than 30 years at CSS, balancing the books and heading up its IT division for 12 years before being appointed as CFO.

Managing the money behind CSS’s array of services – which broadly support families, youth, immigrants, persons with intellectual disabilities and those experiencing homelessness and hunger – is a sacred stewardship, he said.

“I came here looking for a job, and then quickly realized it was really a natural extension of who I was as a person, as a Catholic,” said Fruehwald.

Eight years ago, while immersed in budgets and strategic planning for CSS, Fruehwald discerned a call to the permanent diaconate — a summons he figured he’d missed out on decades earlier.

“I’d thought about it many years ago, but we had young children then,” he said, noting that the diaconate involves “a tremendous commitment of time” for both the candidate and his spouse. 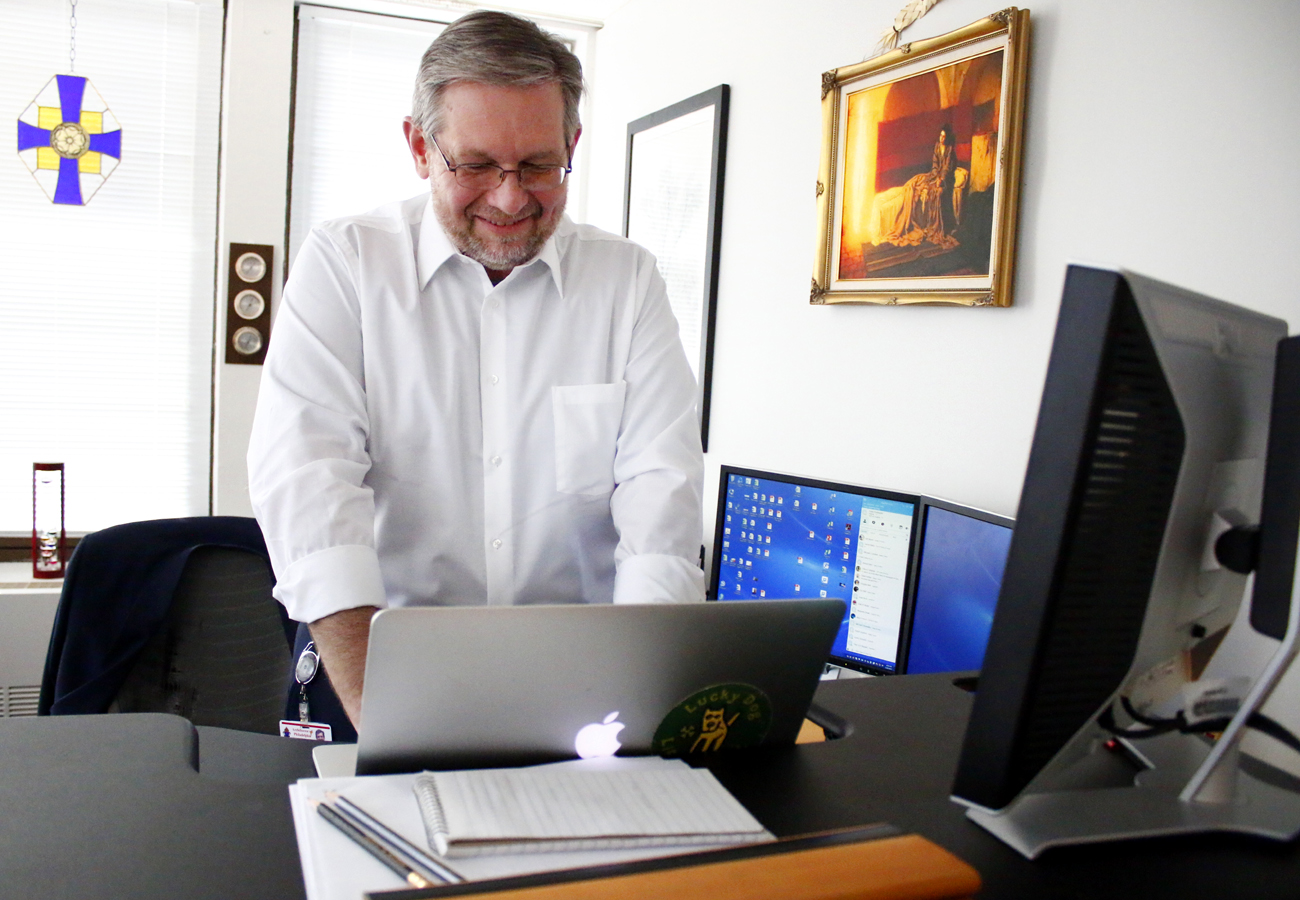 Ordained a permanent deacon in June, Franz Fruehwald, chief financial officer for archdiocesan Catholic Social Services, blends faith, vocation and career into a single ministry of service that offers help and hope to those in need. (Photo by Sarah Webb)

“Back then, I told my pastor about my possible vocation, and he said, ‘That’s fine, but consider the time and energy this requires,’” said Fruehwald. “So I thought, ‘He’s probably right. I’ll wait.’”

While raising their family, Fruehwald and his wife Marian threw themselves into parish life at St. Cecilia in Philadelphia, volunteering for various activities. After their children were grown, Fruehwald’s interest in the diaconate revived, but he concluded that he was ineligible since he was over the age limit of 50.

However, a chance encounter at the office revealed that he hadn’t “missed the boat” after all, he said.

Permanent Deacon James Owens, who at the time was the archdiocesan associate to the vicar for clergy, stopped by Fruehwald’s office to request a few updates to the permanent diaconate’s website – among them, the announcement that then Archbishop Charles Chaput had raised the age limit for candidates to 55.

“My ears perked up right away,” said Fruehwald. “I went home to my wife and said, ‘Guess what I found out at work today?’”

The couple discussed and prayed about the prospect, then arranged to attend an informational session. Shortly thereafter, Fruehwald entered into the permanent diaconate program at St. Charles Borromeo Seminary in Wynnewood, with Marian by his side “all the way,” he said.

“For a permanent deacon, his wife has to be on board,” said Fruehwald. “I would not have been able to do this if it were not for Marian. She came to class with me, sat next to me, studied with me.”

Working full time as he completed the intense, seven-year formation track, Fruehwald occasionally had moments when he questioned his vocation.

“I think it’s normal to wonder, ‘Is God really calling me here?’” he admitted. “But you take it a day, a month, a year at a time, and as you get further into it, those questions start to get answered.”

Ordained in June by Archbishop Nelson Perez, Fruehwald is now weeks into his ministry at Queen of Peace Parish in Ardsley, where he and Marian moved two years ago — and where he’s just baptized his first baby.

Vocation, career and faith have blended into one fulfilling mission, said Fruehwald, noting that “the first deacons were called to tend the widows, the orphans, the poor.”

As both a member of CSS’s leadership team and a member of the clergy, Fruehwald joins some 75 other Catholic Charities USA (CCUSA) professionals throughout the nation who are also permanent deacons, among them four diocesan-level CCUSA directors.

Working for CSS dovetails beautifully with the ministry of the permanent diaconate, said Fruehwald.

“CSS serves those in need, providing help and creating hope,” he said. “That’s embodied in our mission as an organization. And that’s what deacons are called to do by Christ.”

PREVIOUS: With 8 kids, new deacon knows all about life balance

NEXT: Woman with disabilities takes her place at the boardroom table