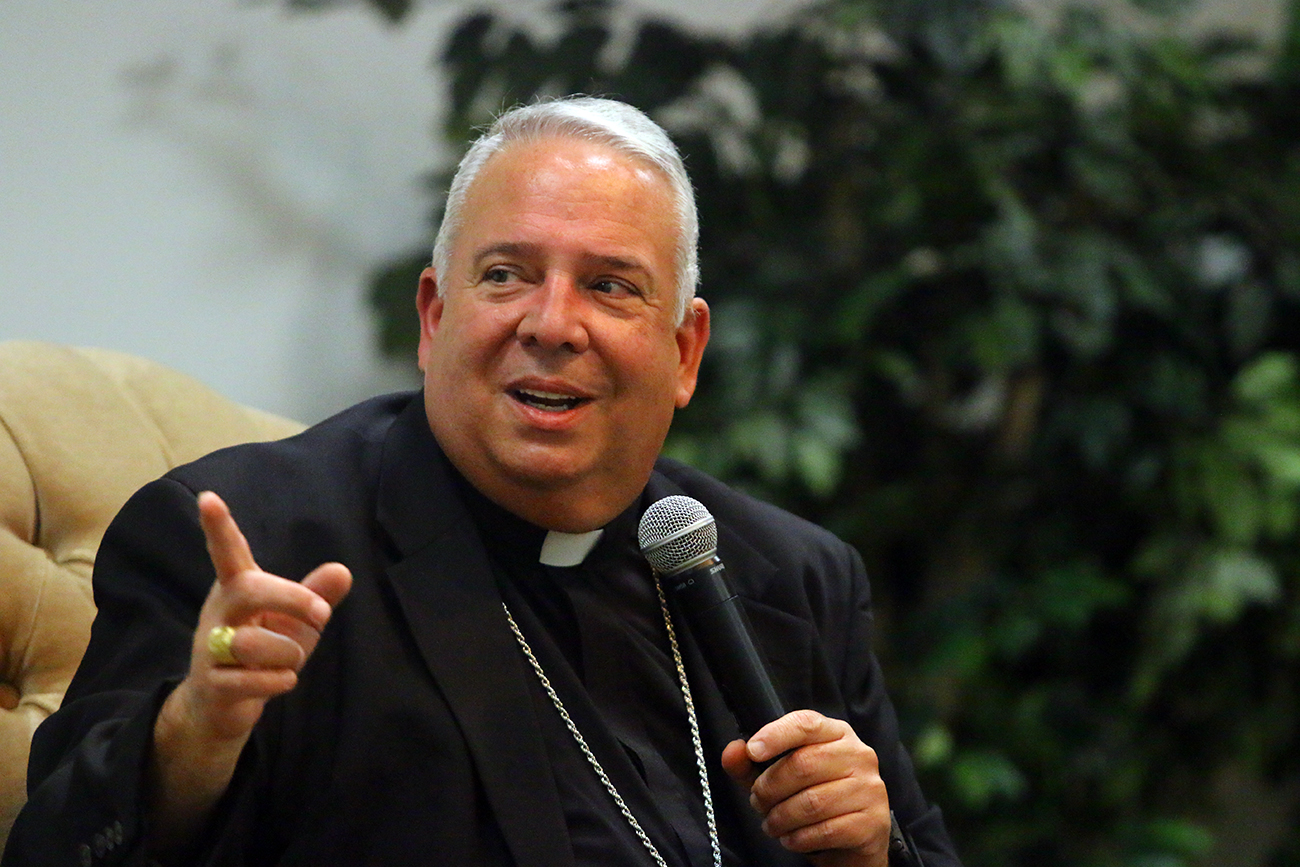 Archbishop Nelson Pérez speaks during the Aug. 25 Cardinals Forum at St. Charles Borromeo Seminary in Wynnewood. The panel discussion, which also featured several seminary professors, explored the evolving roles of both the laity and parishes amid cultural trends and challenges such as the COVID-19 pandemic. (Photo by Sarah Webb)

The laity are called to take greater responsibility for church life, as parish boundaries expand into what the Vatican calls “existential territory.”

That shift was the focus of an Aug. 25 discussion at St. Charles Borromeo Seminary in Wynnewood, where Archbishop Nelson Pérez joined panelists to assess the impact of long-term cultural trends and COVID-19 on parish life.

(See a related story: “We’re all called to conversion — especially our parishes”)

A discussion of “Co-Responsibility for the Church’s Being and Action in Parish Life” was the subject of this year’s Cardinals’ Forum at St. Charles Borromeo. Named for the seminary’s academic professorships, the annual event advances seminarians’ academic formation while educating lay faithful about contemporary concerns in the church.

Some 30 in-person attendees, along with a number of livestream viewers, listened as panelists surveyed the evolving role of the laity, drawing on documents from the Second Vatican Council; Popes Francis, Benedict XVI and John Paul II; the Canadian bishops; Notre Dame University; and the Vatican’s Congregation for the Clergy, which recently released an instruction on parish life and evangelization.

“Co-responsibility is an idea easy enough to understand,” said Father Dailey, since “by virtue of our baptism, we are all in this church thing together.”

However, he said, “it’s hard to be all in anything together when we are socially distanced. That’s the changed environment in which we now live.”

Decades before clergy shortages, declining Mass attendance and the COVID-19 pandemic, the Second Vatican Council affirmed the laity as “sharers in the priestly, prophetical, and kingly functions of Christ” (Lumen Gentium, 31).

But Haas said many, such as Pope Benedict XVI, have “lamented that the teachings of the council had yet to be fully implemented.”

The task is made difficult by “the very mystery of the church,” said Haas.

As the earthly People of God and the eternal Body of Christ, the church straddles two realities, he said. Both dimensions must be considered in order for lay faithful to be seen not only as collaborating, but actually sharing, in responsibility for the church.

Haas pointed to his own career as an example of the “natural trap” to simply view the church’s employment of Catholic professionals as a sign of greater lay involvement.

While working in the banking industry, said Haas, he was just as “co-responsible with the hierarchy in enabling the church” to fulfill its mission as he was while holding positions within the institutional church.

Haas credited his involvement in his local parish for fostering such awareness.

At the same time, said Father Dailey, parishes themselves must be seen as more than strictly geographic communities.

Quoting the Vatican’s July 2020 instruction on pastoral communities, Father Dailey said that “increased mobility and the digital culture have expanded the confines of existence … especially in younger generations.”

As a result, he said, parishes must build on lessons learned from the coronavirus pandemic — during which livestreamed Masses, video homilies and devotional podcasts became standard — and reimagine how to engage current and potential believers through digital media and formal communications plans.

Parish youth and young adults can ensure that audiovisual outreach is both compelling and cost-effective, he said.

Father Dailey also offered his services and those of several “apostolic interns” in assisting parishes in the Archdiocese of Philadelphia with the development of social communications.

Singing (and working) in unison

Nonetheless, technology alone cannot guarantee lay faithful will embrace their full calling in the life of the church, said panelists.

Knutson noted that parish music often demonstrates “the greatest disparity” between lay and clergy in terms of co-responsibility.

“In living out our vocations as musicians and clergy, we do not always see eye to eye,” he admitted.

He pointed to tendencies on both sides to “take ownership of the parish,” and to speak of “my organ, my choir, my congregation.”

Education and communication between clergy and laity can foster understanding and mutual respect, said Knutson.

Archbishop Pérez agreed, noting that in his dozen years as a Philadelphia pastor, he had been deeply formed by working closely with lay parishioners.

“I could never have done what I did if not for them,” said Archbishop Pérez.

Parishes are currently “in flux,” he said, and have changed radically over the past 60 years.

In previous decades, and especially in Philadelphia, parishes stressed registration and membership, without which faithful seemed to lack “rights,” said the archbishop.

As a Philadelphia priest, he was once asked by a family to celebrate a funeral Mass for their tragically deceased daughter — a liturgy the pastor hesitated to permit, since the family had not registered at the parish.

“And I said, ‘Well, Father, I thought the person just needed to be dead,’” said Archbishop Pérez.

In contrast, he said, “for most of the world, membership in the church is through a sacrament, not through some bureaucratic, administrative task.”

But with increased mobility, “the concept of the parish territory is changing,” along with “the notion of church,” he said.

The archbishop stressed that “the parish has to be the center of missionary activity” and “to be (a community) turned outward.”

That effort requires a real partnership between both clergy and laity, he said, since “we are back to where the early church was.”

“We have to become missionary in our hearts, and we have to reintroduce the world around us to Jesus Christ,” said Archbishop Pérez.

NEXT: Parishes are hurting during COVID fallout, but help is here