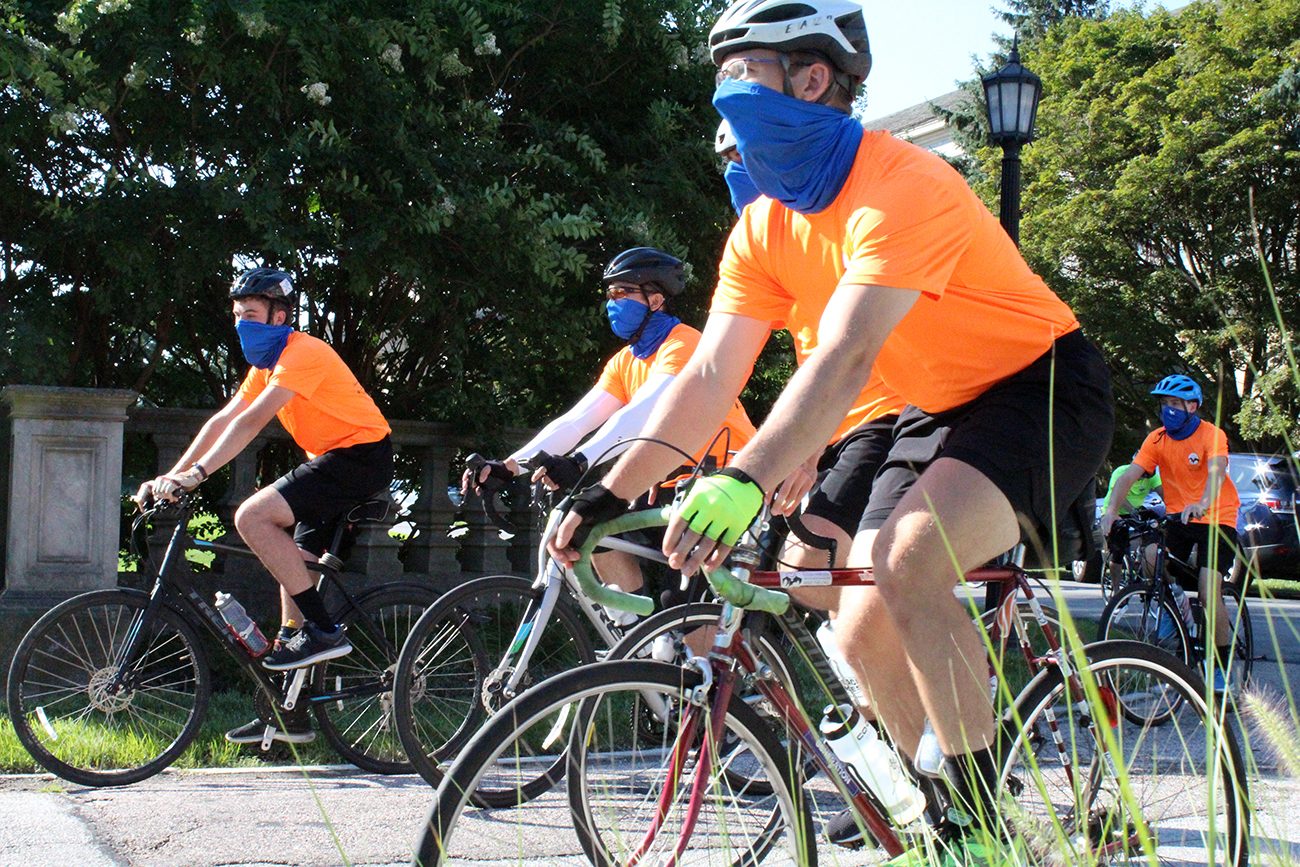 The seminarian cyclists head out on the roads from St. Charles Borromeo Seminary on the first day of the five-day Biking for Vocations event to raise awareness of religious vocations. (Matthew Gambino)

Ten seminarians plus a few bishops, priests and a pastoral leader are putting their feet up after cycling some 2,000 combined miles throughout the Philadelphia Archdiocese to promote vocations to priesthood and religious life.

Now in its second year, the five-day “Biking for Vocations” pilgrimage left St. Charles Borromeo Seminary in Wynnewood Aug. 5 after a blessing by seminary rector and Auxiliary Bishop Timothy Senior. Prior to their departure he described the riders as “a reminder of the presence of the Holy Spirit moving in the church.”

Over the next five days, the seminarians pedaled and prayed their way along one of two routes: a 150-mile trek though Philadelphia and its northeastern suburbs, and a 210-mile journey that traced the perimeter of the five-county archdiocesan area.

(See a photo gallery of the event from beginning to end in our Photo Features section.)

The teams stopped at a total of 17 parishes as well as Father Judge High School, enjoying fellowship and hospitality, sharing vocation stories, and at points celebrating Mass and holy hours.

Father Christopher Cooke, director of the seminary’s Spiritual Year program and a veteran of last year’s inaugural ride, cycled with three of the seminarians for the duration of the perimeter route.

The riders on the city route were accompanied for several miles by a few other special guests, including Philadelphia Auxiliary Bishop John McIntyre, Bishop Joseph Coffey of the Archdiocese for the Military Services and a Philadelphia-area native, and Meghan Cokeley, director of the archdiocesan Office for the New Evangelization.

“I only rode one day, because I didn’t want to die,” joked Bishop Coffey, who led a holy hour Aug. 7 at Nativity of Our Lord Parish in Warminster. “I hadn’t biked in a couple of years, but I kept up with these young whippersnappers.”

During the holy hour, which drew some 60 parishioners, Bishop Coffey shared his own path to the priesthood, and described archdiocesan vocation director Father Stephen DeLacy as “the hardest working and most effective” of his kind in the country. 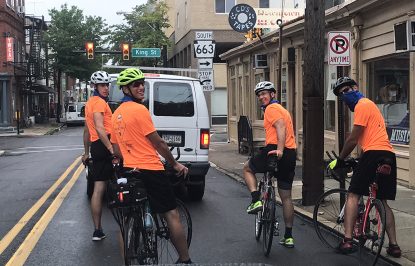 No, they’re not lost, just traversing the streets of Pottstown en route to St. Aloysius Parish.

The pilgrimage itself was “an awareness raiser at a few levels,” said Father DeLacy.

“First, it shows that the church is alive, vital and still on this missionary journey to get the Gospel message out,” he said. “And the second message is that God is calling everyone in the church to some mission, and he still calls young men to the priesthood, and men and women to religious life.”

The various stops also served as a kind of pastoral boot camp, preparing the seminarians for the often exhausting work of parish ministry.

“These guys are still novices in the sense of ministry, but they’re pushing their emotions, their spiritual life, their interiority to share the Gospel,” said Father DeLacy. “They’re stepping into the public eye for five days. They’re going to come back more capable of ministry than when they left.”

The trek focused on “witness and encounter,” said Susan Matour, pilgrimage organizer and associate director of the archdiocesan Vocation Office for the Diocesan Priesthood.

In fact, a desire to draw closer to the archdiocesan parishes was the original inspiration for the project.

In 2019, seminarian Tucker Brown confided to classmate Christopher Massaro that he wanted to better acquaint himself with the archdiocesan area by cycling throughout it. Massaro agreed, and suggested asking Father DeLacy to develop the effort into a vocations awareness event.

“It provides encouragement not only for the people we encounter, but also for us,” said Brown. “That was definitely something I experienced in the parishes, encountering the faith of so many people.”

At the start of the pilgrimage, Brown credited a number of others for prompting his discernment of the call to priesthood.

While Brown was in college and uncertain about his own beliefs, his father began attending daily Mass, and the impact was a noticeable one.

“When I came home the summer after my sophomore year at Penn State, my dad was transformed,” said Brown. “Instead of ‘Seinfeld’ and ‘Family Guy’ on television, it was now Mother Angelica and EWTN. That summer I was gifted with faith and greater understanding, and I felt at home in the church again.” 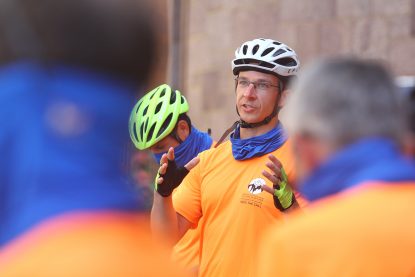 Seminarian Tucker Brown, who along with Chris Massaro organized the first Biking for Vocations event last year, makes a point during his talk at the cathedral. (Sarah Webb)

As a medical student a few years later, Brown was struck by the devotion and courage of a terminally ill patient.

“Nothing could be done to save her, and yet she was filled with joy,” he recalled. “She was both happy to be alive, and ready to die. I realized that the reason for that was her faith.”

Vocations are nurtured not in isolation but community, said seminarian Eric Tamney.

Now in his pastoral year, Tamney joined fellow riders for a question-and-answer session after the Aug. 7 holy hour at Nativity of Our Lord, during which he named 40 Hours eucharistic devotion as one of his favorite aspects of seminary life.

“It’s a super-awesome time of fraternity and prayer,” said Tamney.

Seminarian Augustus DeSimone added that preparedness was essential to both the pilgrimage and to any ministry.

“You always have to be ready when a need arises,” he said. “You never know whose hands are needed on deck.” 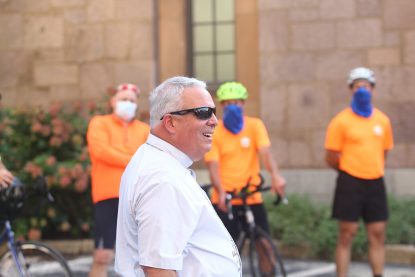 In DeSimone’s case, one necessary pair of hands belonged to an archdiocesan-area Knight of Columbus, who supplied the seminarian with a bike after a frustrating and fruitless online search.

On the pilgrimage’s website, DeSimone recounted that God “had a bike planned all along, despite my doubts, fears and anxieties.”

In the same way, he continued, “we ourselves so often struggle and doubt about what God’s will is for our lives … but in the end, if we persevere in our search, we will find something that far surpasses our expectations.”

Noting that neither the COVID-19 pandemic nor Tropical Storm Isaias had deterred the seminarians from “Biking for Vocations,” Bishop Senior said that the pilgrimage was “really reflective of endurance.”

As the two teams of riders concluded their journey Aug. 9 at the Cathedral Basilica of SS. Peter and Paul, Archbishop Nelson Pérez reflected that the miles covered symbolized the call of priesthood.

“In many ways, the priesthood is a ride,” said Archbishop Pérez, who along with a group of young adults welcomed the seminarians with a chorus of cowbells. “It’s an adventure with God.” 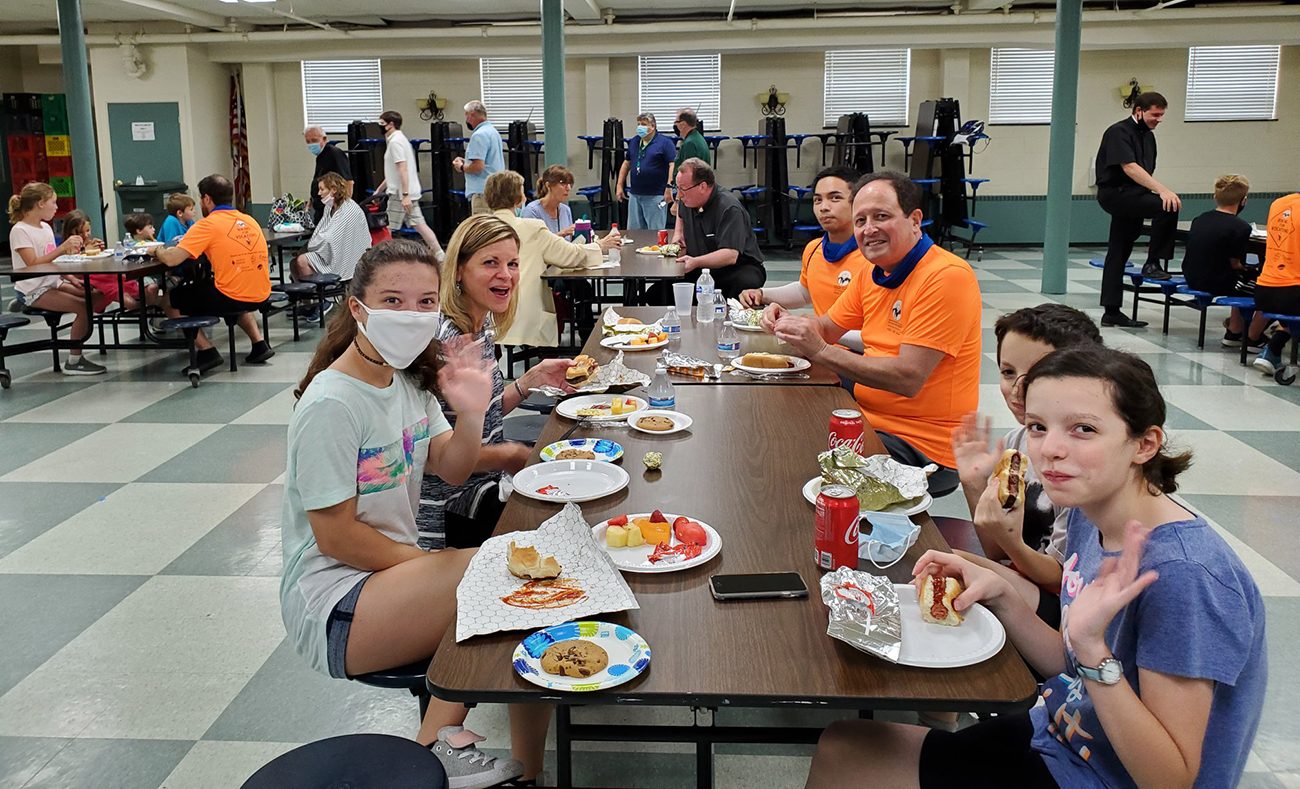 NEXT: Rosary rally on Aug. 15 calls for ‘radical transformation’ of nation