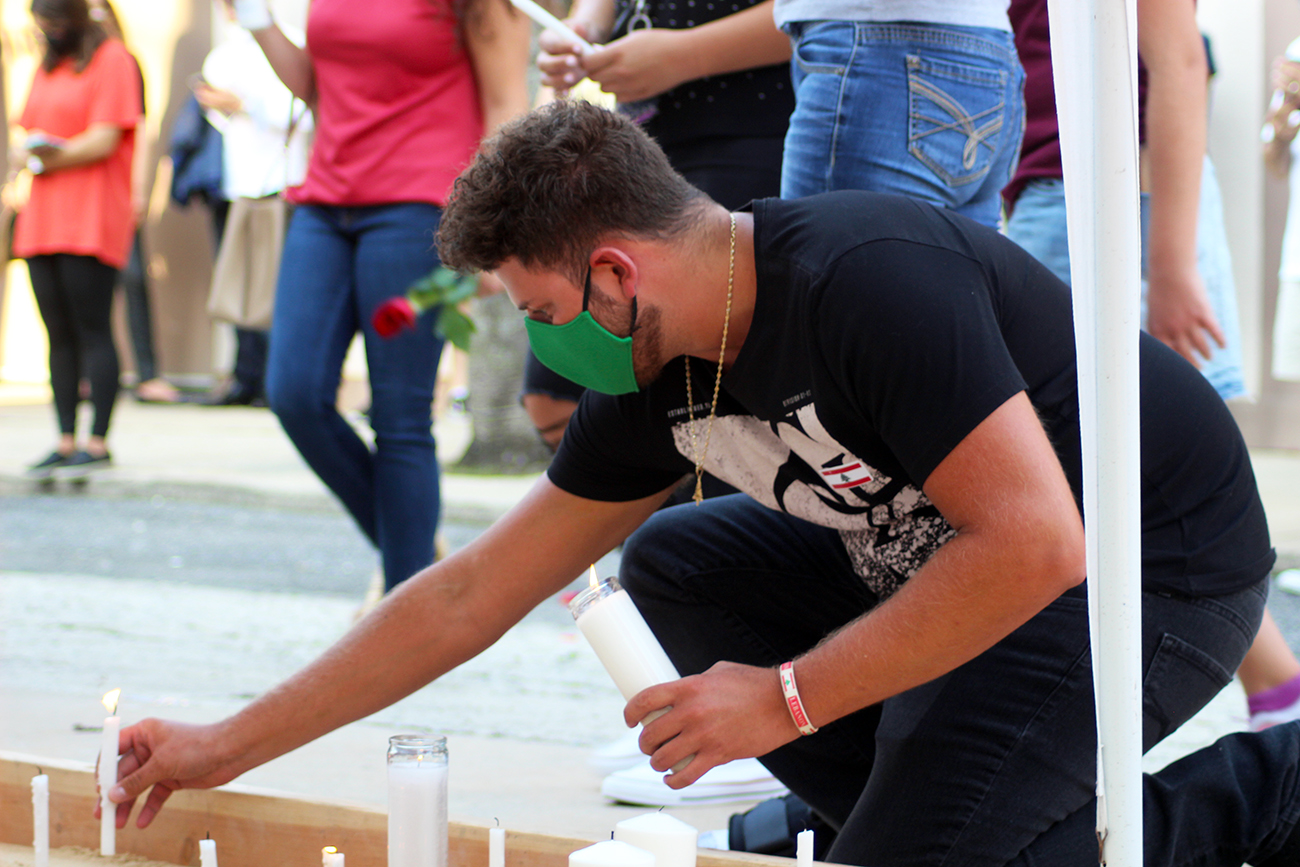 A man lights a candle outside of St. Maron Maronite Catholic Church in South Philadelphia. The parish held an Aug. 10 outdoor memorial for victims of an Aug. 4 explosion in Beirut, Lebanon, that killed some 170 and wounded at least 6,000. (Photo by Gina Christian)

Local Lebanese Catholics are raising funds to assist those struggling with hunger and homelessness after a devastating Aug. 4 blast in Beirut.

The massive explosion, which killed more than 170 people and wounded at least 6,000, is believed to have been caused by ammonium nitrate improperly stored at that city’s port.

(View a photo gallery of St. Maron’s Aug. 10 memorial service for victims of the blast.)

Parishioners at St. Maron Maronite Church in South Philadelphia are seeking to raise $2,000 by Sunday, Aug. 23 to support the nonprofit Matbakh Al Bouna.

Founded by priests of the Maronite Eparchy in Antelias, Lebanon, the organization has been working to feed impoverished families in Beirut’s suburbs. Since the explosion, the number of clients has exceeded 1,000 per day.

“We realize that these may be financially challenging times for many of our parishioners,” said Father Samir Chebli, pastor of St. Maron’s. “However, many of our brothers and sisters in Lebanon are homeless and without food. When we all work together as one, we can reach our goal.”

Father Chebli said the parish will match the amount raised up to $2,000, for a total amount that “will cover the supplies necessary for just one month.” 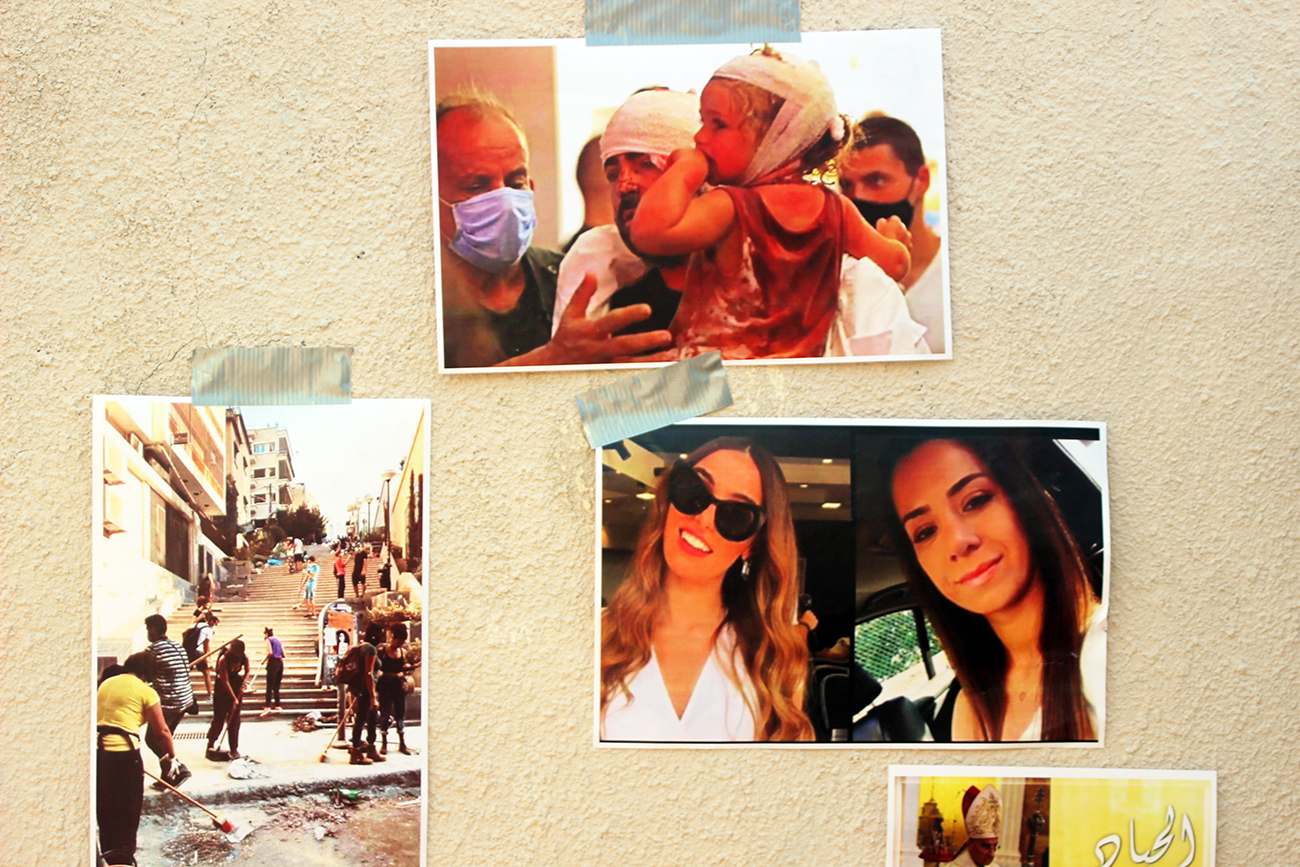 Some 300,000 have been left without shelter in the wake of the blast, and sorrow has increasingly merged with outrage, with many Lebanese saying the explosion directly resulted from longstanding government corruption and neglect.

The 2,750 tons of ammonium nitrate, a widely used fertilizer and mining explosive, had been offloaded from a cargo ship impounded in 2013. Beirut port and customs officials claimed they had asked authorities multiple times to export or sell the material, but without success.

The tragedy highlights Lebanon’s political and economic dysfunction, which even before the COVID-19 pandemic had led to double-digit unemployment, widespread poverty and lack of access to safe drinking water, electricity and health care.

A week after the explosion, some 60 St. Maron parishioners gathered for an open-air memorial service outside of the church, the exterior walls of which displayed photographs of the victims and the blast’s wreckage.

At the ceremony, entitled “Day of the Phoenix,” names of the deceased were posted behind a small outdoor altar with a crucifix, with participants placing flowers and candles as they prayed and listened to Scripture passages.

“We need everybody in the U.S. to know about our disaster,” said Father Chebli. “It was so big that we need to share it with everybody, because we need help from everybody.”

Likening the nation’s politicians to “terrorists,” he said that the Lebanese people had been “kidnapped in (their) own country” due to the criminality and corruption of the ruling elite.

Fellow Maronite priest Father David Fisher said in his reflection that “the peoples of Lebanon have often been a bridge between continents.”

Several popes – among them, Pope Paul VI, Pope John Paul II and Pope Francis — have pointed to Lebanon as a model for cultural and religious exchange. In a 1989 apostolic letter, Pope John Paul II described the country as “a message of freedom and an example of pluralism for both East and West.”

Christel Khattar, a young adult parishioner of St. Maron, said area Lebanese are “really hurting for their families and loved ones back home, and for the Lebanon they knew from way back.”

Although her loved ones survived the explosion without injury, Khattar added that it was important “to feel the same sentiment as those who are suffering.”

While “people feel bad about” the tragedy, she said, “it’s not the same as when you’re with someone” in solidarity.

With sustained international assistance, particularly from the United Nations and the U.S., “our country will rise again,” said Father Chebli.

NEXT: Videos lay out details of Catholic school reopening plans