Bucks County man among two to profess vows as Salesians 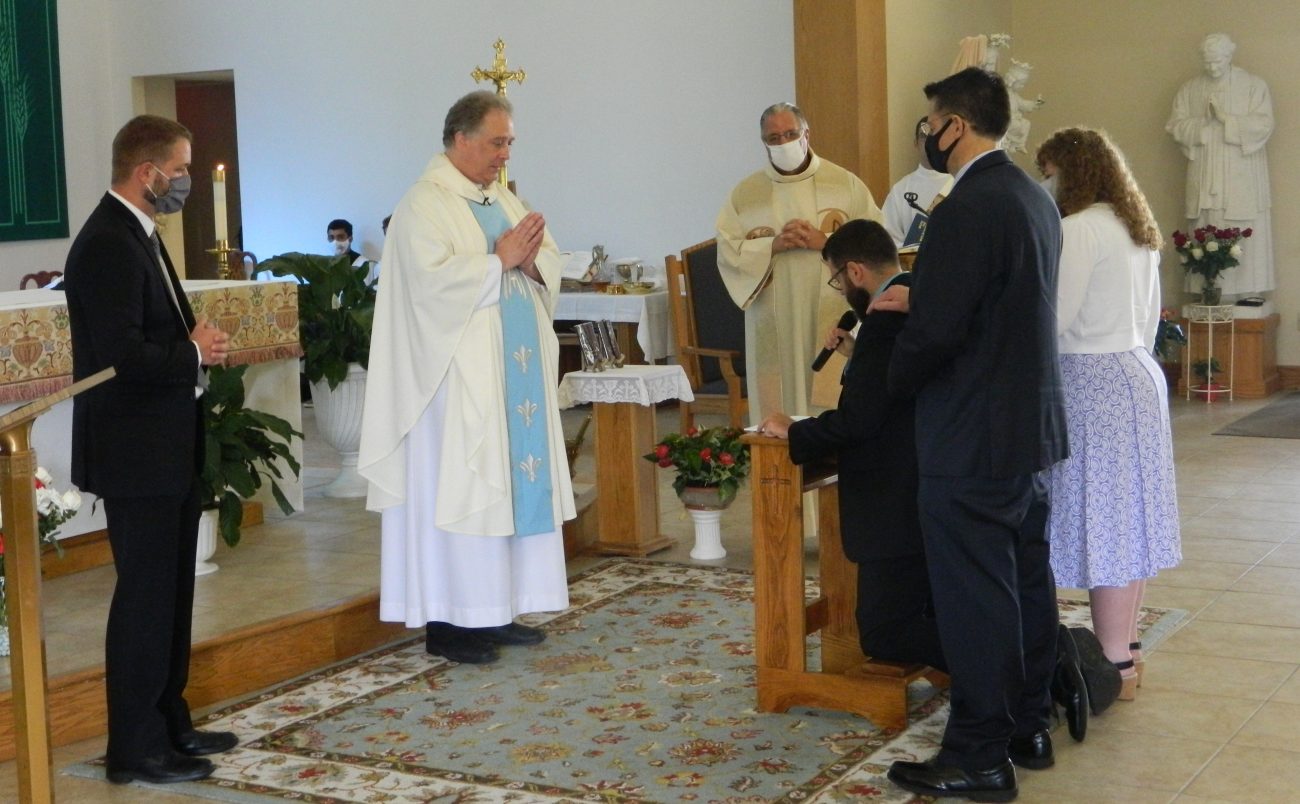 Brother John Patrick Castonguay, S.D.B. (kneeling), makes his first profession of vows in the order of the Salesians of Don Bosco before Salesian Father Timothy Zak, provincial, Aug. 15 in the Marian Shrine in Haverstraw, N.Y.

Brother John Patrick Castonguay, S.D.B., a resident of Richboro, Bucks County and a member of St. Bede Parish in Holland along with his parents John and Theresa Castonguay, made his first profession of vows as a Salesian of Don Bosco on Aug. 15 at the Marian Shrine in Haverstraw, N.Y.

He and Brother Kevin Robert White, S.D.B., professed as clerical members of the society, intending to pursue priestly studies.

More than 200 people took part in the Mass, including 22 Salesian concelebrants, 14 other Salesians, family members of Brother John and Brother Kevin, students and alumni from Don Bosco Prep in Ramsey, N.J., and other friends and members of the Salesian family.

Brothers John and Kevin completed a year of novitiate in the Salesian community of Richmond, Calif., guided by master of novices Father Joseph Nguyen, S.D.B., of the San Francisco Province. Prior to that, they made a year of prenovitiate at Don Bosco Prep under the direction of Brother Thomas Dion, S.D.B. 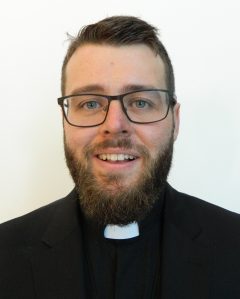 Several current and former students from Don Bosco voiced their happiness after the profession Mass.

“It was truly inspiring to watch Brothers John and Kevin make their first professions,” said sophomore Gian Luca. “It’s nice to see them get inducted into the community that we all live around and model after, which brings them one step closer to Don Bosco.”

Christian Rendo, Class of 2020, said, “In the time I’ve known both the brothers, I feel I learned so much from them. They helped me advance my faith and stay closer to God. Both provide fun humor, and I’m really happy for them. Today was an awesome day!”

Sebastian Fox, a 2019 graduate of Don Bosco, served as cantor at the Mass.

“I’ve been singing with Brother John for a while,” he said. “We started at Don Bosco, and now we’re here. The growth and the maturity in him is really astonishing, and it’s a blessing that I’ve seen it as a student and now an adult.”

Brother John, 27, grew up in Pennington, N.J. He has two younger sisters and a younger brother.

He started to discern religious life while he was attending Fordham University and growing in his prayer life and a desire to give his life to God’s service.

Because of his experience working with young people, a friend suggested he consider the Salesians. The vocation office put him in touch with Salesian Father John Serio for spiritual direction, which he continued during graduate studies at Providence College, earning an M.Ed. in secondary education.

John said he found in Father Serio “a true model of Salesian accompaniment.”

During his candidacy year (2017-2018) at Don Bosco Prep, and then his prenovitiate (2018-2019), he found in the local Salesian community “incredible models of joyful fraternity (and) self-sacrificing love for the young people at Ramsey.”

He was naturally attracted to Salesian spirituality’s “two pillars of the Blessed Sacrament and Mary Help of Christians.”

Brother John will join the Salesian formation community in Orange, N.J., and will take pre-theology and Spanish courses at Seton Hall University; he’d also like to continue his musical education.

He hopes “to continue to grow as a man of prayer, allowing my relationship with God to illuminate every aspect of my life” and to continue to serve God, his brothers and the young.

He expects to use his musical talent and love for teaching to build relationships with the young and introduce them “to God through beauty and joy.” 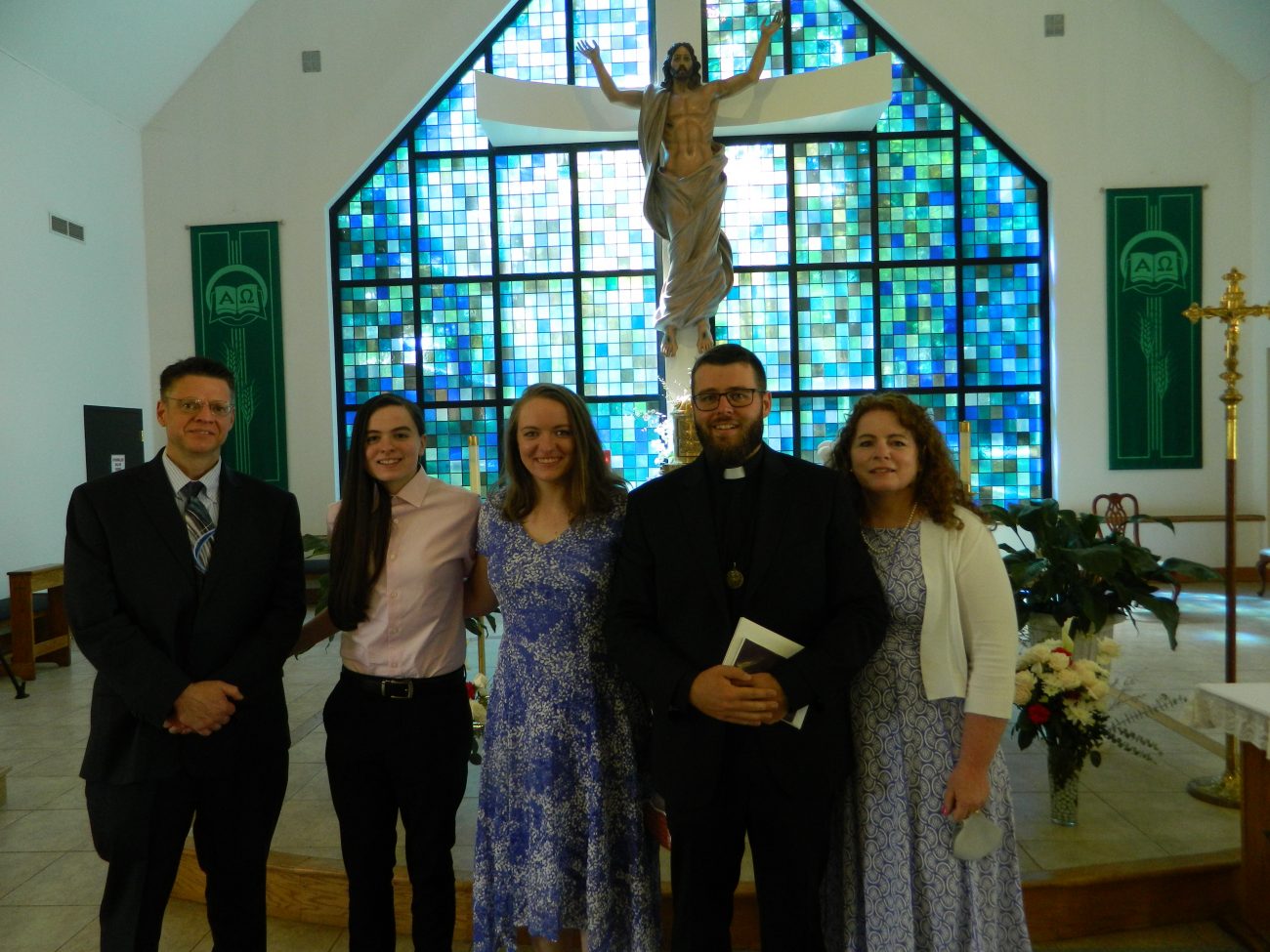 After the Mass of profession, the Castonguay family poses for a photo, including (from left) John, Megan, Kate, John and Theresa.

NEXT: Indian Catholics bid farewell to priest after annual Mass