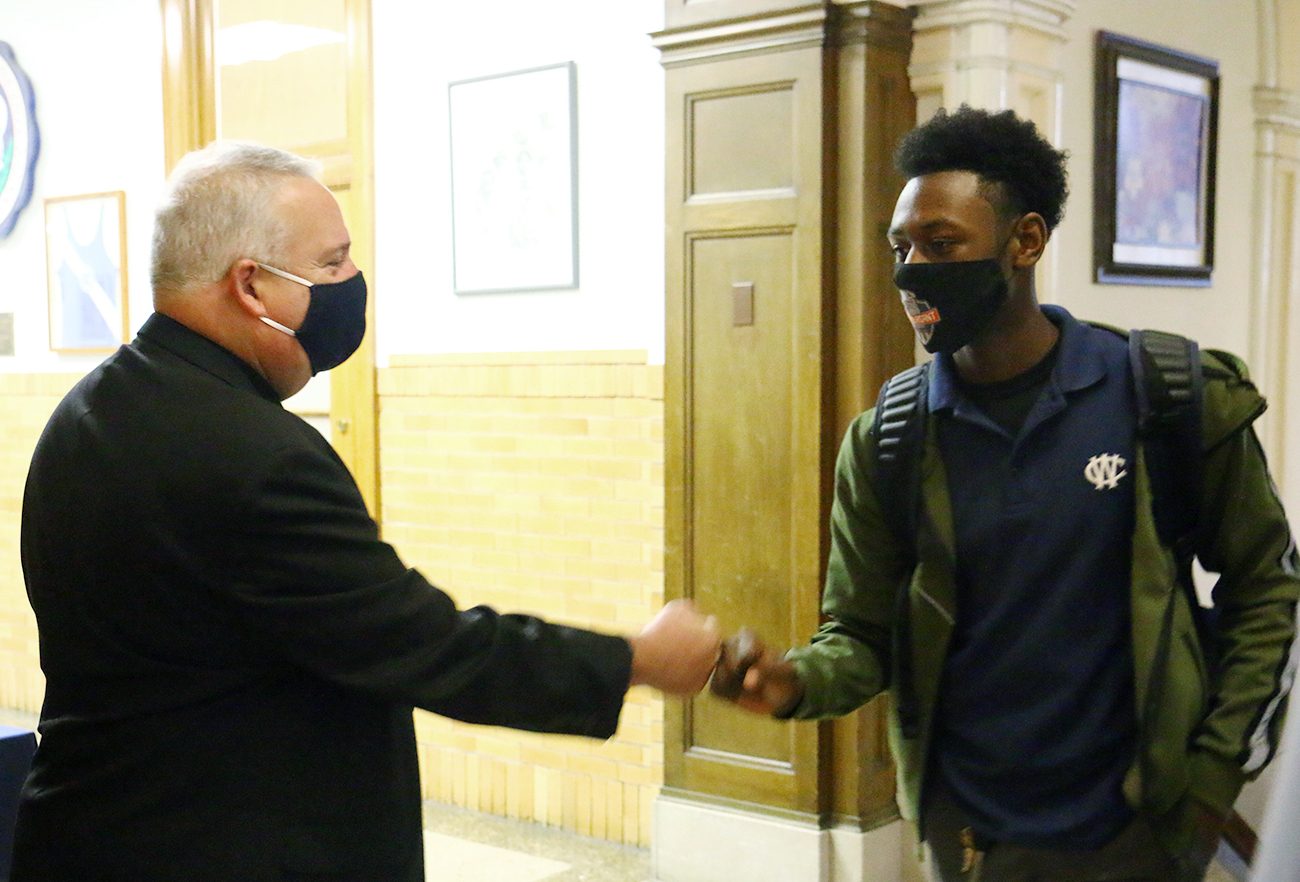 A student at West Catholic Preparatory High School is greeted by Archbishop Nelson Pérez, who was on hand Sept. 9 to offer a blessing and words of hope at the start of the new academic year, which will feature a hybrid learning model due to ongoing COVID-19 precautions. (Photo by Sarah Webb)

On Sept. 9, students were greeted on the West Philadelphia campus by the archbishop as they began the new academic year with a hybrid instructional model that combines in-person and online learning.

(See a photo gallery of the visit here.)

“I know that the last couple of months have certainly been incredibly difficult,” said Archbishop Pérez in his welcoming remarks, which were streamed live via Facebook. “This is one of those times in our lives that we’ll never forget.”

Strict social distancing, regular temperature checks and a 50% split between students learning on campus and remotely are the new norm at the 17 archdiocesan high schools throughout the five-county region. Specifics of the reopening plan, “Catholic High Schools Compass: Continuing Excellence in Catholic Education,” were communicated to families in July.

Archbishop Pérez said that at the outset of COVID-19, archdiocesan schools had moved rapidly to an online format, thanks to the dedicated efforts of teachers, staff and administrators — including secondary school superintendent and Immaculate Heart Sister Maureen Lawrence McDermott, who joined the archbishop in greeting West Catholic students.

The school’s interim president Andrew Brady and principal Genevieve Torres, both graduates of the Class of 2002, were also on hand.

The archbishop noted that a number of Pennsylvania school districts had consulted the archdiocese for advice on creating an effective transition to virtual instruction. As part of that undertaking, web cameras have been installed in both archdiocesan secondary and elementary schools, and the former have adopted the Schoology learning management system, which integrates with Zoom and other platforms already in use.

“I don’t know how they did it, but I know why they did it,” said Archbishop Pérez, observing that “teachers and administrators” developed new ways of instruction out of their “love and … passion” for Catholic education.

The archbishop described them as “examples of God’s care and love” for the students.

“(They) have been working really, really hard so that you could be where you’re sitting right now,” he said.

Brady agreed, noting that the school’s staff had labored “endlessly to make this (school year) a reality.”

In many ways, he said, launching the new academic year felt like “starting from scratch.”

“This is unprecedented, so we don’t have any other experience or models to look back on to guide us,” said Brady. “As we worked through our plan it felt like some items were going to be quick and easy decisions, and then as you peel back the layers, you realize even the easy decisions aren’t in fact easy.”

At the same time, he said, having a “message of love at the foundation” of Catholic education “keeps us focused on what matters most.”

The archbishop’s visit invited the school community to recover “the sense of joy and enthusiasm that togetherness brings,” said Brady.

In his blessing, Archbishop Pérez invoked the intercession of Mary and of St. John Neumann, “the patron of our schools,” and concluded his remarks by observing that “forming leaders for our church and society is the awesome responsibility … that we share.”

Despite the complex difficulties posed by the COVID-19 pandemic, said the archbishop, “we are a people of hope.”

“We will prevail over these challenges,” he said.

PREVIOUS: Ministry asks faithful to step up for addiction recovery

NEXT: Catholic schools team up with agency to fight hunger