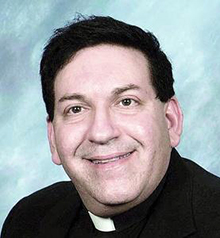 He also served on the faculty at St. John Neumann High School and Bishop McDevitt High School. Most recently, since 2018 he has served as administrator and pastor of St. Rose of Lima.

Father William Chiriaco has known Father Santorsola from their entry into St. Charles Seminary 40 years ago, and they have been friends ever since.

“We hit it off right away,” Father Chiriaco said. “He was very outgoing in a South Philly way, and it didn’t matter what kind of ministry he was in. I was at Bishop McDevitt when he was school minister and he got along splendidly with the students; they loved him. He always put the kids first.

“Later when he was a parochial vicar at St. Pius and I was at Cardinal O’Hara High School, he would come for confessions for the kids. He was young at heart and could adapt to any ministry.”

During Father Santorsola’s time at St. Rose of Lima Parish he made a lasting impression, according to parish secretary Jen Pokoy.

“He cared about his church, he was a people person. He cared about the people,” she said. “His personality was one in a million.”

A private burial was held for Father Santorsola at SS. Peter and Paul Cemetery, Springfield on Saturday, Sept. 5. Bishop Timothy Senior celebrated a memorial Mass for him at St. Rose of Lima Church on Thursday, Sept. 10. Father Chiriaco was the homilist.

In addition to his father, Father Santorsola is survived by his brothers, Michael and Armand Santorsola.