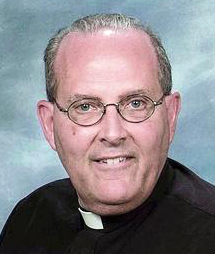 Born in Philadelphia the son of the late August and Dolores Matthews Orth, he attended St. Martin of Tours School and Cardinal Dougherty High School, both in Philadelphia, before entering St. Charles Borromeo Seminary.

Father Orth was ordained by Cardinal John Krol May 17, 1975 in the Cathedral Basilica of SS. Peter and Paul.

While Father Orth was assigned to school ministry and as a parish priest and pastor over these past 45 years, a significant role was his volunteer work among people who are homeless, unemployed, recovering from addictions or suffering from mental illness, especially those at Catholic Social Services’ Coffee Club in Chester these past eight years.

CSS named Father Orth its Volunteer of the Year in 2016 for his work at the Coffee Club, a drop-in service for the homeless and needy visiting CSS’ Chester City Family Service Center.

James Amato, Secretary for Catholic Human Services of the Archdiocese of Philadelphia, well remembers Father Orth “as a volunteer and an example to all of us.”

Amato also remembers Father Orth when he was a young seminarian coming to volunteer at St. Martin of Tours Parish in Philadelphia. “I was in a basketball league and he would come and referee. He kept us in line and gave us his time,” he said.

In addition to his interest in reading about the Civil War, visiting battlefields and watching documentaries, Father Orth was an avid Philadelphia sports fan and enjoyed any opportunity to attend Phillies games with his friends from the Coffee Club.

He also looked forward to his annual fall retreat at a Trappist monastery.

Father Thomas Dunleavy, who was ordained with Father Orth in 1975, remembers him as a good guy, very dedicated to his ministry, especially among the needy in Chester.

“I remember every Friday he would do a rap prayer with them and they enjoyed it. He would have them at his parish for Thanksgiving dinner and he would arrange for them to go to ball games,” Father Dunleavy said.

Beyond his work with at the Chester Family Service Center, Father Orth regularly visited inmates at a local prison and helped facilitate an annual Women in Transition Retreat for residents of CSS homeless shelters.

A Mass will be celebrated for St. Gabriel’s parishioners Thursday at 7 p.m. at the church in Norwood. A viewing will precede it from 4 to 6:45 p.m.

Archbishop Nelson J. Perez will be the main celebrant for Father Orth’s funeral Mass Friday morning, Sept. 11 at 11 a.m. at St. Gabriel Church. It will be preceded by a viewing from 9:30 to 10:30 a.m.

Among the concelebrating priests will be Father Michael F. Hennelly and Father John J. Large, who will be the homilist.

Both Masses may be viewed on live streaming video here: https://www.facebook.com/cavanaghfuneralcrematory/

Interment will be in Resurrection Cemetery, Bensalem.

Father Orth is predeceased by his parents and his sister, Lori Tarnowski. He is survived by his brother Bill, brother-in-law Raymond Tarnowski, two nephews Raymond and Anthony, and his niece Rosie.

PREVIOUS: Sister McNamee, ‘one of the giants in Catholic education,’ dies at 89

NEXT: Deacon Edward Hanley of St. Timothy Parish dies at 73