Ask Jesus to pray for you when you can’t, pope suggests 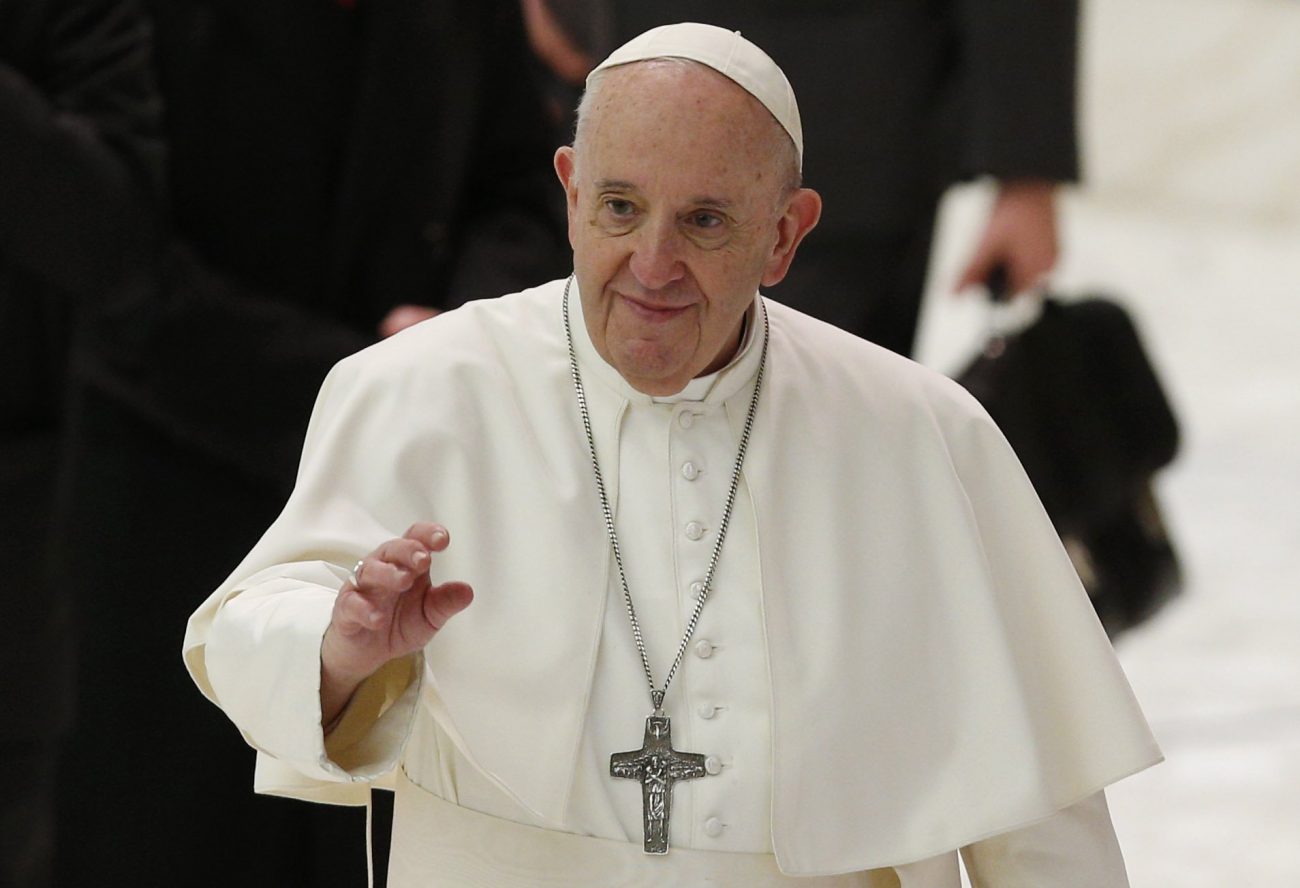 Pope Francis greets the crowd during his general audience in the Paul VI hall at the Vatican Oct. 28, 2020. (CNS photo/Paul Haring)

VATICAN CITY (CNS) — By asking to be baptized with other penitents in the Jordan River, Jesus placed himself among those who recognized themselves as sinners, Pope Francis said.

Despite the protests of John the Baptist, Jesus insisted on being baptized as “an act of obedience to the will of the Father, an act of solidarity with our human condition,” the pope said Oct. 28 during his weekly general audience.

“We must remember this: Jesus is the just one; he is not a sinner. But he wanted to descend to us sinners and he prays with us,” the pope said, departing from his prepared remarks.

Although Pope Francis made a point, again, of apologizing for having to keep his distance from visitors and pilgrims because of the COVID-19 pandemic, he did not wear a mask during the audience, not even when personally greeting visiting clerics.

Father Augusto Zampini, adjunct secretary of the Dicastery for Promoting Integral Human Development and member of the COVID-19 Vatican Commission, which makes recommendations to the pope and others, spoke with reporters Oct. 27 about the commission’s work.

When asked about the pope habitually not using a mask, Father Zampini said people have been trying to convince him to.

Continuing his series of audience talks on prayer, the pope reflected on Jesus’ choice to begin his public ministry with his baptism, which “had a clearly penitential nature.”

Jesus, he said, “does not stay on the opposite side of the river, saying, ‘I am the just one and you are the sinner,’ to mark his difference and distance from the disobedient people, but rather he immerses his feet in the same purifying waters.”

As Jesus came out of the water, the heavens opened and the voice of God proclaimed, “This is my beloved son.” Pope Francis said that Christians should remember that moment when they are feeling “sluggish and empty” during prayer, and they should “beg that Jesus’ prayer also becomes our own.”

When one says, “‘I cannot pray today. I don’t know what to do. I don’t feel like it. I am unworthy,’ at that moment, you must ask: ‘May your prayer, Jesus, be mine,'” the pope said.

“And trust that he prays for us. He, at that moment, is before the father praying for us,” the pope said. “He is the intercessor; he shows his father his wounds for us. Let us trust this. It is great.”

At the end of the audience, the pope condemned the murder of six schoolchildren killed when separatist insurgents attacked the Mother Francisca International Bilingual Academy in Kumba, Cameroon Oct. 24.

Government officials blamed Anglophone secessionists from northeast Cameroon who have been carrying out attacks since 2016 to gain independence.

“I am shocked by such a cruel and senseless act that has taken the lives of innocent little ones while they were attending classes in school,” the pope said.

Pope Francis prayed for an end to conflict and that “the safety of everyone and the right to education and a future for every young person is guaranteed.”

“May God enlighten hearts so that similar acts are never repeated and that the martyred northeast and southeast region of the country can finally find peace,” he said.

PREVIOUS: God has a heart for the poor, and we are his hands

NEXT: Calling all saints, including you