Crying out to God in prayer is only source of salvation, pope says 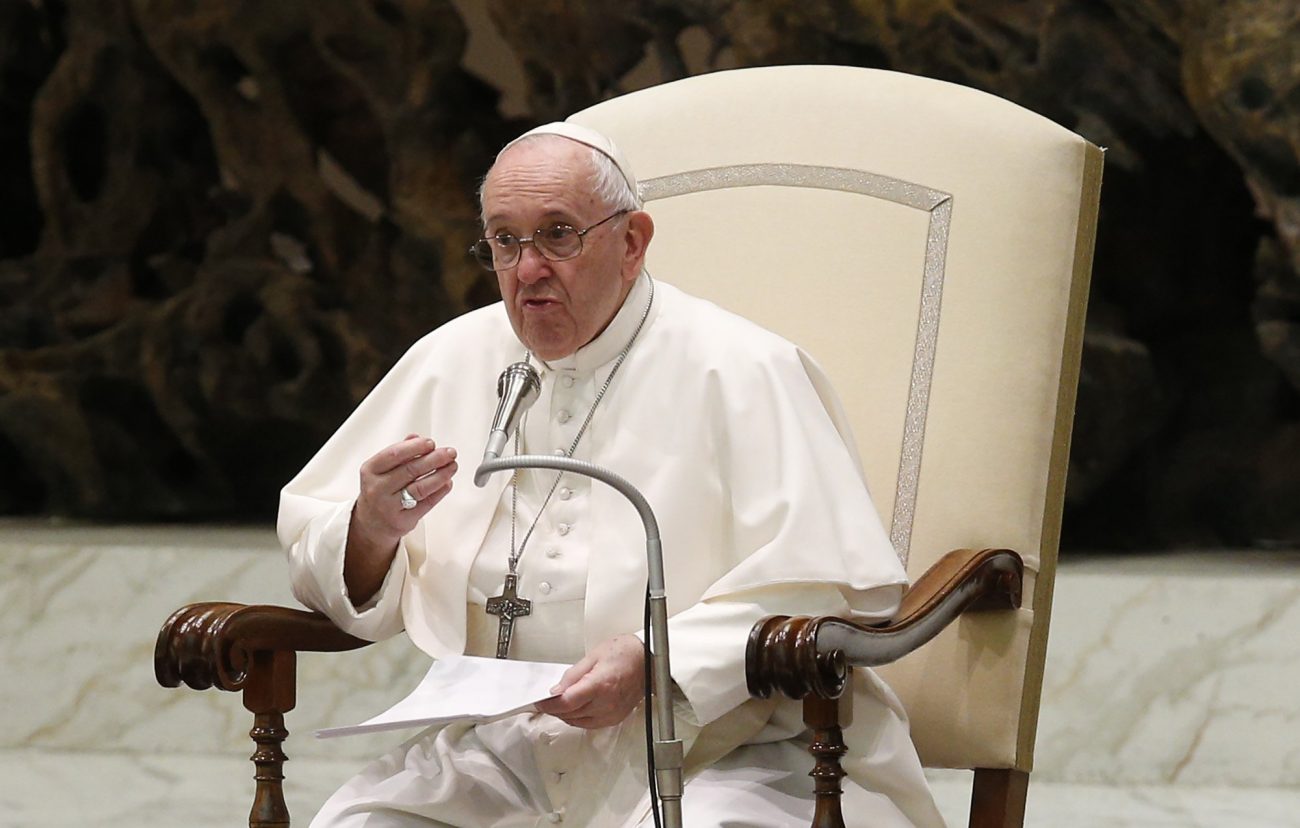 Pope Francis leads his general audience in Paul VI hall at the Vatican Oct. 14, 2020. A few days after four Swiss Guards tested positive for COVID-19, the pope broke from his normal pattern and did not personally greet people in the crowd. (CNS photo/Paul Haring)

VATICAN CITY (CNS) — The purpose of crying out to the Lord in prayer is not to get used to suffering, but to remember that God, and not humankind, is the only source of salvation and consolation, Pope Francis said.

The Book of Psalms, with its many prayers of supplication, teaches Christians how to ask “God to intervene where all human efforts are in vain. That is why prayer, in and of itself, is the way of salvation and the beginning of salvation,” the pope said Oct. 14 during his weekly general audience at the Paul VI audience hall.

“The prayer of the psalms is the testimony of this cry: a multiple cry because in life, pain takes a thousand forms and takes the name of sickness, hatred, war, persecution, distrust; until the supreme ‘scandal,’ that of death,” he said.

Prior to the pope’s arrival, participants were told that he would not be greeting them from up close and that they were to maintain proper distance from each other.

With a steady increase in COVID-19 infections prompting fears of a second wave of the pandemic, the Italian government issued a series of new decrees, including extending mandatory use of masks indoors, except in private homes, to requiring masks be worn outdoors, as well as the early closing of bars and restaurants.

Religious and civil ceremonies were also limited to no more than 30 guests. According to the Italian newspaper, La Repubblica, the Italian National Institute of Health reported that 77% of new infections occurred among family members.

Before concluding the audience, the pope apologized to those present and explained that with the new safety regulations in place, “it is better if we keep distant.”

“You are sitting prudently distant as it should be,” the pope said. “But it often happens that when I go down, everyone gets close and piles up. And it’s a problem because there is a risk of infection.”

“I’m sorry that I greet you from afar, but I think that if we, as good citizens, fulfill the regulations from the authorities, this will be a help to end this pandemic,” he said.

During the audience, the pope continued his series of talks on prayer, reflecting on the Book of Psalms, which “communicates ‘knowing how to pray’ through the experience of dialogue with God.”

“In this book, we do not encounter ethereal, abstract people, those who confuse prayer with an aesthetic or alienating experience,” he explained. “The psalms are not texts created on paper, but rather they are invocations, often dramatic, that spring from lived existence.”

The Book of Psalms, he continued, is where Christians can “hear the voice of men and women of prayer in flesh and blood, whose life, like that of us all, is fraught with problems, hardships and uncertainties.”

In the psalms, the pain, suffering and sorrow are not “meaningless, without purpose,” but instead it “becomes a relationship, a cry for help waiting to intercept a listening ear.”

“Even the pains we suffer cannot be merely specific cases of a universal law: they are always ‘my’ tears, which no one has ever shed before me. All human pains for God are sacred,” he said.

Departing from his prepared remarks, the pope said he met earlier with the parents of Father Roberto Malgesini, a priest from the Diocese of Como who was stabbed to death Sept. 15 by a mentally ill homeless man he was helping.

“The tears of those parents are ‘their’ tears and each one of them knows how much they suffered to see their son who gave his life in the service of the poor,” the pope said.

“When we want to console someone, we do not find the words. Why? Because we cannot get to ‘their’ pain, because ‘their’ pain is theirs, ‘their’ tears are theirs. The same, with us: the tears, ‘my’ pain is mine, the tears are ‘mine’ and with these tears, with this pain, I turn to the Lord,” he said.

Pope Francis said that while not all problems are solved in prayer, sometimes, it is enough for one to know that “the Lord listens.”

“Those who pray are not deluded,” the pope said. “They know that many questions of life down here remain unresolved, with no way out; suffering will accompany us and, after one battle, others will await us. But if we are listened to, everything becomes more bearable.”

PREVIOUS: God’s banquet is a feast for all

NEXT: Readings of the Holy Mass – 29th Sunday in Ordinary Time