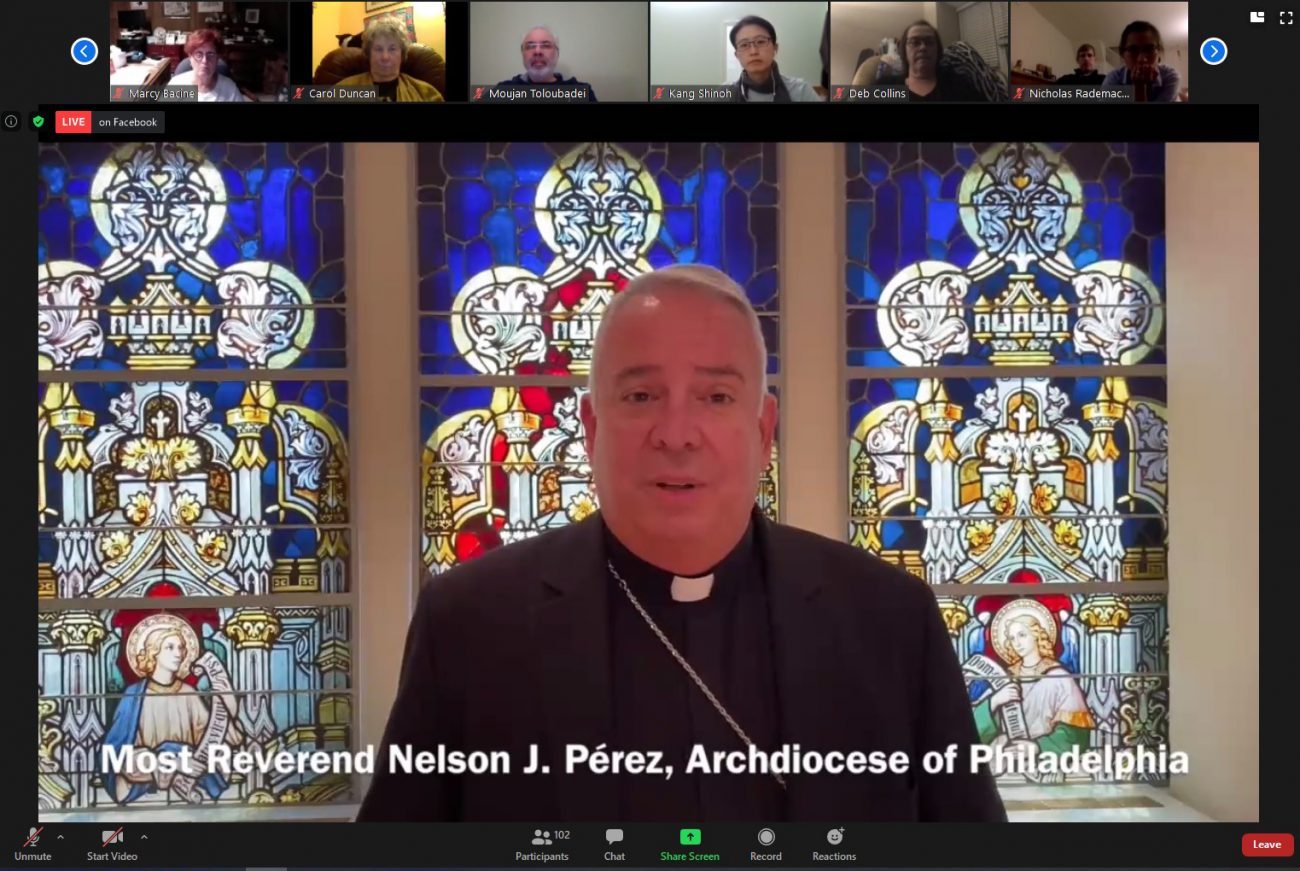 In a recorded video message aired during an Oct. 5 online interfaith service, Archbishop Nelson Pérez led intercessions for “those who have been victims of racism, whose hearts and lives have been hurt.” (Religious Leaders Council of Greater Philadelphia/Zoom)

Archbishop Nelson Pérez joined several area faith leaders in an Oct. 5 online gathering to pray for an end to racism.

Some 100 participants logged onto “Prayers for Our City from Our Traditions,” a virtual event organized by the Religious Leaders Council of Greater Philadelphia, of which Archbishop Pérez is a co-convener.

Founded in April 2006, the council – which is the first of its kind in the city – includes more than 30 member communities that represent some two million people of various faith traditions throughout the greater Philadelphia area.

In a previously recorded message, the archbishop offered prayers of intercession, petitioning for “an end to the evil of racism,” and for “forgiveness of our own personal moments and acts of racism” as well as “our institutional acts of racism.”

Archbishop Pérez also prayed for city and religious leaders, along with communities, neighborhoods and “those who works so tirelessly for justice and peace and harmony.”

In particular, he invoked blessings and healing for “those who have been victims of racism, whose hearts and lives have been hurt.”

Prior to the archbishop’s intercessions, Rev. Edward Livingston, director of the council’s religious community initiatives, opened the prayer service by inviting attendees to “be still and to pray together for peace, healing, strength and new beginnings.”

Imam Quaiser Abdullah of Masjid Quba then recited the Al-Fatihah, the first chapter of the Quran, which he described as “a call to mankind to reflect on our Creator and on our relationship to him.”

During her prayer, Evangelical Lutheran Bishop Patricia Davenport assured attendees that “God has shown us our actions make a difference,” and welcomed all to “join us on this journey to peace through prayer.”

In his pre-recorded segment, the Rt. Rev. Daniel Gutiérrez, Bishop of the Episcopal Diocese of Pennsylvania and a council co-convener, quoted a Scriptural passage from the prophet Micah, asking, “What does the Lord require of you but to do justice and to love kindness, and to walk humbly with your God?” (Mic 6:8) The same verse was also referenced by Rev. Livingston and other presenters.

A period of silence lasting eight minutes and 46 seconds was initiated by Christie Duncan-Tessmer, general secretary of the Philadelphia Yearly Meeting of the Religious Society of Friends. The segment corresponded with the length of time during which George Floyd, a 46-year-old African American, died while under Minnesota police restraint May 25.

In a June 1 statement denouncing the killing, the council said “that no mercy was afforded to Mr. Floyd in his dying moments is atrocious,” while calling for “ efforts that lead away from polarization and towards a unity of purpose that fosters a shared future.”

After additional prayers and a slideshow of images from some of the council’s 83 participating organizations, Rabbi Eric Yanoff of Temple Adath Israel in Merion Station recited Ahot Ketana (“Little Sister”). The text of the 13th-century prayer, which is sung by some communities at the beginning of the Jewish year, calls for the past year with its curses to come to an end.

“May this new year, this new time into which we venture forth, be a time of blessing – of togetherness and support for one another, across races and creeds throughout our community,” prayed Rabbi Yanoff.