Turn over the Miraculous Medal, see fire of divine love 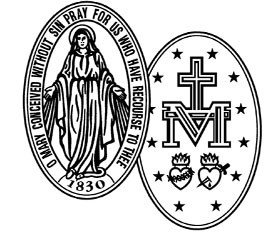 This year of 2020 has already distinguished itself as impoverished, compelling all to see the face of God in unimaginable ways during this pandemic. Many times it causes us to have feelings of powerlessness. Not new for the poor, these feelings are shared by all of us.

Yet this Nov. 27 is the 190th anniversary (1830) of the gift of the Miraculous Medal to the world. This gift, this medal, is a sign of “anti-powerlessness. All who wear it obtain divine graces and their power.

The power of the medal has long been known. Originally called the Medal of Our Lady of Grace, it became known to the people as the Miraculous Medal because of the many graces and favors obtained by those who wore it.

Almost 200 years ago, St. Vincent de Paul, patron saint of the poor, spoke about a medal too. He was the founder of the Daughters of Charity, the community of St. Catherine Laboure to whom Mary Immaculate gave the Miraculous Medal.

In a retreat conference, he was talking about serving the poor in the streets of Paris and said, “… they (the poor) scarcely have the expression or the mind of rational persons, so crude and vulgar they are. But turn the medal, and you will see by the light of faith that the Son of God, who willed to be poor, scarcely had a human face in his passion, and passed for a madman in the mind of the Gentiles.  … (Yet) he describes himself as the evangelizer of the poor: He sent me to bring good news to the poor!”

Little did St. Vincent know that his words would have even more meaning after one of his Daughters of Charity’s apparitions. What happens when, in Vincent’s words, we “turn the (miraculous) medal”? What do we see – the face of Jesus Christ?

The front of the medal already proclaims the omnipotent power of Mary who daily opens her arms to intimately embrace us. But turn the medal over and we see not only the face of Jesus Christ, but the whole power of all of salvation.

Surrounded by the 12 stars of the apostles, the perpetual gift of redemption is symbolized in the cross that rests on the “M,” the symbol of Mary and her motherhood. It is the union of the cross with the letter M that prods us to think of Mary’s role at Jesus’ crucifixion.

Her role, as in the Gospel of John, is related to us when Jesus says, “Woman, behold your son.” And his words to the beloved disciple, “Behold your mother.”

With these words, Christ created the new community of faith, the church. Christ’s creation was another conception of God to be born at Pentecost with the Apostles (the beloved) and Mary present.

Returning to the other side of the medal, beneath this cross on Mary are the Sacred Hearts of Jesus and Mary. These two hearts show us the never-ending divine love and care of Jesus Christ and Mary Immaculate for us. In the most profound way, by imprinting this on the medal, Mary wants us to know without doubt of the great love of her Son and her for us.

The celebration of the gift of the Miraculous Medal on Nov. 27 is not only a celebration of help given to us by Mary. It is so much more a call to evangelization.

The 12 stars of the apostles, the church and especially us who wear the medal claim the love of Christ and Mary. And importantly, they are symbolized not as human figures but as symbols of eternal love for us and others – two sacred hearts.

Real love is always in action. The symbols on the medal show this. Both hearts are on fire with love for us through their suffering and redemption. Thus the medal calls us to tell others of this divine love in action for each one of them, especially the lost, the abandoned and all who suffer the fake signs of gloom and evil.

On Nov. 27, celebrate your call to evangelize others to the love of God for you and them. Bring them the Good News of Jesus and Mary’s love for them in prayer. Just by turning the Miraculous Medal over.

NEXT: A prayer beyond all politics