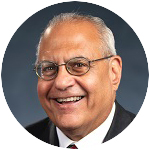 Our country’s soul is troubled. The COVID pandemic, civil unrest, economic inequality, climate change and national uncertainty have exposed the glaring shortcomings in the ideology of laissez faire — unfettered free market — libertarianism of the Reagan Revolution which has dominated public policy for the last 40 years.

Its stark and strident principles of “survival of the fittest,” “greed is good,” and “trickle down” economics are diametrically opposed to Christian love and charity.

Even amid this crisis our country has an opportunity to experience, as Abraham Lincoln said, “a new birth of freedom” by replacing this misguided and exhausted ideology and tackling these serious problems with the century-old tenets of Catholic social justice, which are grounded in uplifting and inspiring values found in the eternal truths of sacred scripture, the Beatitudes and moral considerations.

Indeed, Catholic social justice principles are not mysterious, not parochial, not intolerant but are as American as motherhood and apple pie.

They include widely accepted values: protection of all human life; fair play in economic and social life; dignity of every person and their rights as workers and consumers; strong families and participation in neighborhood communities; charity for the poor and disadvantaged; active role for government to promote the general welfare; and ultimately, stewardship of God’s creation so we can pass on a vibrant and sustainable planet Earth for future generations.

In 1891, faced with the rise of a brutish and inequitable industrialized world economy, Pope Leo XIII used a papal encyclical, which is the most authoritative teaching a pope can issue, entitled Rerum Novarum to introduce the world to the teachings of Catholic social justice.

He proclaimed that the Catholic Church must always use its teaching authority to speak out on social issues with a particular preference for the poor, disadvantaged and vulnerable.

Leo went on to recognize the rights of labor through trade unions and collective bargaining, and he rejected unrestricted capitalism and “Godless” communism-socialism, acknowledging that government is necessary for promoting justice through the protection of these rights.

Over the years Pope Leo XIII’s successors, including the ardent anti-communist pontiff from Poland, St. John Paul II, have developed and advanced these principles in a series of timely encyclicals that convincingly demonstrated how Catholic social teaching can be applied to the many economic and social problems faced by our country and the world at the time.

Coming on the heels of the 2008 financial crisis of the Great Recession, Pope Benedict XVI issued Caritas in Veritate, advocating for more, not less, governmental intervention in the economy as a way to rein in Wall Street and its high-risk financing and unbridled greed that directly caused the global financial meltdown.

In 2015 Pope Francis applied Catholic social justice principles to climate change. Decrying the exploitation and destruction of the environment in his encyclical Laudato ‘Si, Francis called for “all people of the world” to develop accessible sources of renewable energy, so “swift and unified global action” can address the serious consequences of the existential threat to the planet posed by climate change, global warming and the lack of clean water and biodiversity.

On Oct. 3 of this year Pope Francis used his comprehensive and well-received encyclical Fratelli Tutti to apply the tenets of Catholic social teaching to the long list of woes our country has been experiencing. He condemned racism as a sin against God and noted the death penalty and war were unacceptable.

Francis then warned against selfishness in the economy and the marketplace and denounced the “dogma” of neoliberalism economics that resorts to “magic theories of spillover and trickle-down economics to solve society’s problems, including the pandemic” and prayerfully urged the entire world to work together on the COVID-19 pandemic, international politics and the dignity of women.

These Catholic-American values can lead to commonsense policy initiatives: 1) an increase in minimum wage to the more livable rate of $15 per-hour; 2) support for union card check to permit workers to more easily organize unions and protect their workplace rights; 3) guarantees that health care won’t be taken away from folks in the midst of a pandemic and neither would they be penalized for pre-existing conditions; 4) end racism in voting, criminal justice, health care and the economy; and 5) enact sensible climate policy to protect the planet.

Undeniably, Catholic social justice can restore social, economic and racial justice which have been under attack before our eyes.

In fact, folks of all faiths, religions and political registrations can embrace these principles, including the president-elect, Senate majority leader and speaker of the House, by just resolving to leave our children and grandchildren a more fair and equitable country and vibrant and life-sustaining planet Earth.

Basil L. Merenda is the beneficiary of a Catholic education from kindergarten to eighth grade, high school, undergraduate and graduate school, and law school. He holds a master’s degree in economics from the University of Notre Dame and a law degree from Villanova University. He has spent almost his entire legal career practicing in the public service, law enforcement and union labor law.

NEXT: To everything a season: to weep, to social distance, to dance