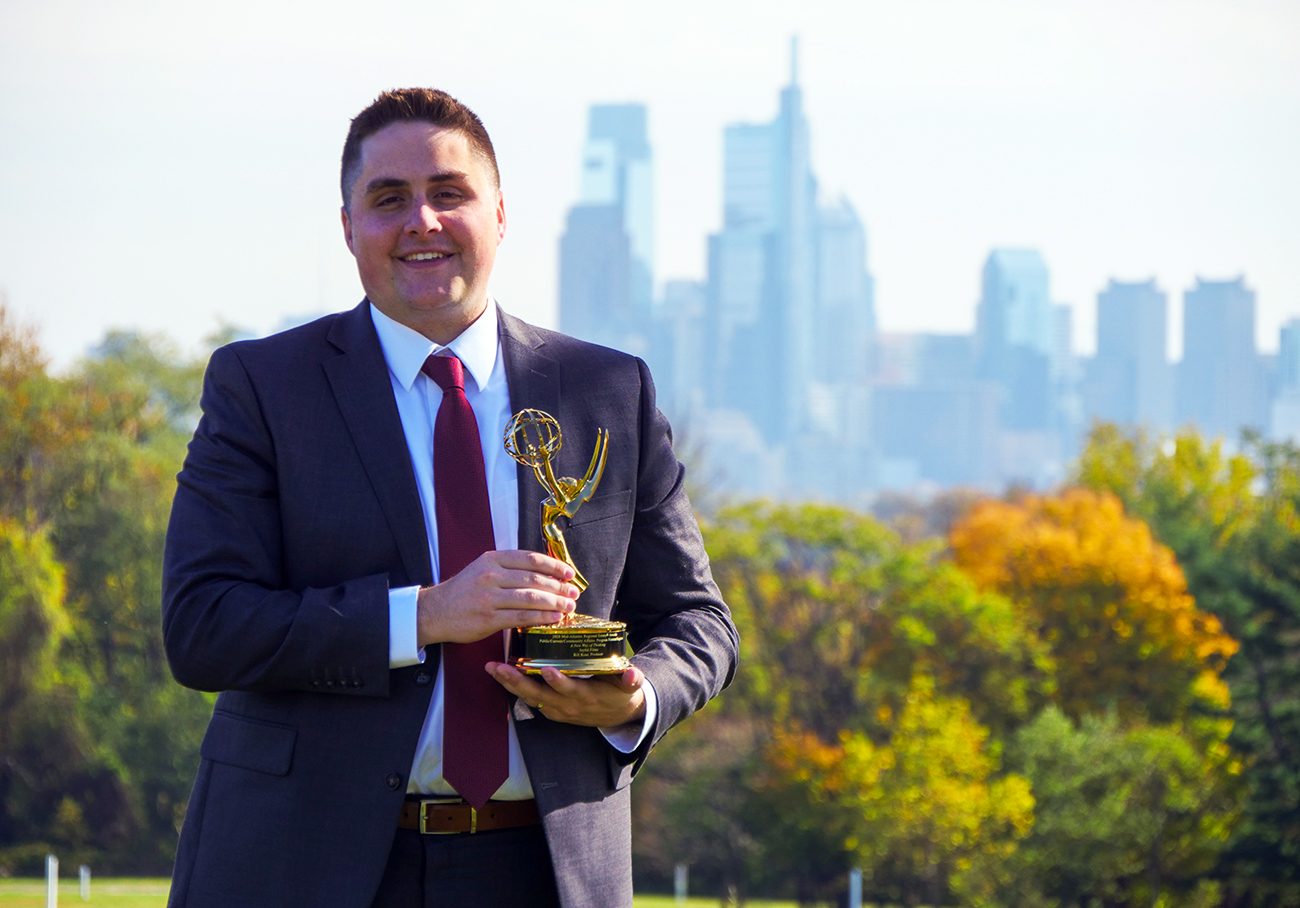 Filmmaker Bill Rose displays the 2020 Emmy award he and his team won for "A New Way of Thinking," a short film on the transformative work of a Vincentian recycling ministry that helped a formerly incarcerated man to transform his life. (Photo courtesy of Bill Rose/Joyful Films)

A local Catholic filmmaker has won an Emmy this year for showcasing the power of second chances.

Bill Rose, a young adult member of St. Eleanor Parish in Collegeville, headed up a team that produced “A New Way of Thinking,” which topped the current and community affairs category in the 2020 Mid-Atlantic Emmy Awards in September.

The five-minute video tells the story of Malik Brandy, who after incarceration was able to transform his life through the help of PAR Recycle Works, a ministry sponsored by the Vincentian Priests and Brothers of the Eastern Province in Philadelphia’s Germantown section.

“Malik called and was like, ‘Where’s my statue?’” Rose said. “He thought the award was all down to his performance.”

Brandy’s story is a compelling one, said Rose, and strong narratives are central to good filmmaking.

“Story drives the whole process, from start to finish,” he said.

In fact, he added, many Christian films overemphasize “the values and the message” at the expense of a solid tale that deeply engages viewers.

“Sometimes when you drive with the message, instead of letting the message organically come from the story, it can be a little hard to swallow,” said Rose. “Then it’s a case of, ‘OK, this person’s preaching.’”

Having produced numerous films for clients such as the Vincentians and the Philadelphia Archdiocese (including several pieces for the Office for Vocations to the Diocesan Priesthood), Rose knows how to capture visuals and voices that resonate, drawing from his own deeply held faith.

“Any film is really an opportunity to view the inside of the filmmaker, who takes in the world and then expresses it outwardly,” said Rose. “For me, it just comes out of my relationship with God, which I cherish so much.”

From an early age, Rose had a camera in hand, documenting family events with his parents’ camcorder while still in grade school.

“I was just trying to figure out as much as could, even before I could figure out how to download the media to my computer,” he recalled.

While at La Salle College High School, Rose began his formal studies in multimedia production, part of that school’s information sciences and technology curriculum. He even began creating promotional pieces for the school, with projects from other clients quickly following.

Rose then enrolled in Drexel University’s film and television program, gaining professional experience through his tenure at the Tierney Agency and producing work for McDonald’s, the Philadelphia 76ers, PECO and Independence Blue Cross, among others.

But faith-based projects inspire him the most, both artistically and personally, he said.

“Honestly, it comes down to the people I work with and their missions,” said Rose, who immerses himself in his clients’ ministries prior to hitting the record button.

A day spent filming the Little Sisters of the Poor left him “on fire,” he said.

“By the time I was done, I was like, ‘We need to serve the elderly!’” said Rose, referencing the religious order’s charism of caring for impoverished seniors.

As a 26-year-old, Rose encourages parishes and religious organizations to “give young people a chance,” especially since digital natives are already well versed in sharing their stories through social media.

Rose himself is looking to the next generation of filmmakers: he and his wife Kathryn have a 2-year-old son who is frequently before the camera lens of his proud father.

NEXT: Archdiocese to lease ground for two towers near cathedral