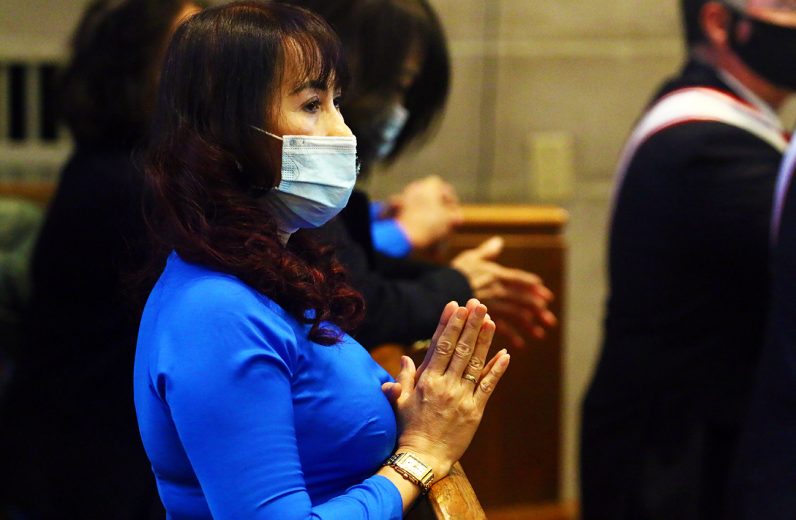 A woman kneels in prayer during a Nov. 15 Mass in honor of Vietnamese martyrs celebrated by Archbishop Christophe Pierre and Archbishop Nelson Pérez at St. Helena Parish in Philadelphia, home to one of several Vietnamese Catholic communities in the Archdiocese of Philadelphia. During the liturgy, both archbishops highlighted the profound spirituality and rich culture among Vietnamese Catholics. (Photo by Sarah Webb)

Vietnamese American Catholics are “spiritual interpreters” who have been tasked with “multiplying God’s love in the world,” said the Vatican’s ambassador to the U.S.

“This is the legacy of the Vietnamese church,” said Archbishop Christophe Pierre. “To be bold, and to be faithful.”

Archbishop Pierre shared his insights during a Nov. 15 Mass he celebrated at St. Helena Parish in Philadelphia, home to one of several vibrant Vietnamese Catholic communities in the five-county archdiocesan area.

In his opening remarks, St. Helena pastor Msgr. Joseph Trinh said it was a “special blessing” to join with Archbishop Pierre and with concelebrant Archbishop Nelson Pérez.

“Welcome back to the neighborhood,” said Msgr. Trinh to Archbishop Pérez. ”I’ve been waiting a long time to say that to you.”

Attended by some 300, the bilingual liturgy anticipated the Nov. 24 memorial of St. Andrew Dung-Lac, one of 117 Vietnamese Catholics martyred between 1820 and 1862. In addition to those commemorated on the feast, hundreds of thousands of Catholics were killed or persecuted in Vietnam from the 17th to the 19th century. 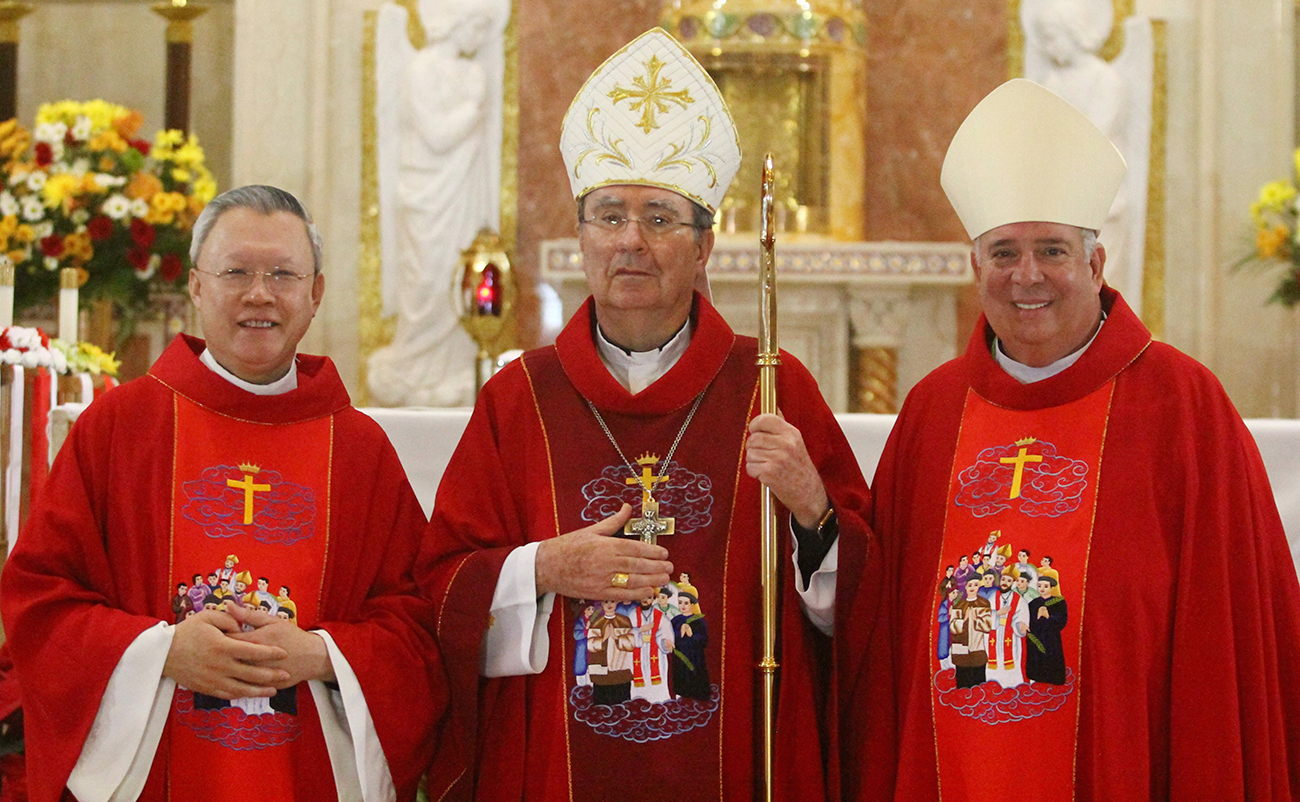 Catholics in the Southeast Asian nation continued to suffer throughout the politically turbulent 20th century, with Saigon Archbishop Francis Xavier Nguyen Van Thuan imprisoned by government authorities from 1975 until 1988. After the 1975 fall of Saigon, the U.S. sponsored the evacuation of 125,000 Vietnamese refugees; thousands more fled in the following years.

As of 2019, there were an estimated 2,604 faithful identified as Vietnamese among 10 parishes in the Philadelphia Archdiocese. Last year, an average of 1,864 attended weekly Mass celebrated in Vietnamese at seven parishes: St. Helena, Holy Innocents, Divine Mercy, St. Thomas and Visitation B.V.M. in Philadelphia; St. Ann in Phoenixville; and the St. Alice worship site of St. Laurence Parish in Upper Darby.

In his post-Communion remarks, Archbishop Pérez commended the “profound, profound spirituality” of the archdiocese’s Vietnamese Catholics.

“If there is one thing that is very characteristic of the Vietnamese community here in the archdiocese … and across the country, (it) is your incredible fidelity to your Catholic faith,” he said. 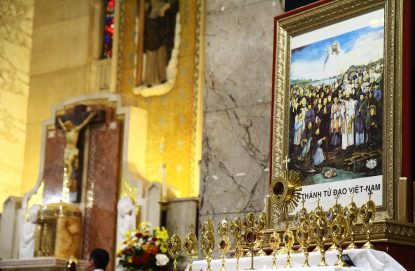 A shrine at St. Helena Church in Philadelphia commemorates the Vietnamese martyrs, whose Catholic faith is celebrated on Nov. 24, feast of St. Andrew Dung-Lac. (Photo by Sarah Webb)

As waves of persecution against the faith emerged, Catholics sought refuge in the forests of Lavang, where they reported seeing a vision of the Virgin Mary. Devotion to Our Lady of Lavang remains a key characteristic of Vietnamese Catholic spirituality.

St. Andrew Dung-Lac — a childhood convert and later priest who was tortured and beheaded in 1839 — exemplifies the “precious legacy of the suffering church” to which faithful in Vietnam have witnessed at the cost of their lives, said Archbishop Pierre.

This heritage, and the culture that nurtured it, are gifts to be sustained through coming generations, said Archbishop Pérez.

“You also are witnesses,” he said, urging the young people in attendance to “never allow anyone to take away your culture, your language, your faith. … Teach it to your children.”

St. Helena parishioner Tracy Tran said upholding her Vietnamese heritage is “a powerful statement, especially during a time when this country is so divided.”

Tran, a member of the Vietnamese orchestra and choir that accompanied the Nov. 15 Mass, admitted that “it’s hard to hold onto something that’s both spiritual and cultural when you’re trying to adapt to a new culture.”

She continues to speak Vietnamese with her parents, and said that “having celebrations like this one helps bring it all together.”

“We are always close to each other, so that we can pray together,” he said. “Our faith is very, very strong regardless where we live.”

“They show their love, their faith, and they’re willing to do anything and everything for our parish,” said Velez, noting the extensive investments made by St. Helena’s Vietnamese community in state-of-the-art technology for livestreamed liturgies.

“They’re very dedicated,” he said. “They’re the ones that move this church.” 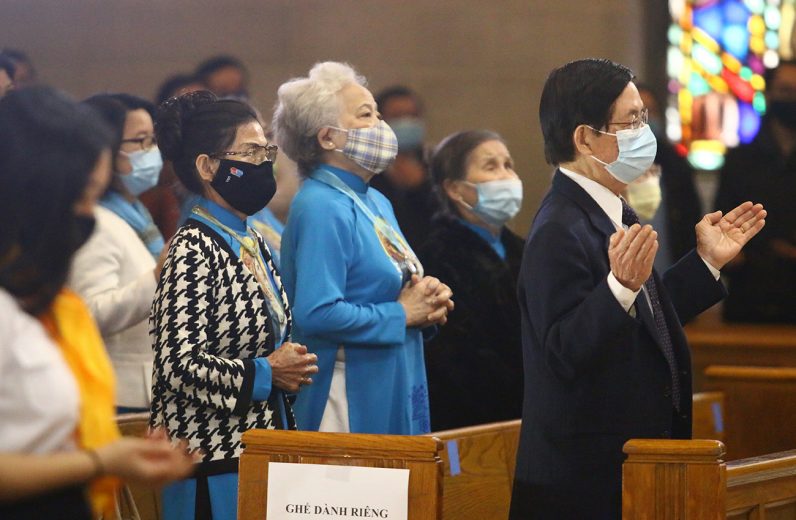 NEXT: Homelessness outreach looking for help as COVID resurges