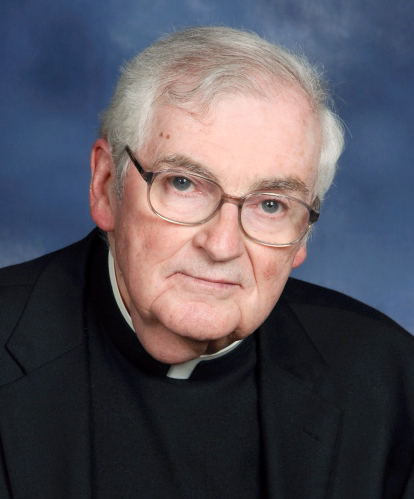 Father Owens also taught on the faculty of Roman Catholic High School before his appointment to the faculty of St. Charles Borromeo Seminary as Director of Field Education and Dean of Formation.

In 2002 he was appointed pastor of St. Alphonsus Parish, Maple Glen and named pastor emeritus in 2013. In recent years he has been in residence at St. Matthew Parish, Conshohocken.

But long before Msgr. Owens was a priest, he was a wonderful brother, according to his younger brother, Joseph. “He was the best friend I ever had and absolutely the finest man I have ever known,” he said.

Msgr. Brian Hennessy, the current pastor of St. Alphonsus, has personal memories of Msgr. Owens as a respected faculty member of St. Charles from his own seminary days, and now as a successor for the past two years at St. Alphonsus.

“The people today still speak of his spiritualty, his love for them and his openness to them,” Msgr. Hennessy said. “He also made a lot of improvements to the church.”

Later at St. Matthew’s he was still very active and gave great assistance to the pastor, Msgr. Hennessy added.

There was a viewing for Msgr. Owens St. Matthew Church, Conshohocken on Sunday Nov. 8 followed by an evening Mass for the parish.

The funeral Mass was Monday, Nov. 9 at St. Matthew’s, celebrated by Archbishop Nelson Perez. Among the concelebrants were Msgr. Joseph Garvin and Msgr. Stephen McHenry; Fathers James Gorman, Stephen Katziner and Dennis O’Donnell, and Msgr. Thomas Mullin, who was the homilist.

In addition to his brother Joseph, Msgr. Owens is survived by his sisters Genevieve, Judy and Cecilia; nieces, nephews and great-nieces and great-nephews.

PREVIOUS: Alex Trebek dies at 80; host of ‘Jeopardy!’ was educated in Catholic schools