Seven ways St. Joseph shows the heart of a father 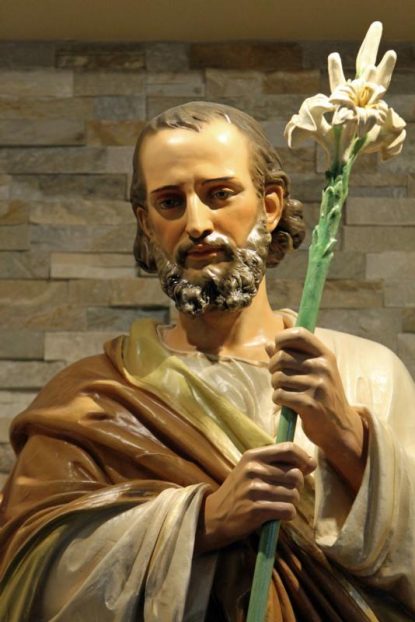 The 150th anniversary of the proclamation of St. Joseph as patron of the universal church was celebrated on the solemnity of the Immaculate Conception this month.

In honor of that anniversary, Pope Francis declared this liturgical year to be dedicated to St. Joseph through his apostolic letter Patris Corde (“With a Father’s Heart”).

What a gift to the universal Catholic Church to have a year dedicated to the fatherhood of St. Joseph!

St. Joseph is a beloved father. St. Joseph placed himself at the service of his vocation as husband and father. “He turned his human vocation to domestic love into a superhuman oblation of himself, his heart and all his abilities, a loved placed at the service of the Messiah who was growing to maturity in his home” (PC, 1).

St. Joseph is a tender and loving father. Through St. Joseph’s fatherhood, Jesus saw the tender love of God. Joseph taught him how to walk and offered him his loving embrace when he fell. Joseph teaches us to tenderly look upon our falls, weaknesses, and poverties. “The evil one makes us see and condemn our frailty, whereas the Spirit brings it to light with tender love. Tenderness is the best way to touch the frailty within us” (PC, 2).

St. Joseph is an obedient father. In every message from the Father, St. Joseph did what was asked of him. “In every situation, Joseph declared his own ‘fiat’, like those of Mary at the Annunciation and Jesus in the Garden of Gethsemane” (PC, 3).

St. Joseph is an accepting father. Joseph trusted in the angel’s words to him and lovingly accepted Jesus as his own son. He provided a protective home for Mary and Jesus and accepted his call to be a husband to Mary and a father to the Son of God, even when he believed himself unworthy to do so. “Joseph’s attitude encourages us to accept and welcome others as they are, without exception, and to show special concern for the weak, for God chooses what is weak” (PC, 4).

St. Joseph is a creatively courageous father. God entrusted the Holy Family to Joseph and worked through his creative courage to guide and protect the Holy Family. “Arriving in Bethlehem and finding no lodging where Mary could give birth, Joseph took a stable and, best he could, turned it into a welcoming home for the Son of God come into the world” (PC, 5).

St. Joseph is a working father. Work is a means of participating in the work of salvation. Joseph’s work as a carpenter provided a means for the Holy Family to thrive and to remain hidden in Bethlehem. Joseph taught this work to Jesus. “St. Joseph’s work reminds us that God himself, in becoming man, did not disdain work” (PC, 6).

St. Joseph is a father in the shadows. St. Joseph’s fatherhood was a hidden fatherhood that he had to learn how to live. “Fathers are not born, but made. A man does not become a father simply by bringing a child into the world, but by taking up the responsibility to care for that child. Whenever a man accepts responsibility for the life of another, in some way he becomes a father to that person” (PC, 7).

At the conclusion of the apostolic letter, Pope Francis echoes the words of Pope St. John Paul II’s teaching on the spousal meaning of the body – when a man or a woman makes a fruitful gift of self, they fulfill the very meaning of their being and existence – when he writes of St. Joseph’s giving the gift of self to Mary and Jesus. “Joseph found happiness not in mere self-sacrifice but in self-gift… Every true vocation is born of the gift of oneself, which is a fruit of mature sacrifice” (PC, 7).

During this year of St. Joseph, may he guide your heart to live a life of fruitful self-giving!

Jennifer Settle is director of programs for the Quarryville-based Theology of the Body Institute and co-author of the 44-day “Consecration to Jesus through St. Joseph: An Integrated Look at the Holy Family.”

PREVIOUS: What is truth? The question challenging Western civilization

NEXT: We need a lot of Christmas this year, so bring on the holly jolly