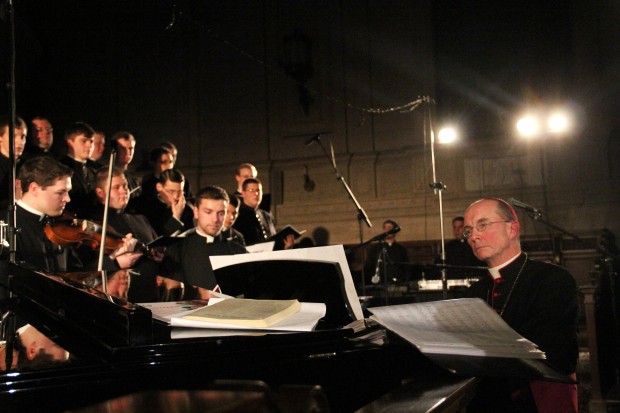 Bishop Timothy Senior, rector of the seminary, adds piano accompaniment with the seminarian choir and musicians at a previous Christmas concert. (Sarah Webb)

Due to the current COVID-19 restrictions the concert will be streamed live by Joyful Films instead of the customary performance for an audience. Following the initial streaming broadcast, the recorded version of the concert will remain available for viewing through the end of the year.

The 30-minute concert will include seven instrumental selections plus a Christmas medley of songs performed by three of the seminary’s scholas, or small choirs, named after St. Ambrose, St. Benedict and St. Chrysogonus.

Musical accompaniment and solos are provided by several current and alumni seminarians as well as faculty. A highlight of the performance will be the singing of Biebl’s famous seven-part Ave Maria by 23 seminarians in virtual choir.

“Christmas brings us joy and hope for the future which we need this year more than ever,” said Bishop Timothy C. Senior, rector of St. Charles Borromeo Seminary. “The Annual Seminary Christmas Concert is a highlight of the Advent season for our seminarians who look forward to bringing joy and hope to all people of good will by raising their voices in song.”

Before and after the concert, Seminary Vice President Cait Kokolus will provide a narrated tour of the seminary’s collection of Christmas crèches, featuring dozens of Nativity scenes from around the world.

For more information on the seminary, visit scs.edu.

PREVIOUS: St. Philip Parish to honor those who aid the poor