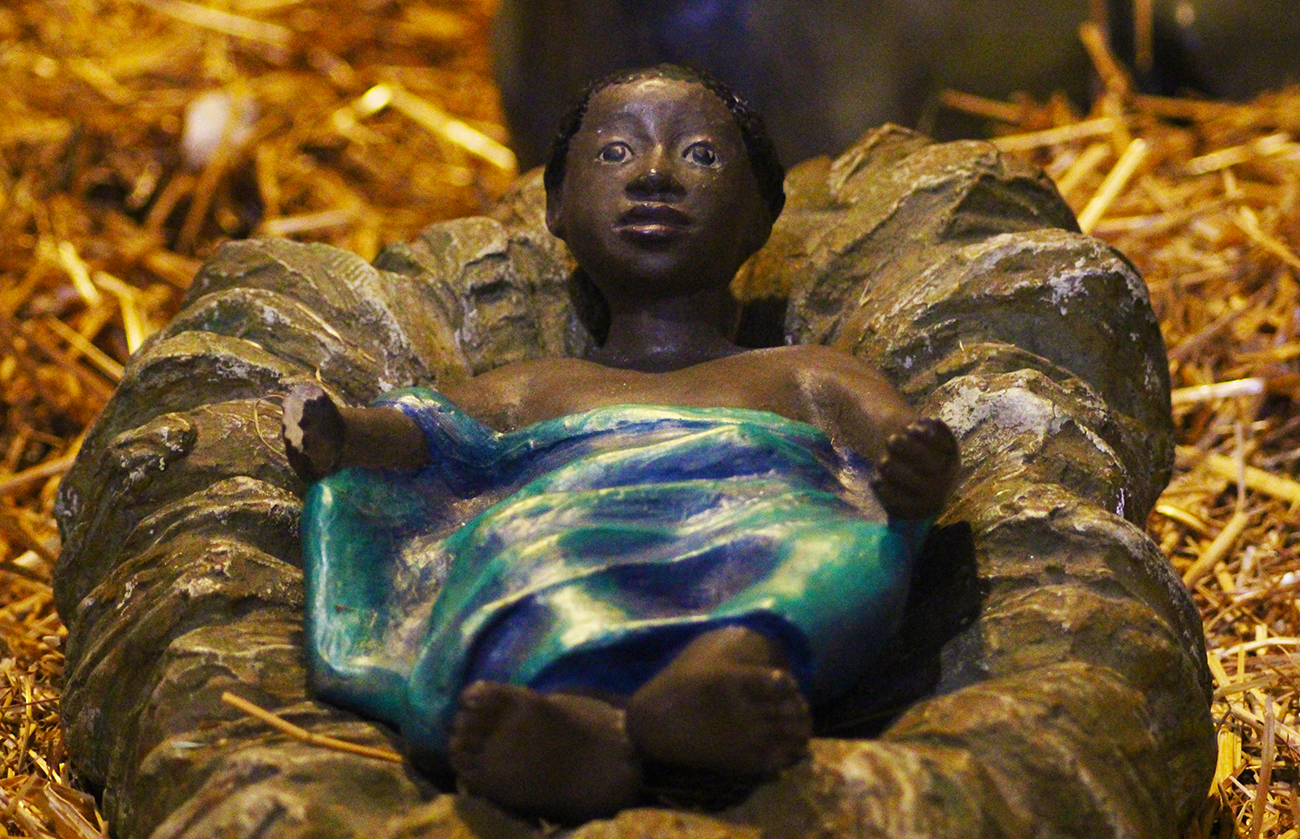 A statue of the infant Jesus rests in a Nativity scene at St. Cyprian Church in Philadelphia, Dec. 24. During midnight Mass, pastor Msgr. Federico Britto said Christmas “achieves a great leveling off” by ending divisions and “lifting us all up.” (Photo by Gina Christian)

During his homily for Dec. 24 midnight Mass, Msgr. Federico Britto, pastor of St. Cyprian Parish in the city’s Cobbs Creek section, described Christmas as a “miracle” that “gathers us all together in a great new burst of fellowship in the name of Christ.”

Speaking to some 60 faithful, Msgr. Britto said those in attendance had joined “as a family … to celebrate the same Lord, the same Savior … who promises to be with us always, in our good times and our bad.”

Parishioners from St. Cyprian’s English-speaking and African Francophone communities braved torrential rains to attend the two-hour liturgy, which was concelebrated by Francophone chaplain Father Rene Againglo and accompanied by a schola and small instrumental ensemble.

“Perhaps we questioned the presence of God, and we wondered if we would get through this year,” he said.

At the same time, he added, many have persisted in “(praying) hard for those afflicted” and for “those who were lonely and who died by themselves” due to the coronavirus.

Paradoxically, hardship can lead to a greater awareness that “our lives are lived together,” he said.

“Sometimes, when a tragedy happens … all of a sudden the barriers come down,” said Msgr. Britto. “Each and every one of us come together to support others, to show our love … our devotion … our care.” 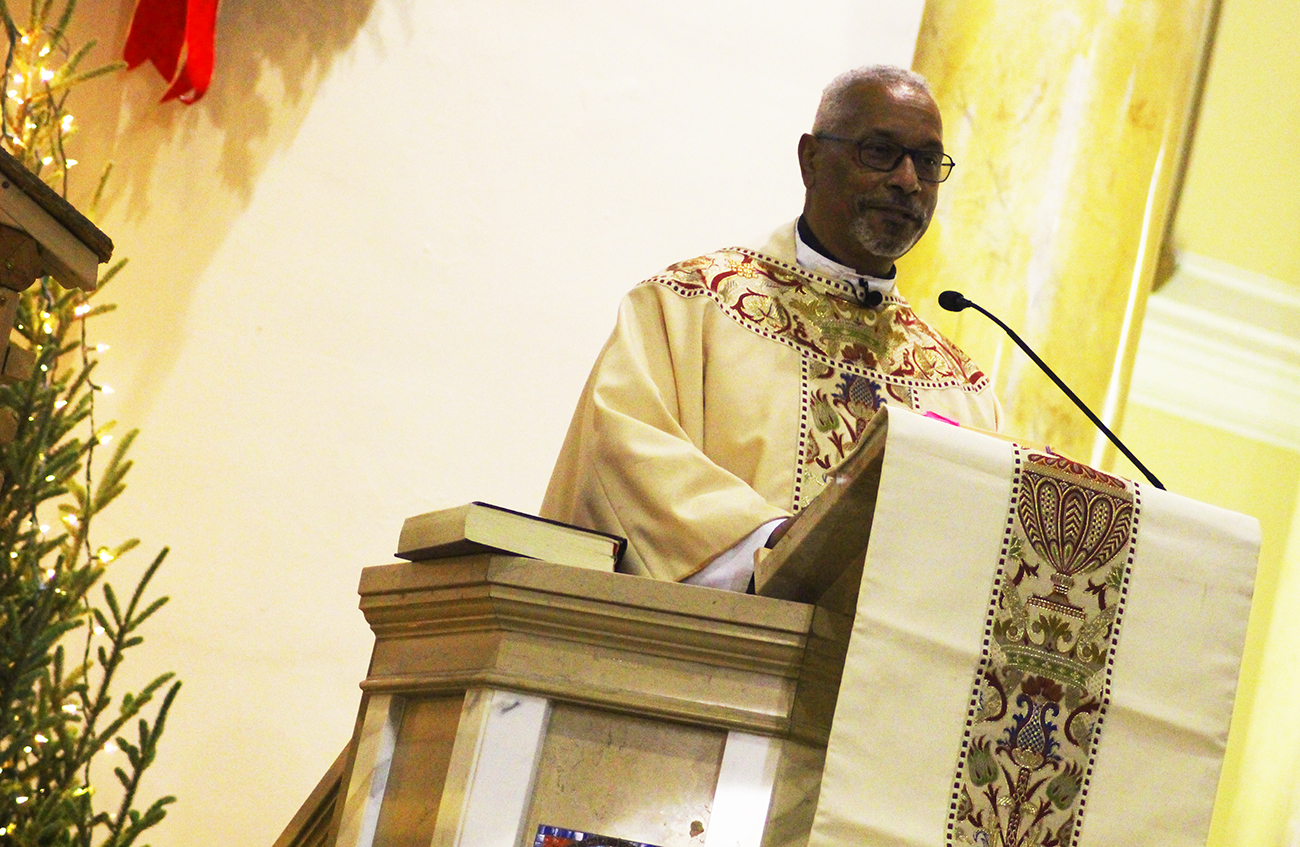 In his homily for a Dec. 24 midnight Mass, Msgr. Federico Britto, pastor of St. Cyprian Parish in Philadelphia, described Christmas as a “miracle” that “gathers us all together in a great new burst of fellowship in the name of Christ.” (Gina Christian)

Even those who face the extremes of human misery sense the transcendent nature of Christmas, he said.

Referencing the memoirs of a Soviet labor camp survivor, Msgr. Britto noted the holiday enabled the man and his fellow prisoners to realize “they were not altogether outcasts, nor were they lost souls, nor were they pieces of wreckage.”

Instead, said Msgr. Britto, “they felt like human beings, and that they had bonds with one another and with the whole world.”

Christmas Day “took them out of themselves,” he said. “Even the most frugal and fragile among them thought it their duty to be open-handed on a day like this.”

The commemoration of Christ’s incarnation and birth “achieves a great leveling off,” said Msgr. Britto.

“Nobody can feel superior to another on this day,” he said. “Neither should anybody feel inferior.”

Rather, Christmas “puts an end to all elitism and division,” he said.

Yet it does so not “by lowering us” to a common denominator, but by “lifting us all up,” he said.

“Just as a rising tide lifts all the boats in the harbor, so Christmas lifts all of us,” said Msgr. Britto. “It’s as if we are placed on a higher plateau.”

In taking on flesh, “Christ turns a foreigner into a neighbor, a stranger into a brother or sister,” he said.

The awareness of “our common humanity … brings about a wonderful happiness,” said Msgr. Britto.

However, he cautioned, such elation is “disturbing” because it conflicts with self-seeking, materialistic notions of contentment.

“Happiness is to be sought in community and shared humanity, rather than in individualism and hoarding,” he said.

Entering into humanity’s history, Jesus “made himself our friend, our brother, our companion on the road to God’s kingdom,” said Msgr. Britto. “He has taken away the distance between the human and the divine.”

With “a sense of (having) a living bond with another world,” said Msgr. Britto, faithful find that this world “becomes a friendlier place, and shines with meaning and hope.”