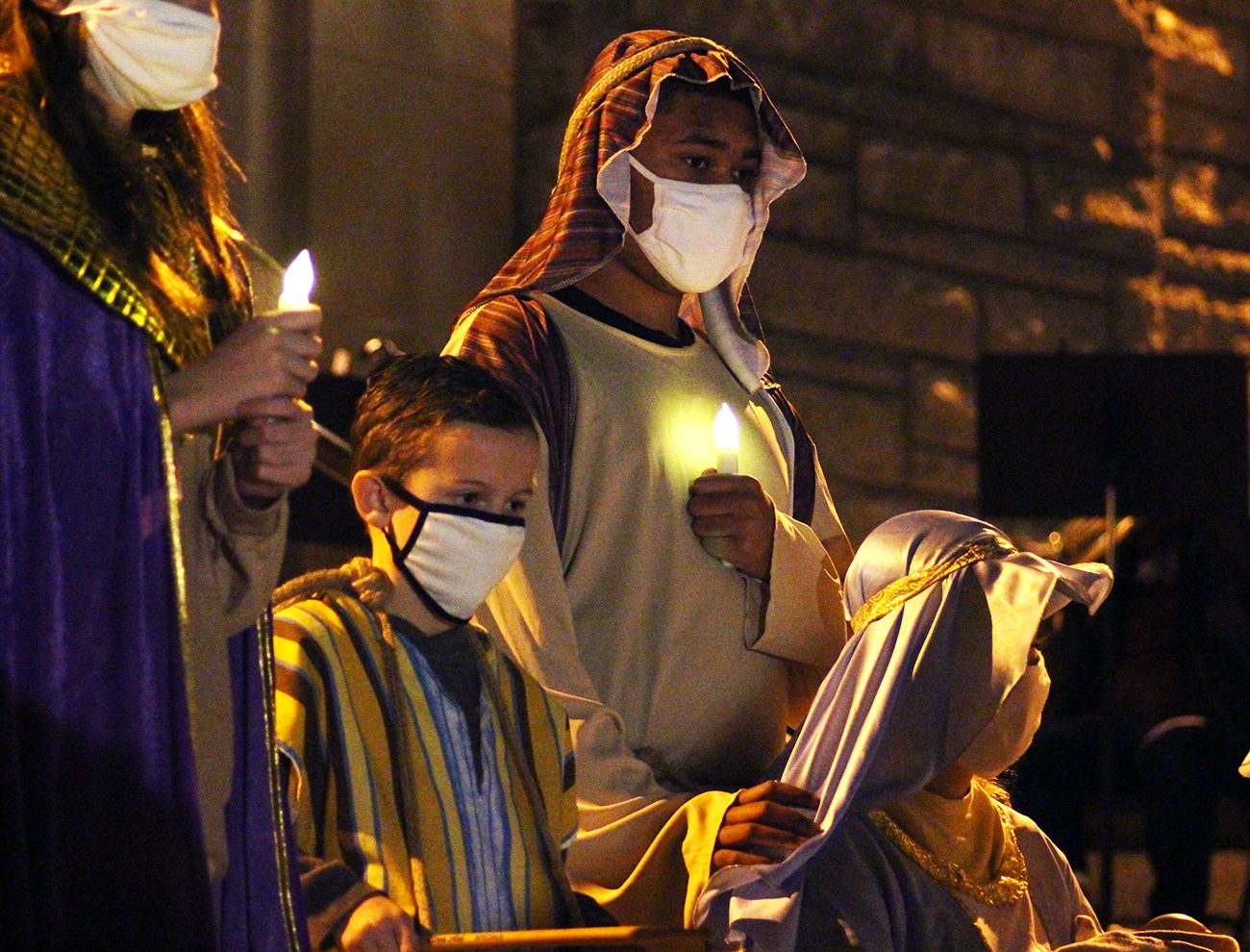 A parish and a Catholic school brought Bethlehem to the busy streets of Northeast Philadelphia this past Friday, while helping babies and seniors in the community.

St. Timothy Parish and Blessed Trinity Regional Catholic School teamed up to host a live Nativity Dec. 11. The parish grounds, which face the heavily traveled Levick Street, were transformed into a petting zoo and staging area for costumed students, who portrayed Mary, Joseph, angels, shepherds and Magi on the church steps.

Participants also collected donations of baby and senior items for distribution by the parish and by archdiocesan Catholic Social Services, which provides a broad array of support through its five family service centers.

A brass trio, a prayer service and hot chocolate rounded out the evening, during which children were encouraged to drop off letters to Santa for handling by parish and school volunteers.

Now in its sixth year, the event — which drew more than 100 attendees of all ages — took place just hours before a new set of state-issued COVID restrictions, limiting outdoor gatherings to 50, went into effect.

However, the pandemic did force organizers to use a doll, rather than an actual infant, to represent the newborn Jesus, said St. Timothy pastor Father Michael Olivere.

“We usually get a couple that just had a baby baptized” to represent the Holy Family, he said. 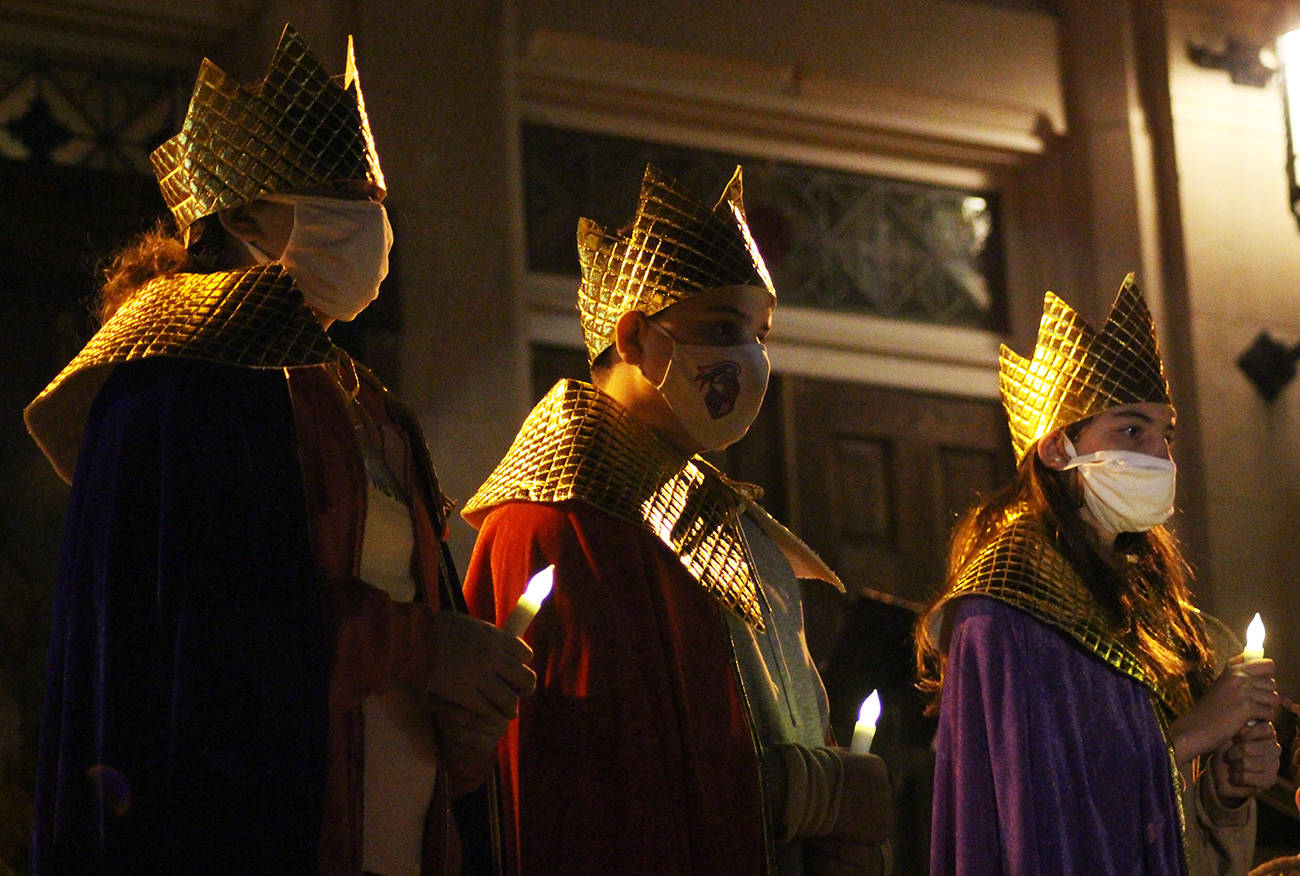 The tradition of recreating live Nativity scenes is believed to have originated with St. Francis of Assisi. According to biographer St. Bonaventure, the friar obtained papal permission in 1223 to set up a hay-filled manger, framed by an ox and an ass, as he preached about “the babe of Bethlehem.”

That “realistic aura” is more needed than ever after months of virtual interactions due to COVID, said Father Olivere.

“Everybody is just so tired of Zoom,” he admitted. “This connects to the Scriptures in a very real and tangible and beautiful way.”

Blessed Trinity principal Linda Milewski agreed, noting that students have “missed the sense of community and seeing their friends” amid the pandemic.

Although the normal post-event party in the school gymnasium had to be scrapped, keeping the tradition in place gave “everybody … a little bit of a boost to feel better,” she said.

And Milewski was grateful not to repeat one incident from the Nativity’s first year. 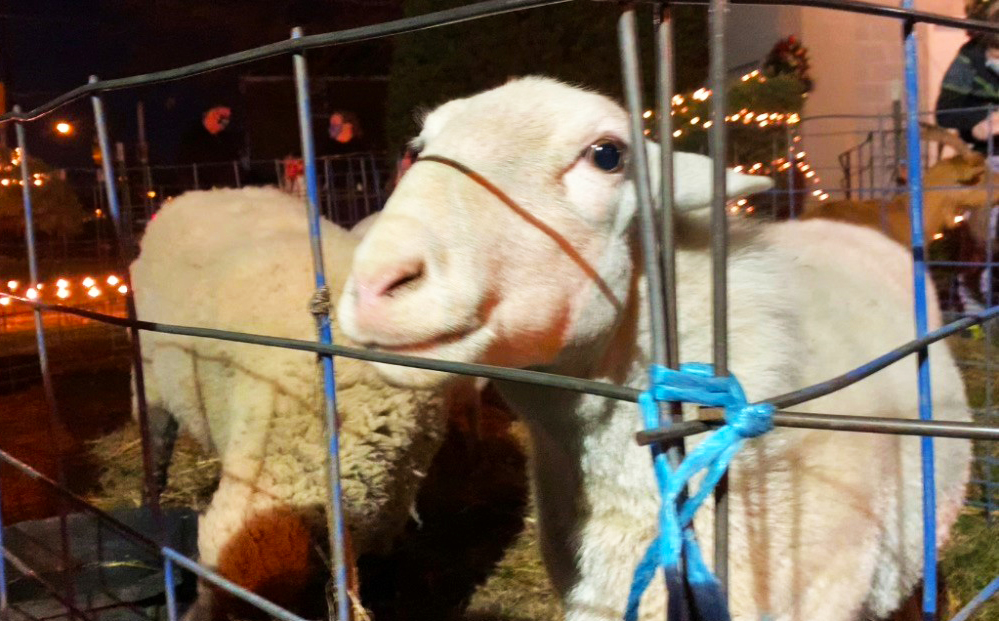 “We had a camel who had been out all day at different events, and when he got here, he was stressed,” she recalled. “He just wanted to get out of the enclosure, and he got loose on Levick Street.”

Fortunately, she said, the animal was calmed and safely returned to the display by his handlers.

Even with such unexpected mishaps, the Nativity remains “a wonderful public witness to the faith,” said Father Olivere, who led prayers for “peace and justice” as well as “the poor and the helpless, the cold and the hungry and the oppressed, the sick … those who mourn, and the unloved.”

Seeing the message of Christmas in action made attendee Lori Turner “feel overwhelmed.”

Turner said she was proud of daughter Jhordin, a Blessed Trinity seventh-grader who was “personally nominated by her religion teacher” to appear as an angel in the Nativity scene.

“I’m proud as her mother to know that what I taught her shines through while she’s in school, when she’s interacting with her teachers and others,” said Turner. “It’s important in our family.”

Father Olivere said “every parish should aspire” to stage a live Nativity.

“It really gets at the roots of what we celebrate in the Advent and Christmas season,” he said.

PREVIOUS: New directives aid celebration of Christmas at home or in church