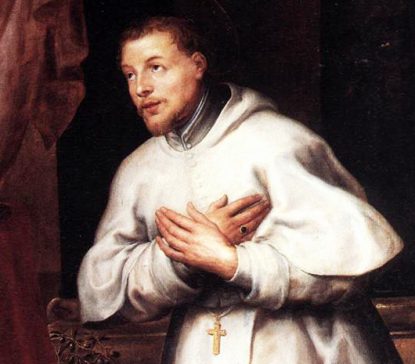 The Hebrew Bible’s Book of Leviticus (chapter 25) describes an institution that scholars agree may never have been implemented – the Jubilee Year. Every 50th year a jubilee was proclaimed. It was to be a sort of national sabbatical, homecoming, time of reconciliation and renewal.

The first Sunday of Advent in the church’s current liturgical year (Nov. 29, 2020) opened a 14-month Norbertine Jubilee that will culminate on Christmas Day 2021, the 900th anniversary of the founding of our order when St. Norbert and his first disciples made their profession of vows in the little chapel of St. John the Baptist at Premontre, France where they had settled in the spring of 1120.

Jubilees in the biblical sense are causes for rejoicing but they are also privileged times for thanksgiving for what has been and is still, and on the present in looking to a future that builds on the past but that also breaks new ground.

Since that Christmas Day 1121 the world has seen the opening of about 700 Norbertine communities of men and women. Some were doomed to fail from the beginning but hundreds more were the victims of sea changes such as the Black Death, the Reformation in Germany, the Thirty Years War, the dissolution of the English monasteries, the decisions of so-called enlightened heads of state, the French Revolution and the Spanish secularization of religious properties.

There was no 700th anniversary jubilee. By the end of the first quarter of the 19th century we existed only in the Austro-Hungarian Empire (Austria, Hungary and Czechoslovakia).

But new shoots of life arose from the stump that remained. By the time Father Bernard Henry Pennings and his two companions arrived in Hoboken, New Jersey on Nov. 13, 1893, abbeys in Belgium, Holland and France were thriving and Norbertine missions were taking root in Brazil and Africa and would soon be doing so in the United States and India.

At the beginning of this jubilee we are in a precarious time. Except in India, the Congo, Brazil and St. Michael’s Abbey in California, vocations are fewer than in decades past or non-existent.

An advantage of a 900-year history is that a community can dare to believe that it can once again thrive, despite pandemics, oppressive governments, economic and environmental peril, and secularized cultures that see religious belief as a non-starter.

As we remember what has been, we give thanks for a present which, though precarious, is a cause for hope. Our 900-year history has never before seen the kind of association and collaboration of professed members with laity who have helped make us who we are and commit themselves to walk with us into an uncertain future.

Our present Abbot General Jos Walters has written that one reason for our ability to survive these nine centuries is that we hold to a certain unity within the order while allowing for each community to adapt, within the bounds of our charism, to the local environments and situations in which they found/find themselves.

That pattern was established by St. Norbert who was a prophet pushing the edges from the inside of society and the church. It was brought to our country by Bernard Henry Pennings whose pioneer spirit has consistently given rise to communities willing to think broader and deeper about their common life and the shape of their apostolates.

Lay men and women have been and remain partners with us professed Norbertines in that enterprise and we must count on one another continuing to do so if we will not only survive but thrive for the life of the world in the reign on God.

NEXT: ‘Creative courage’ for the new year