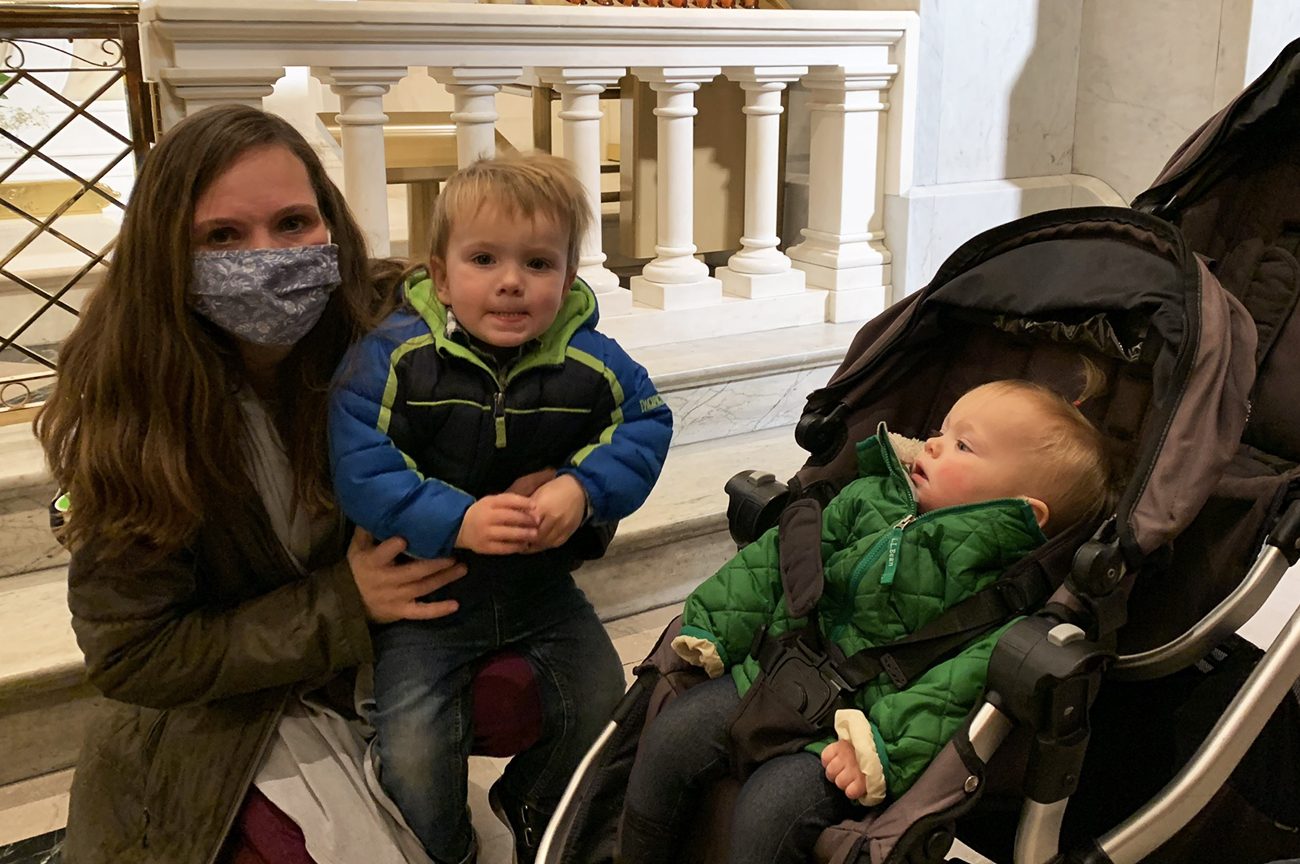 Sarah Leopold of St. Francis of Assisi Parish in Springfield, along with her son Ambrose and daughter Mary, attended the Jan. 29 "Mass for Life" at the Cathedral Basilica of SS. Peter and Paul in observance of the largely virtual 2021 national March for Life. (Gina Christian)

Quoting the theme of the 2021 national March for Life, the archbishop encouraged some 110 in-person and 1,500 online faithful during a Jan. 29 Mass for Life he celebrated at the Cathedral Basilica of SS. Peter and Paul in Philadelphia.

The liturgy coincided with the national demonstration in Washington, D.C., which organizers revamped as a largely virtual event due to COVID and social unrest. Typically, thousands of area residents travel to Washington D.C. to participate in the march, an annual protest of two 1973 Supreme Court decisions, Roe v. Wade and Doe v. Bolton, that denied legal protections of the unborn while substantially limiting state regulation of abortion.

Prior to the Friday morning Mass, Cathedral rector Father Dennis Gill invited attendees to turn in prayer before an image of Our Lady of Guadalupe, “patroness of the Americas and intercessor for the unborn,” while the parish’s director of music, Charlene Angelini, sang the ancient Carmelite chant “Salve Mater Misericordiae (Hail, Mother of Mercy)”.

In his homily, Archbishop Pérez recalled his long participation in the March for Life, which extended back to his days as a seminarian, and which included a more recent trip that left him stranded in Washington for a week due to a snowstorm.

The Mass at the cathedral, though far smaller in attendance than the thousands the March for Life typically draws, was no less meaningful, he said.

“If there’s one thing this pandemic has taught us, it’s that there are all sorts of ways to gather,” he said, adding that Catholics “have always understood that” since “Christ brings us all together” throughout time and space during the sacrifice of the Mass.

Tom Stevens, president and CEO of the Pro-Life Union of Greater Philadelphia, noted that the logistical shift also spurred his organization “to change with the times and to figure out new ways to be effective.”

One unexpected benefit of having to create local observances — such as last week’s Philadelphia March for Life – was the chance to increase awareness of abortion’s impact in area communities, said Stevens, who served as lector at the liturgy.

Hundreds of participants in the Pro-Life Union’s Jan. 23 march through the city paused before the Philadelphia Women’s Center, where an annual 6,500 abortions make the facility “the worst clinic … in Pennsylvania and perhaps the worst in the tri-state area,” said Stevens.

“For people who have no idea that (place) exists, to march by there … and (hear) about what it does and then to pray there, I think that was a significant opportunity that wouldn’t have happened if we had gone to the regular march,” he said.

More than a single, high-profile event, the pro-life mission is a broad, long-term commitment, said the archbishop.

Reflecting on the day’s Gospel passage (Mk 4:26-34), in which Jesus likens the kingdom of God to seeds that grow silently but surely, Archbishop Pérez urged listeners to “continue to sow the seed of raising our prophetic voices for the defense of life.”

Like the sower in Mk 4:1-9 and Mt 13:1-9, that seed should be scattered “extravagantly,” just as the Lord himself is “extravagant in his love,” said the archbishop.

While admitting that “at this particular moment for the pro-life movement, there is some uncertainty and apprehension … and probably rightly so,” Archbishop Pérez said, “as people of faith, we remember that (in) the end, God’s in charge.”

He also stressed that pro-life supporters should “not allow any particular moment in time to determine” the overall outcome of their labors.

“At times, it looks like it’s two steps forward and one step back,” he said. “Let the Lord worry about where (the seed) falls and where it germinates and where it bears fruit.”

That harvest is assured, he stressed.

“Know that when that seed falls … (it) has a life of its own,” said the archbishop. “Don’t be upset with small beginnings.”

The archbishop’s message resonated with Katherine Chetta of St. Eleanor Parish in Collegeville, who brought her three children, ranging in age from 4 to 9 years old, to the Mass.

“It’s really important for me as a mom with little ones to impress on their heart the need to thank God for the gift of life, and to be a light in that darkness,” she said. “It’s important to show my children that we need to always fight and strive to dignify those who are the unborn, the least of us.”

Last year, Leopold attended the national march with her then-infant son Ambrose, while she was nine months pregnant with now 1-year-old baby Mary. Although a return trip was not possible at this time, the lesson from today’s commemoration was no less powerful for her children, she said.

“I just want them to learn from an early age that all life is precious and God is the author of all life,” said Leopold.

Caroline Guy, a parishioner at St. William in Philadelphia, was “especially glad” to be at the Cathedral Friday morning.