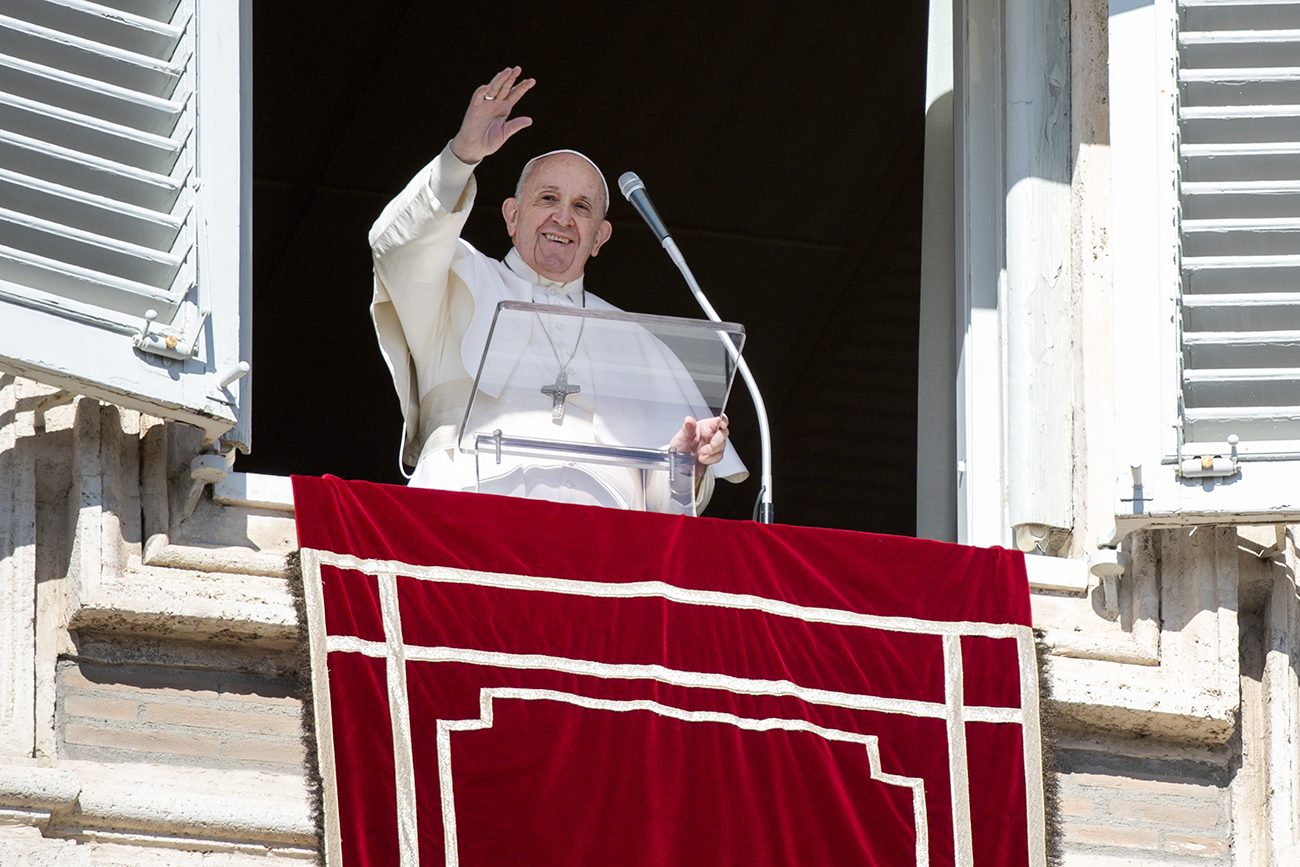 Pope Francis greets the crowd as he leads the Angelus from the window of his studio overlooking St. Peter's Square at the Vatican Feb. 14, 2021. (CNS photo/Vatican Media)

VATICAN CITY (CNS) — The Gospel story of Jesus healing the leper illustrates how nothing will stop God from tenderly and compassionately drawing close to people who want to be healed and saved, Pope Francis said.

“Each one of us can experience wounds, failure, suffering, selfishness that make us close ourselves off from God and others,” the pope said. “Sin closes us in on ourselves because of shame, because of humiliation, but God wants to open our heart.”

“Jesus announces to us that God is not an idea or an abstract doctrine, but God is the one who ‘contaminates’ himself with our human woundedness and is not afraid to come into contact with our wounds,” the pope said Feb. 14, commenting on the day’s Gospel reading before praying the Angelus with visitors in St. Peter’s Square.

On a brilliantly sunny but frigid day, Pope Francis asked people in the square to give a round of applause to priests who model God’s closeness, tenderness and compassion in the way they administer the sacrament of reconciliation.

Such priests, he said, are able to draw people back to God — “people who feel that they are nothing, who feel they are laid low because of their sins — with tenderness, with compassion, good confessors who do not have a whip in their hands, but just welcome, listen and say that God is good, and that God always forgives, that God does not get tired of forgiving.”

In fact, the pope said, the story in Mark’s Gospel (Mk 1:40-45) of Jesus healing the leper depicts both Jesus and the man with Hansen’s disease breaking the law.

“Lepers were considered impure and, according to the prescriptions of the law, they had to remain outside of inhabited centers,” the pope said. “They were excluded from every human, social and religious relationship” and were banned from the synagogue.

But, he said, Jesus allows the man to approach and “is moved even to the point of extending his hand and touching him. This was unthinkable at that time.”

“This is how he fulfills the good news he proclaims: God draws near to our lives, he is moved to compassion because of the fate of wounded humanity and comes to break down every barrier that prevents us from being in relationship with him, with others and with ourselves,” the pope said.

Jesus did not stop at saying something to the man, but he touched him, the pope noted. “To touch with love means to establish a relationship, to enter into communion, to become involved in the life of another person even to the point of sharing their wounds.”

“With that gesture,” he said, “Jesus reveals that God, who is not indifferent, does not keep himself at a ‘safe distance.’ Rather, he draws near out of compassion and touches our life to heal it with tenderness. It is God’s style: nearness, compassion and tenderness.”

After reciting the Angelus prayer, Pope Francis noted it was Valentine’s Day and offered his prayers and blessings for couples in love, especially engaged couples.

He also used the occasion to publicly praise the government of Colombia for granting temporary protection status to Venezuelan migrants who have fled the chaos and extreme poverty in their country.

Colombia, he said, is “welcoming, protecting and integrating” the Venezuelan migrants. “It is not a super wealthy, developed country that is doing this — no, this is being done by a country that has many problems in development, poverty and peace,” he said. Even so, “they have had the courage to look at those migrants and to create this status.”

NEXT: Lent turns us inside out to set us straight