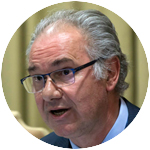 Over the past year, the Pontifical Academy for Life has invested considerable thinking and action into the issues generated by COVID-19, addressing the challenges of the pandemic from several different angles. I would summarize the contribution of the academy as threefold: ethical, existential and spiritual.

First, with its documents in March and July 2020, and most recently with a joint statement with the Vatican COVID-19 Commission, the academy has tackled all the major ethical issues generated by the pandemic. While in the beginning, problems of clinical ethics were dominant — for example, the need to articulate criteria for resource rationing in intensive care units — issues of public health became progressively more relevant, especially with respect to the equitable distribution of the vaccine.

Relying upon a matrix of ethical considerations grounded in the principles of justice, solidarity and inclusiveness, the statements of the academy speak to a global perspective, asking for rich countries in the West to measure their own perception and response to the problems raised by the pandemic with the predicament of poorer countries in the Global South.

Though all rich and poor nations have been vulnerable to the virus, the latter have paid the highest price, bearing the long-term consequences from the lack of cooperation and failure of international solidarity. The pandemic has worsened the inequalities already associated with processes of globalization, making more people vulnerable and marginalized without health care, employment and social safety nets.

Certain key categories have become central to the ethical discourse of the academy, such as the notion of “pharmaceutical marginality,” the “universal destination of goods,” the overcoming of the logic of “vaccine nationalism,” and so on. With its documents, the academy has provided both the Catholic Church and the international community with an ethical framework to address all the different phases of the pandemic.

I think of its effort as an act of intellectual solidarity with which, speaking on behalf of the church, the academy contributes to the universality of ethical discourse and a call for action on behalf of the most poor and vulnerable.

There is also an existential component to the statements of the academy. They offer an invitation to reflect, sharing in the universality of the puzzlement brought about by the pandemic, without any attitude of assertive superiority. The church is made of human beings who experience, with other human beings, the vulnerability of the human condition.

Choosing a meditative style, together with more overtly normative recommendations, the academy has reminded all people of goodwill, on behalf of the church, that the pandemic has brought into relief the limits of our freedom and the ambiguous character of our autonomous pretentions, recognizing the universal dimension of our human frailty.

The church knows how to listen, in addition to exercising its responsibility to teach. Other human beings are fellow travelers in the journey of life, companions in that search for truth God’s Spirit sustains with its universal presence.

Finally, the spiritual dimension. Although in its texts the academy does not shy away from clear exhortation to action, it does so ultimately on faith premises, relying upon a vision of the human being and of the world that rests on God’s disclosure of love.

As Pope Francis reminded the academy, in his 2019 letter “Humana Communitas,” “In our time, the church is called, once more, to propose the humanism of the life that bursts forth from God’s passion for human beings. Our commitment to valuing, supporting and defending the life of every human being is ultimately motivated by God’s unconditional love.”

Believers and nonbelievers can be grateful for the academy’s threefold witness: to discern the call of the good in uncertain times, to share in the companionship of serious thinking and to speak with the hope that nourishes the never-ending confidence in the tenderness of God.

Roberto Dell’Oro is the director of the Bioethics Institute and a professor in the department of theological studies at Loyola Marymount University in Los Angeles. He is a member of the Pontifical Academy for Life.

NEXT: Keep childlike joy in our greatest hope: the return of Jesus