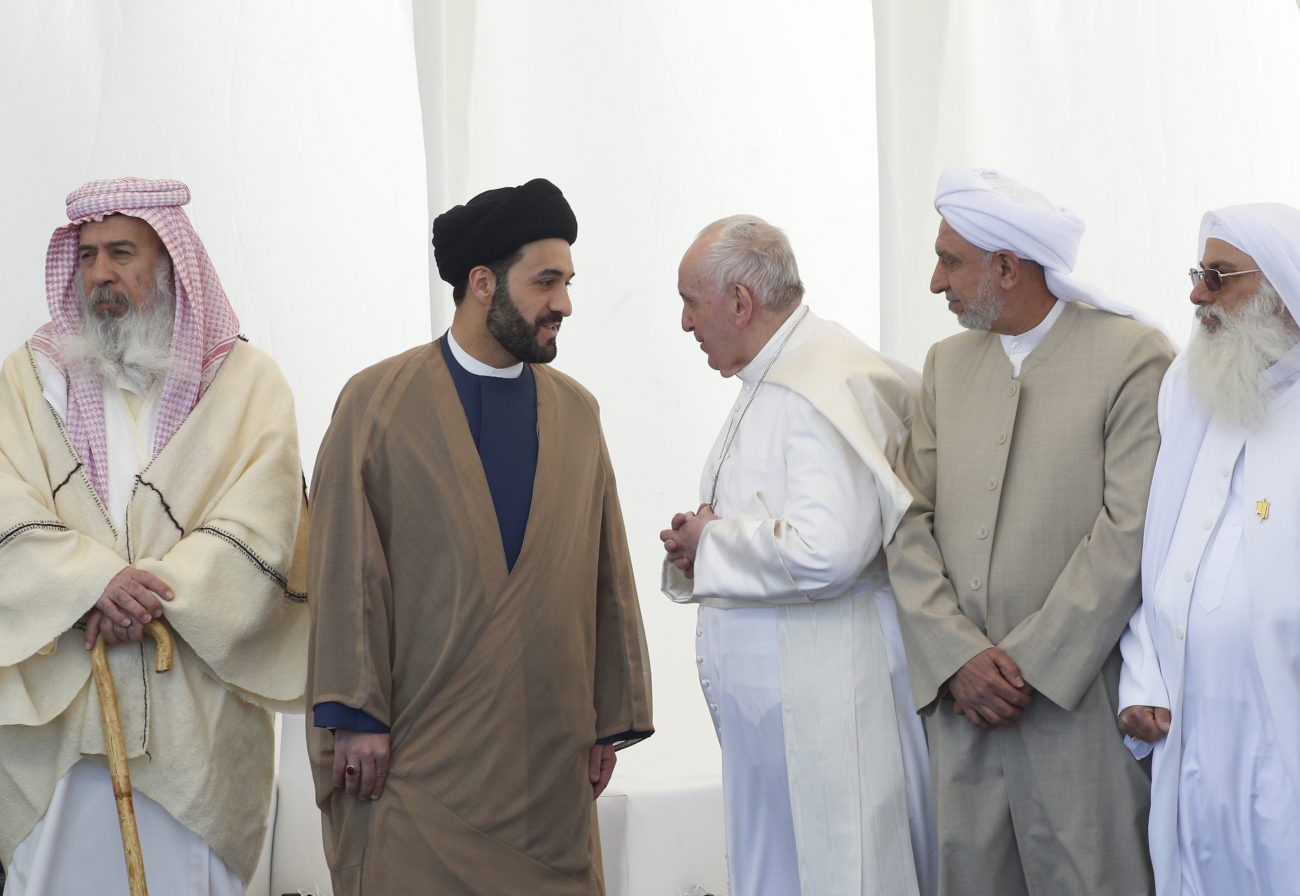 Pope Francis recently completed an apostolic visit to Iraq. Any journey of a pope is newsworthy, but this trip captured the hearts and imaginations of many. It was the first visit of a pope to Iraq.

Iraq is a country that has been the center of the world’s attention for decades, being the site of several recent wars. It is the country where the biblical city of Ur is located, the ancestral home of the Patriarch Abraham, who is revered by three major world religions: Judaism, Christianity and Islam.

Pope Francis, like his predecessors St. Pope John Paul II and Pope Benedict, each have embraced the moral imperative to reach out to people of good will across the religious divide and work for understanding and peace.

During all three of these papacies there have been people that are skeptical of such outreach, mainly due to fear of “syncretism.” That is the amalgamation of different religions that can appear to be a sort of “melting pot” of religions. Each faith tradition that engages in syncretism gets added to the mix, and a new synthesis emerges, related to the component parts yet changed and different. There is a legitimate concern that this could happen in interreligious dialogue.

Vatican II in the Declaration on Non-Christian Religions (Nostra Aetate) recognized the pluralistic world of today and reflects that the Church “in her task of promoting unity and love […] considers above all in this declaration what men have in common and what draws them to fellowship” (NA §1).

The misperception between dialogue and syncretism resulted in a message of clarification 35 years later with Dominus Iesus, which clarified that engagement in dialogue does not mean surrendering the truth of the Gospel. It particularly warned against relativism, which some had inferred from dialogue that all religions are the same or are simply alternate roads to achieve salvation.

For example, Dominus Iesus states one such wrong idea could include “relativistic attitudes toward truth itself, according to which what is true for some would not be true for others” (DI §4).

Christians, united in a common baptism, acknowledge the same God. We can disagree on points of theology, or of praxis, but we are in the same “family” of Christianity. Likewise, from a Christian perspective, we can pray with Jews. We share belief in the same God, and we know from the Old Testament/Hebrew Scriptures that the prayers of the prophets are our prayers as well.

How does one handle interfaith prayer? What about when Christians and Jews and Muslims and Buddhists and Hindus (and others) gather? Authentic interfaith prayer — prayer that is faithful to the faith traditions of all participants — does not begin with “we pray together.” How can it? How can a Christian, who believes in the God of Abraham and Moses, pray with a person who prays to another deity? Yet we respect their right to pray as they believe.

A clearer way to do this is to introduce the prayer time as “we come together to pray.” As a Catholic I stand by respectfully as a believer offers a prayer, faithful to their tradition, to their notion of God. It is not my prayer, but I respect their right to pray as they see fit. Correspondingly, they stand respectfully as I offer my prayer from a Catholic context.

I have been in gatherings where people of various faith traditions offer their prayers imploring God to bless the world and its people with peace and understanding. For some, I say “Amen” with them. For others, I pray alongside them.

This is the formula used by Popes John Paul II, Benedict XVI and Francis. They did not pray as if all attending shared the same beliefs. No syncretism, just respect.

In Ur, Pope Francis reflected on Abraham, stating that “Today we, Jews, Christians and Muslims, together with our brothers and sisters of other religions, honor our father Abraham by doing as he did: we look up to heaven and we journey on earth.”

At the conclusion of his address Pope Francis offered his prayer in the presence of those gathered, including in part, “As children of Abraham, Jews, Christians and Muslims, together with other believers and all persons of good will, we thank you for having given us Abraham, a distinguished son of this noble and beloved country, to be our common father in faith.”

He concluded his prayer with “Guide our hands in the work of rebuilding this country and grant us the strength needed to help those forced to leave behind their homes and lands, enabling them to return in security and dignity, and to embark upon a new, serene and prosperous life. Amen.”

Msgr. Gregory J. Fairbanks is a former director of the Archdiocese of Philadelphia’s Office of Ecumenical and Interreligious Affairs (2005-2008) and a former official with the Vatican’s Pontifical Council for Promoting Christian Unity (2008-2015). He is currently a board member of Interfaith Philadelphia (since 2015) and dean of the School of Diaconal Formation at St. Charles Borromeo Seminary.

PREVIOUS: How badly do we want to return to the church?

NEXT: In year of COVID, a change of era and perhaps growth