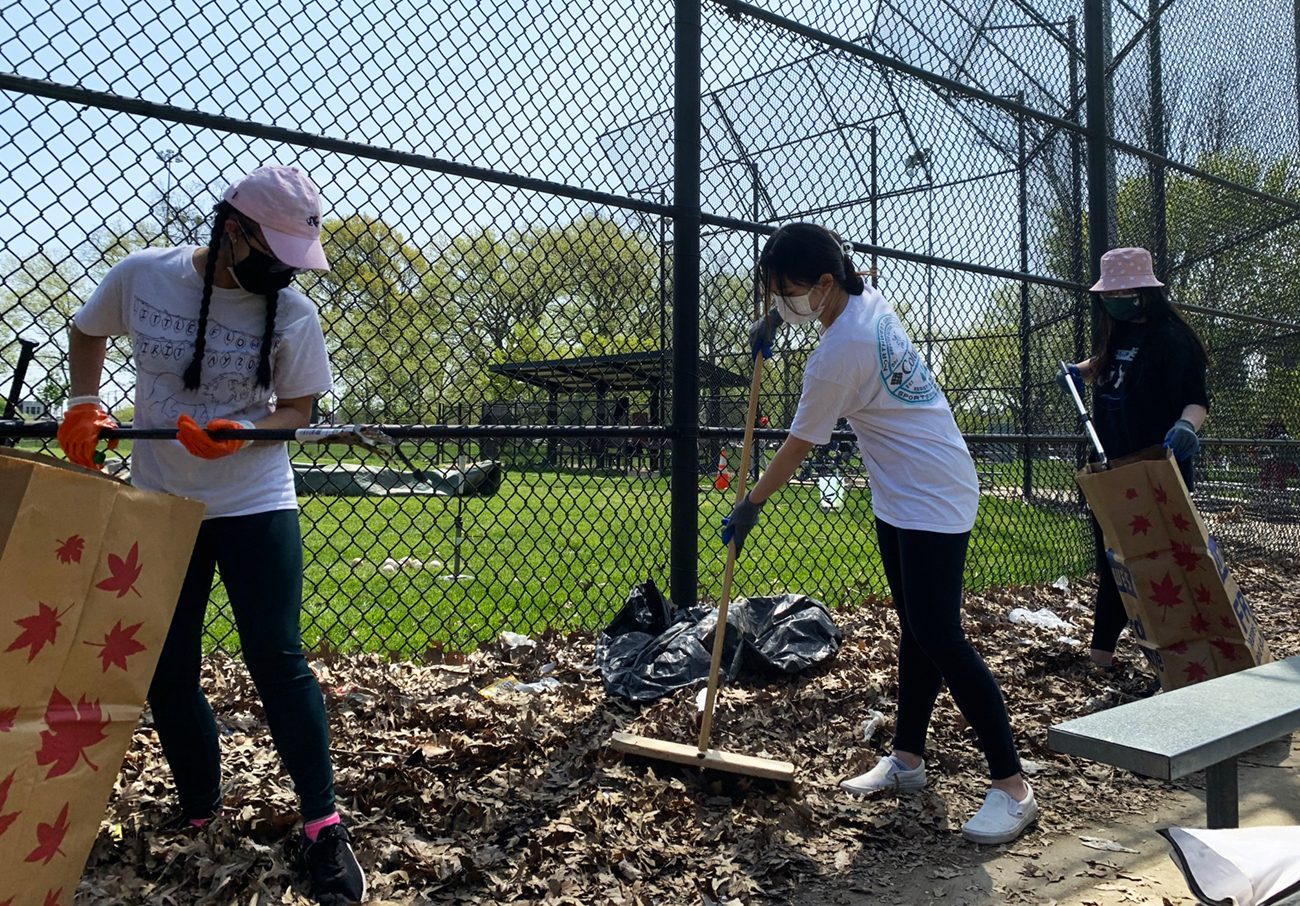 Students at an archdiocesan high school are rolling up their sleeves – and using their business skills — to “love their park,” along with their community and the planet itself.

“This is a really well-used park,” said Little Flower principal Colette Weber. “There are lots of different (sports) teams that come here every weekend, and it’s a great venue for people to have barbecues.”

However, as with most neighborhoods in Philadelphia – named the dirtiest city in America last year by travel insurance website InsureMyTrip – piled-up trash often mars the landscape. The problem is compounded by the city’s lack of a regular municipal street-sweeping program, a deficit that sets Philadelphia apart from its peers.

Now juniors, the teens found the inspiration for their initiative not in the soil, but on social media.

“It started on Instagram,” said Jenny Le. “We looked at an environmental meme, and we thought, ‘Hey this is funny, but we feel like it’s a serious topic.’ So we decided to create this club to spread the word about it.’”

Under the moderation of theology teacher Angelica Corridoni, the first order of business was to increase the number of recycling bins stationed throughout the school, said the students.

But the group’s vision is as broad as its name suggests, said Pham.

“We want to make everyone more aware of how their daily habits can harm the earth,” she said. “And we want to raise awareness of alternatives, what people can do to improve their lifestyle.”

“We’re currently telling people to upcycle, to reuse clothes and to thrift (shop at thrift stores),” said Vivian Le. “And also how to repurpose items and plastics.”

Jenny Le stressed “we need to stop single-use plastic,” while Pham recommended “water filters and even reusable ice cubes and bags,” adding that “every day, so much plastic is accumulating” throughout the world.

In his video message for Earth Day, Pope Francis said “time is pressing” to “create a fair, equitable, environmentally safe planet,” noting “COVID and climate change show that there is no time to lose.”

To so daunting a task, the Planeteers bring a “very business-oriented, entrepreneurial” mindset, said Weber.

“They like to be given tasks they can research, and then they give us a presentation to pitch ideas,” she said.

Among the group’s projects have been suggestions for native tree installations, lunchtime PowerPoint presentations and sales of washable face masks and “little plant kits,” said Rayer.

Such efforts are part of a broader commitment the school has to the Hunting Park community, said Weber.

“We feel like Little Flower is absolutely in the right neighborhood, and we want to try to help as much as possible,” she said.

The school has already partnered with the nearby Lenfest Center, a community hub sponsored by the North10 Philadelphia and H. Chase Lenfest foundations. Last year, raised garden beds created by Little Flower president Jeane McNamara and tended by students yielded a “big bumper crop” that Lenfest was able to distribute to neighbors. Seeds are ready to be sown for a new harvest, said Weber.

“These are the kind of things that build character,” said Burnley, a retired Philadelphia educator and now a member of St. Charles Borromeo Parish in Sicklerville, New Jersey.

“These girls have just bloomed,” she said.