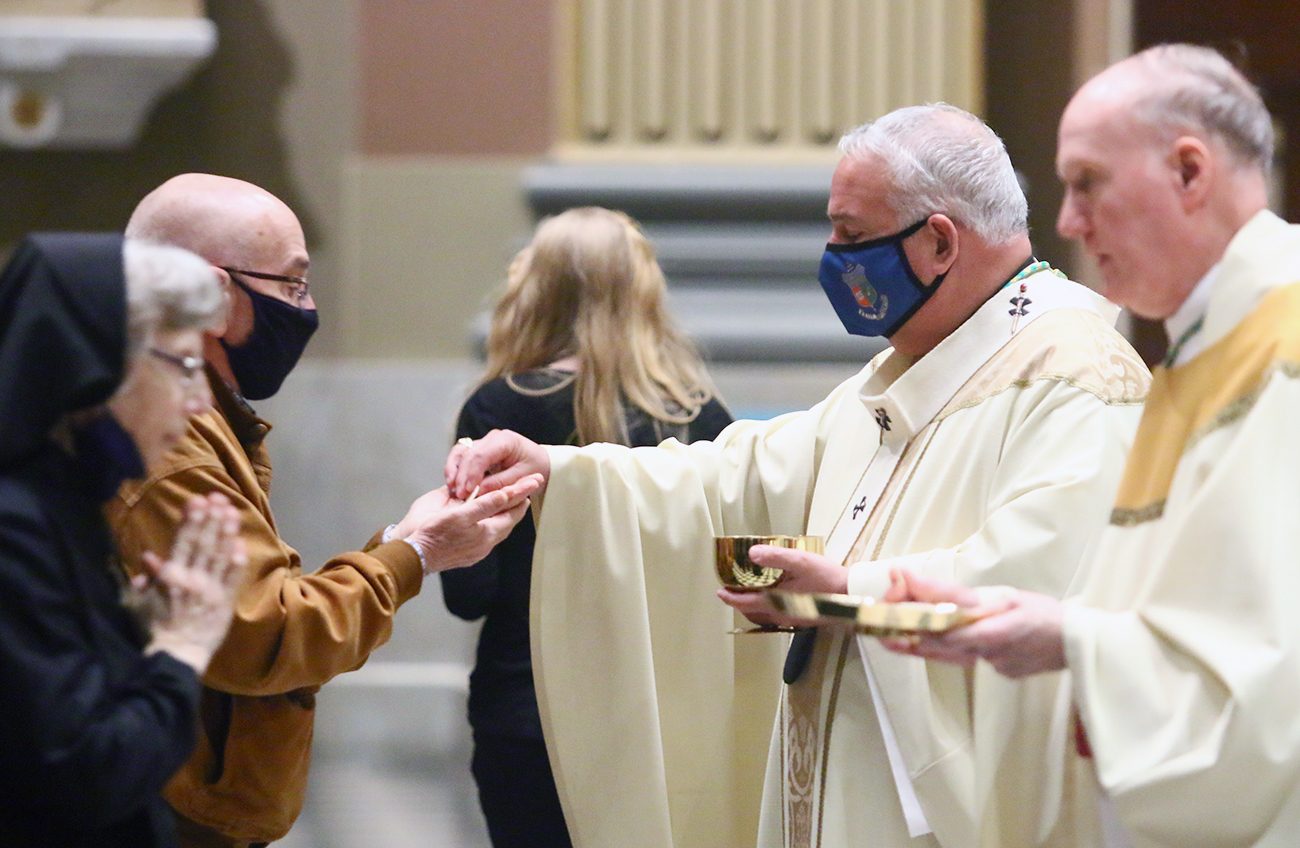 Archbishop Nelson Pérez distributes holy Communion during the Mass of the Lord's Supper at the Cathedral Basilica of SS. Peter and Paul, April 2. The liturgy marked the start of the Paschal Triduum, a time of "beautiful spiritual intensity," said the archbishop, who was the principal celebrant and homilist. (Sarah Webb)

(View photos from the Chrism Mass, the Mass of the Lord’s Supper and Good Friday at the Cathedral Basilica of SS. Peter and Paul.)

The archbishop was the principal celebrant and homilist for the Mass of the Lord’s Supper on Holy Thursday at the Cathedral Basilica of SS. Peter and Paul, where in addition to some 15,000 livestream and American Sign Language viewers, he joined some 300 in-person faithful – including his predecessor, retired Archbishop Charles Chaput.

“It is a great joy for me personally and for all of us to welcome Archbishop Chaput back to the Cathedral,” said Archbishop Pérez, noting that the appearance was Archbishop Chaput’s first at the basilica since the Feb. 18 Mass at which his successor was installed.

Beginning on the evening of Holy Thursday, the Triduum (from the Latin for “three days”) marks the summit of the liturgical year. The period – which concludes on the evening of Easter Sunday – forms “one day unfolding for us the unity of Christ’s Paschal Mystery,” according to the U.S. bishops.

Earlier on Holy Thursday, Archbishop Pérez celebrated the Chrism Mass, at which he blessed the holy oils of catechumens, the sick and chrism for use in the celebration of the sacraments at archdiocesan parishes during the coming year.

At the same liturgy (which due to COVID restrictions was not open to the public), priests renewed their ordination promises, and the archbishop encouraged faithful to “congratulate them on their feast day today.”

The Mass of the Lord’s Supper “takes us right back to that upper room where Jesus gathered for the last time with his Apostles for a Passover meal,” said Archbishop Pérez.

The word “paschal” itself is derived from the Hebrew word for Passover, Pesach.

That final Passover meal was Christ’s “hour,” something “the Gospel of John speaks a lot about,” Archbishop Pérez said.

“The hour wasn’t just a moment of time: it was the hour of … the eruption of grace in time, the redemptive act of God through Christ,” he said. “It was the hour in which he would be revealed, (when) he would be glorified in perfection, completion.”

However, the Apostles were not entirely aligned with the divine schedule, the archbishop added.

“They never really got it,” he said. “Throughout most of (Jesus’) public ministry, they were just … kind of off all the time….We really would not have hired any one of them today.”

Peter in particular “sticks his foot in his mouth” by initially refusing Jesus’ washing of the disciples’ feet and by his denial of Christ on Good Friday, said Archbishop Pérez.

The remaining Apostles “weren’t any better,” since they used the same feet Jesus washed to “run to the hills later on,” he said.

Yet that inadequacy can also be “a great source of consolation” for modern faithful, he added, since “we’re always a little bit off” in comprehending the mystery of God’s saving love.

The archbishop added that tradition holds John was “the beloved disciple” referenced in the Gospel of the same name, the lone Apostle who “stuck around.”

At the same time, said Archbishop Pérez, Scripture “never actually names the beloved disciple,” who could be “those who stayed,” or “anyone who stays in moments of ‘cross,’ in suffering, in difficulty.”

The optional Holy Thursday Mandatum, or washing of the feet, was not performed at the April 2 Mass due to pandemic precautions, but the Gospel account bears reflection, since it serves as “an incredible act of humility,” said Archbishop Pérez.

He quoted a 2014 homily by Pope Francis, who described such condescension as “an act of the tenderness of God.”

“This sign is the humility of God taken to the extreme,” said the pope at the time. “It is the love with which … he assumed our frailty, our sufferings, our anxieties, our desires and our limitations.”

God “looks upon us with eyes full of love” and “accepts our poverty,” said Pope Francis, since he “is in love with our smallness.”

Although he had to leave his Apostles to fulfill his mission at Calvary, Jesus found “a powerful sign, a simple sign, a tender sign of his love to leave in our midst,” said Archbishop Pérez.

“That sign was the Eucharist … simple and fragile … and powerfully transforming,” he said.