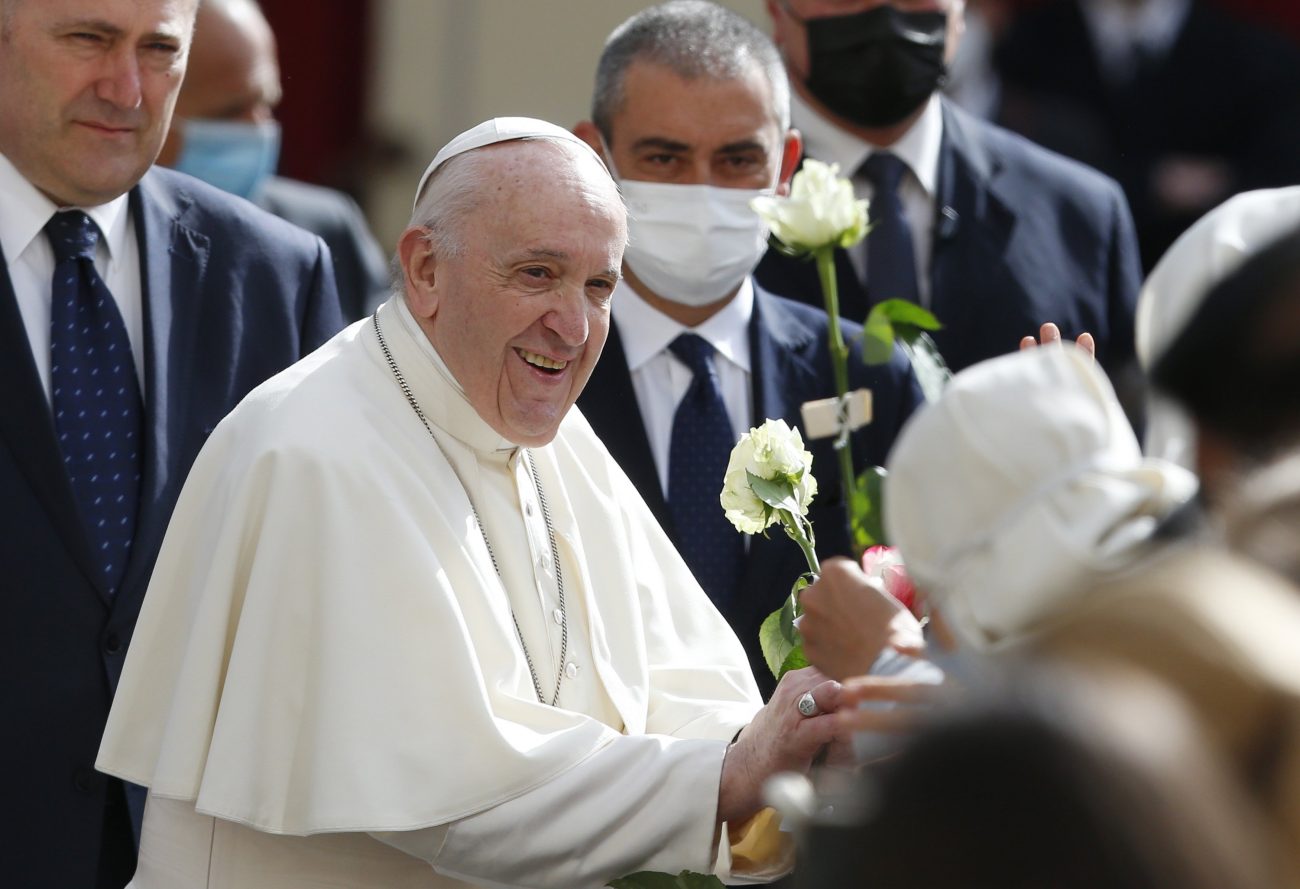 Pope Francis receives flowers during his weekly general audience in the San Damaso Courtyard of the Apostolic Palace at the Vatican May 12, 2021. It was the first time in more than six months that visitors and pilgrims have been able to attend the audience. (CNS photo/Paul Haring)

VATICAN CITY (CNS) — Holding a general audience with visitors and pilgrims present for the first time in more than six months, Pope Francis said he was very pleased to see people “face to face.”

“I’ll tell you something: it’s not nice to talk in front of nothing, just a camera. It’s not nice,” the pope told about 300 people who attended the audience May 12 in the San Damaso Courtyard of the Apostolic Palace.

Because of the ongoing COVID-19 pandemic, the last general audience open to the public was Oct. 28. After that, the pope returned to livestreaming the audience from the library of the Apostolic Palace.

Greeting Polish speakers at the audience, the pope noted that May 13, the feast of Our Lady of Fatima, marked the 40th anniversary of the attempt to assassinate St. John Paul II.

The Polish pope, who was riding in the popemobile at the start of a weekly general audience when he was shot by Mehmet Ali Agca in 1981, was convinced “that he owed his life to Our Lady of Fatima,” Pope Francis said. “This event makes us aware that our lives and the history of the world are in the hands of God.”

In his main audience talk, Pope Francis focused on overcoming obstacles to prayer, but also on the power of prayer. 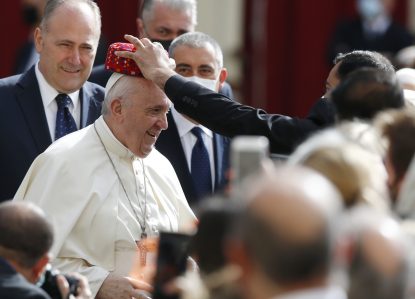 A man places a hat on Pope Francis during his weekly general audience in the San Damaso Courtyard of the Apostolic Palace at the Vatican May 12, 2021. It was the first time in more than six months that visitors and pilgrims have been able to attend the audience. (CNS photo/Paul Haring)

Prayer, he told the crowd, is not always “a walk in the park.”

While it may be easy to “parrot” prayer, “blah, blah, blah,” he said, real prayer requires effort.

Prayer “certainly gives great peace, but through inner struggle, at times hard, which can accompany even long periods of life,” he said.

Often when a person wants to pray, he said, “we are immediately reminded of many other activities, which at that moment seem more important and more urgent. This happens to me, too; ‘I’m going to go pray. But no, I have to do this and that.’ We run from prayer; I don’t know why, but that’s how it is.”

But “almost always, after putting off prayer, we realize that those things were not essential at all, and that we may have wasted time” on things that were not as important as prayer, he said. “This is how the Enemy deceives us.”

Pope Francis told the story of a man he knew in Buenos Aires, Argentina, “my other diocese,” who was told that his 9-year-old daughter was sick, and the doctors were convinced she was about to die. The man took a train to the Basilica of Our Lady of Luján and prayed outside all night, “fighting for the health of his daughter.”

When he got back to the hospital, he found his wife smiling because their daughter suddenly improved, the pope said.

“I saw this myself,” Pope Francis said. “Prayer works miracles because prayer goes straight to the center of the tenderness of God who loves us like a father. And when he does not give us the grace” of what was asked for in prayer, “he gives us another, which we will see over time.”

NEXT: Reform aims to carry Gospel mission forward, not clean up past, pope says