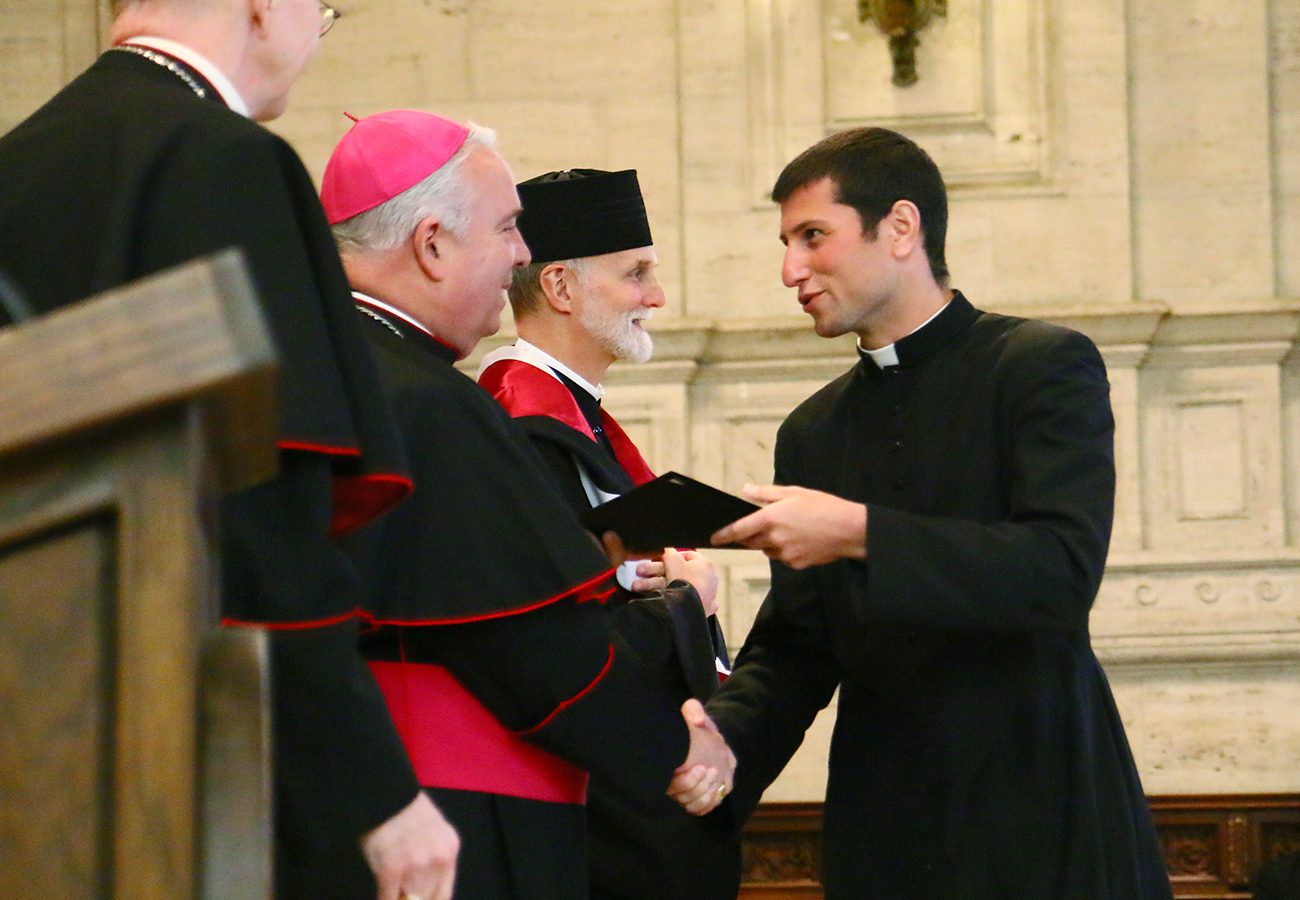 Receiving his Master of Divinity degree from St. Charles Borromeo Seminary from Archbishop Nelson Perez is Christopher Massaro of the Archdiocese of Philadelphia. Ukrainian Catholic Metropolitan Archbishop Borys Gudziak, who received an hononary degree from the seminary, is shown at center. (Photo by Sarah Webb)

The rigors of learning and the laughter and fellowship of seminarians at St. Charles Borromeo Seminary are the stuff of sacred memory, which future priests may rely upon in the years ahead, said Ukrainian Metropolitan Archbishop Borys Gudziak May 12 at the seminary’s annual Concursus ceremony.

It marked the close of the academic year and the occasion for the seminary’s board of trustees to award an honorary degree to the archbishop, who heads the Ukrainian Catholic Archeparchy of Philadelphia and is the spiritual leader of Ukrainian Catholics in the United States.

(See a photo gallery of the Concursus ceremony here, plus photos from the seminary’s baccalaureate Mass here.)

In addition to his doctorate of human letters degree, seminary officials and Archbishop Nelson Perez awarded degrees and certificates to 70 students of the seminary in its college and theology divisions, plus the School of Theological Studies.

Saying he was “deeply moved” by receiving the honorary degree and “very inspired by this seminary,” Archbishop Gudziak warned the seminarians against the illusion of self-reliance. Although America celebrates that trait, it is “one of the most dangerous in the spiritual life,” he said.

“American responsibility is a great thing, and I hope that we can all grow in it as citizens and as a nation. But dear brothers, we can’t make it alone. The Son of God in the Gospel of John emphasizes his constant reference to the Father.

“Don’t be alone,” the archbishop said. “Don’t be heroic. And most of all don’t commit heroic suicide. Be with God. Be referential, relational and foster what you have here in this community: a fellowship with a budding future presbyterate.”

That fellowship, in which a priest can “share (his) weaknesses, and laugh, have a good meal” among priest friends is essential now in seminary formation and afterwards in priestly ministry, he advised. 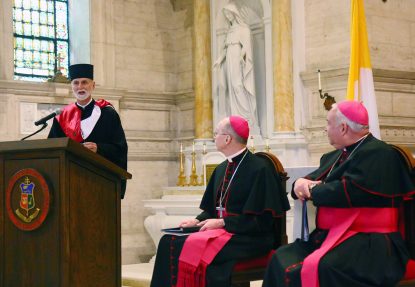 Metropolitan Archbishop Borys Gudziak of the Ukrainian Catholic Archeparchy of Philadelphia, addresses the St. Charles Seminary community at the annual Concursus ceremony May 12, marking the end of the academic year. Looking on are Bishop Timothy Senior, rector of the seminary, and Archbishop Nelson Perez. (Sarah Webb)

But with the authority that ordination brings, Archbishop Gudziak cautioned against seeing oneself as part of a privileged class. Priests should rely on their fellowship and place themselves under the authority of a wise spiritual director.

“If a spiritual director will protect you from personal illusions in your prayer life, in your interactions (of ministry) the illusion of privilege will be removed every time you touch the poor, every time you go to the margins, every time you bring those who are outside in to the center,” he said.

“Keep your eyes open. Fill your heart with gratitude. Foster a sacred memory of these gifts and you will have nothing to fear. Your holiness, your wholeness in Christ, your fellowship, will shine and take away the fear of this fear-struck culture. The future is yours. You are part of the body of Christ. It is a journey, and you will lead many on this pilgrimage of our life in the Lord.”

After the conferral of degrees, Archbishop Perez followed with remarks that underscored a time of transition at St. Charles Seminary.

Some seminarians are looking toward the next stage of their formation, some are moving on from the seminary to discern God’s will for their lives, and two – Fathers Kenneth Cavara and Mark Tobin – are embarking on a major transition as new priests.

While St. Charles is celebrating its 150th year on its Overbrook campus, that time is nearing its end. By 2024, the seminary will move its programs to a new site in Gwynedd Valley, Montgomery County, adjacent to Gwynedd Mercy University. It will be the sixth transition to a new location in the seminary’s 189 years in existence, from sites in Philadelphia to Delaware County to Wynnewood.

St. Charles “now is on the threshold of another historic shift,” Archbishop Perez said. “God in his providence has made you a part of it. You will be either a blessing and a facilitator for that process, or an obstacle. We each choose, what combination are we going to be.”

In addition to special awards for seminarians — including the CatholicPhilly.com award for communications, which was given to Dominic Mirenda of the Archdiocese of Philadelphia — the following men and the dioceses or religious orders for which they are studying received the Bachelor of Arts degree in philosophy: 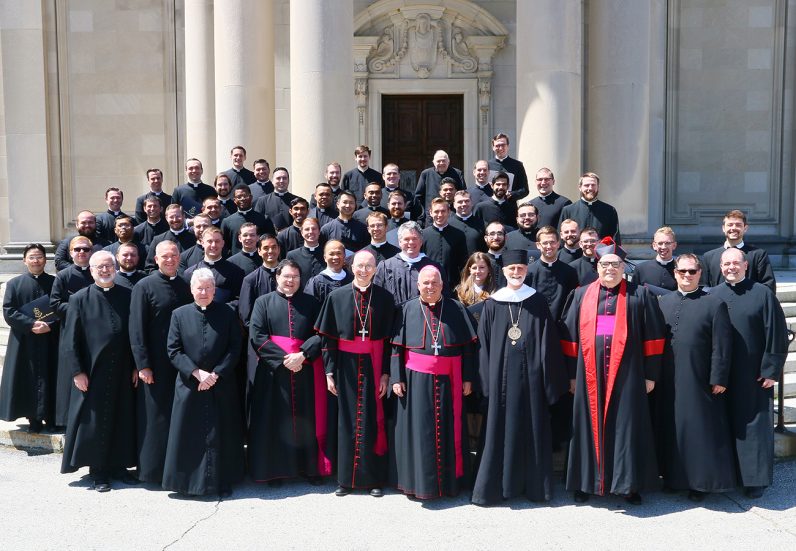 NEXT: Kindergarten teacher, dog point the way to kindness with kids’ book