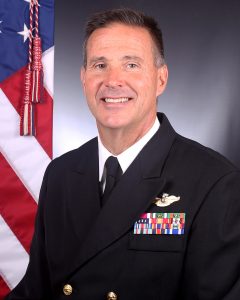 As the nation marks Memorial Day, prayer and gratitude are two ways in which Catholics can best honor veterans, said a bishop and decorated military chaplain.

“You might want to go to Mass that day and pray for them,” said Auxiliary Bishop Joseph Coffey, Vicar for Veterans Affairs in the U.S.’s Archdiocese for the Military Services. “And if you see any veterans, thank them for their service.”

Established just after the Civil War, Memorial Day (once known as “Decoration Day”) was eventually expanded to pay tribute to those who died in all American wars. Declared a federal holiday in 1971, the observance has also come to be regarded as the kickoff to the summer season – and the day’s significance “does probably get a bit lost” amid the backyard barbecues and retail sales promotions, said Bishop Coffey.

Yet it remains an important way to affirm those in the military, he said, since they model Christ’s sacrificial love, even if they do not lay down their lives on the battlefield.

“I think every time someone volunteers to serve their country in uniform, that serving is somewhat of a dying to self,” said Bishop Coffey. “And some pay the ultimate price.”

Having logged 19 years of active duty as a Catholic military chaplain, Bishop Coffey – a graduate of La Salle University and St. Charles Borromeo Seminary – knows well the challenges faced by those in the armed forces. Family separation, job stress and the danger of active combat take a steep toll on personnel, and COVID has intensified such hardships, he noted.

Under pandemic restrictions that have prevented regular port dockings for maritime military, “the past year has been particularly difficult,” said Bishop Coffey. “Some of our ships have been out at sea for months on end.”

The bishop, who completed three tours of duty on aircraft carriers, said that in such situations, “if a priest is available for Mass, it’s a big deal.”

With a presence at more than 220 installations in 29 countries, 153 Veterans Administration medical centers, and federal sites in 134 nations, the Archdiocese for the Military Services – established by St. John Paul II in 1985 — is “literally the largest archdiocese in the world, geographically speaking,” said Bishop Coffey.

Under Archbishop Timothy Broglio and four auxiliary bishops (including Bishop Coffey), the archdiocese is responsible for more than 1.8 million men, women and children, and serves as the sole endorser of Roman Catholic chaplains to the U.S. government.

At the same time, the Washington, D.C.-based archdiocese receives no federal monies, and the chapels in which it exercises its ministry are U.S. government property. All funding for its mission derives from donations.

While it teaches that war is to be vigorously avoided, the Catholic Church holds that “governments cannot be denied the right of lawful self-defense, once all peace efforts have failed” (Gaudium et Spes, 79).

As a result, “the military profession is honorable,” said Bishop Coffey.

“I say that in boot camps to many, many recruits,” he said. “We do need a military, because we live in a broken world. As General (Douglas) MacArthur said, ‘The soldier above all other people prays for peace, for he must suffer and bear the deepest wounds and scars of war.’”

For more information on the Archdiocese of the Military Services, USA and to support its work, visit its website.

PREVIOUS: Students take on the world’s problems, with empathy

NEXT: Seniors served by archdiocese say they’re ‘more viable and active’ than ever