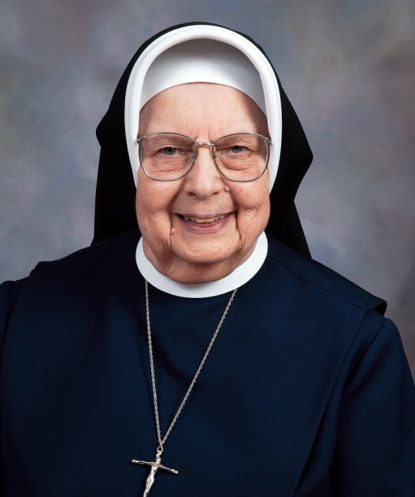 Sister Maria Clemens Baronett, I.H.M., died April 28 in Camilla Hall, Immaculata at age 92. She was in the 75th year of her religious life.

Catherine Baronett was the daughter of the late Louis and Ethel (McDonald) Baronett of  St. John the Baptist Parish in Philadelphia’s Manayunk section. She attended the parish’s grade school and high school, then entered the Sisters, Servants of the Immaculate Heart of Mary in 1946.

In 1947 she received her habit and religious name, Sister Maria Clemens. Two years later she pronounced her first vows and began teaching first graders at St. Martin of Tours School, Philadelphia, where she remained until 1952.

In the fall of 1979, Sister Maria Clemens’ ministry shifted to assisting at Camilla Hall, the I.H.M. convent home for elderly sisters, for one year.

In 1980 she went to St. Monica Convent in Philadelphia to serve children in the parish’s Day Care Center until 1999.

At that time Sister Maria Clemens joined the Apostolate of Prayer Community at Camilla Hall, where she served until her death.

In addition to her I.H.M. community, she is survived by her sisters Phil (John, deceased), Frances Jeffreys (Michael, deceased), her brother John (Muriel, deceased) and her nieces, nephews, grandnieces and grandnephews. She is predeceased by her parents and her brother Louis Baronett.

Msgr. Joseph C. Dieckhaus was the main celebrant and homilist for the funeral Mass May 4. Father Joseph Kelley concelebrated and Deacon Leonard de Masi served at the altar.