Eucharist is bread of sinners, not reward of saints, pope says 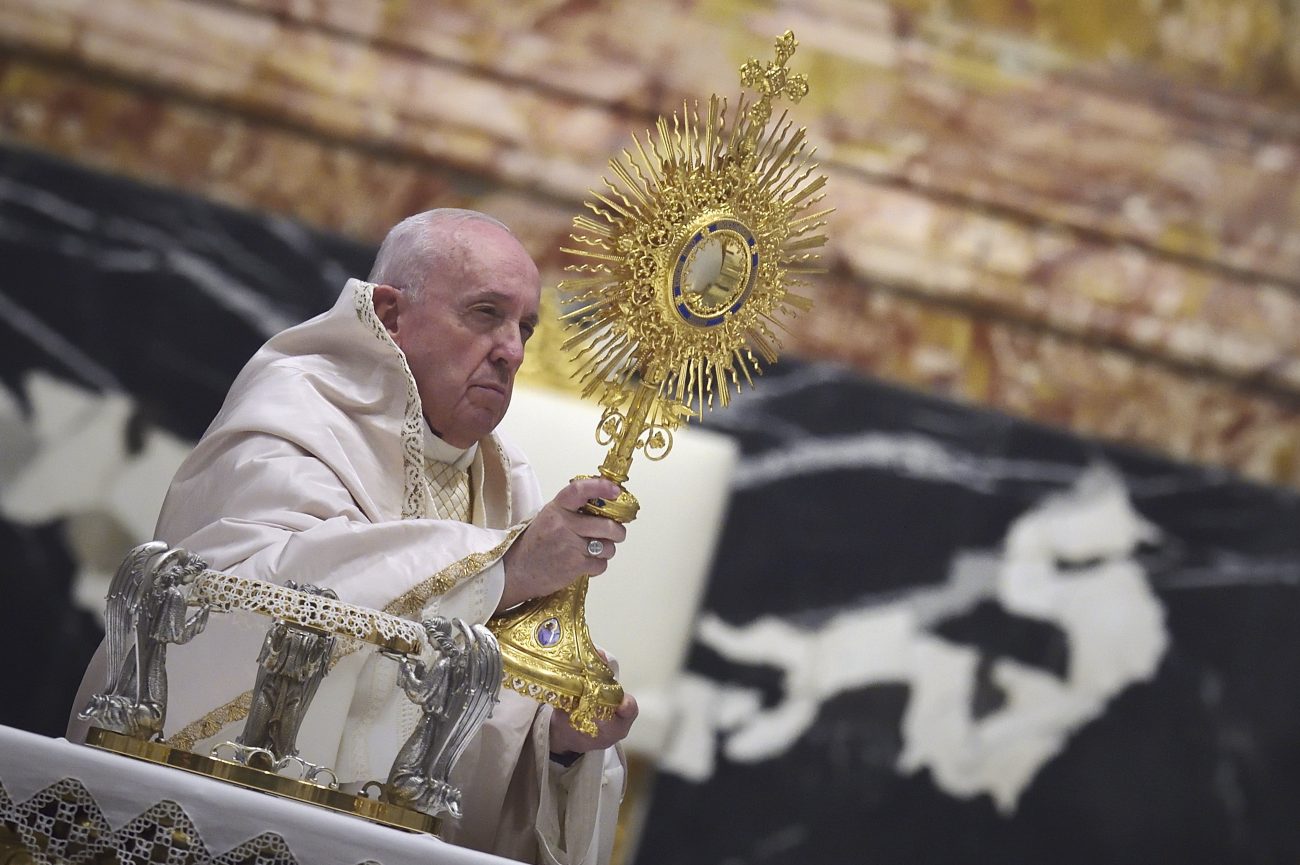 Pope Francis leads Benediction of the Eucharist during Mass on the feast of Corpus Christi in St. Peter's Basilica at the Vatican June 6, 2021. (CNS photo/Stefano Spaziani, pool)

VATICAN CITY (CNS) — People’s hearts and the entire church must be wide open to wonder and devotion to Christ and ready to embrace everyone — sinner and saint alike, Pope Francis said.

“The church of the perfect and pure is a room where there isn’t a place for anyone; the church with open doors that celebrates around Christ is, on the other hand, a large hall where everyone — the righteous and sinners — can enter,” the pope said in his homily during Mass June 6, to mark the feast of the Body and Blood of Christ.

“The Eucharist is meant to nourish those who are tired and hungry along the journey, let’s not forget this!” he said during the early evening Mass, which was celebrated at the Altar of the Chair in St. Peter’s Basilica with about 200 people, who wore masks and maintained social distance.

It was the second year the Mass was held with a reduced congregation and without the traditional outdoor Corpus Christi procession afterward as part of the ongoing efforts to contain the spread of the coronavirus.

The ceremony instead concluded with a long moment of silent eucharistic adoration and Benediction of the Blessed Sacrament. The feast of the Body and Blood of Christ celebrates the real presence of Christ in the Eucharist.

In his homily, Pope Francis looked at the meaning of the images presented in the reading from the Gospel of St. Mark which detailed Jesus’ instructions for preparing and finding a place for Passover and the Lord’s Supper.

Pope Francis said the image of a man carrying a jar of water reminds people that humanity is thirsty, “always seeking a source of water that satisfies and restores.”

“All of us journey through life with a jar in our hands” as “each one of us is thirsty for love, joy, a successful life in a more humane world,” he said, adding that only God can satisfy that real thirst for something more — that hope in an eternal life that sustains people in life.

Because that thirst is often not acknowledged, with fewer people seeking or asking about God, Christians must evangelize, the pope said.

It is not enough for the church to be a small group “of the usual people who gather to celebrate the Eucharist. We have to go into the city, encounter people, learn to recognize and reawaken the thirst for God and yearning for the Gospel,” he said. It will be that renewed thirst that brings people to the altar to encounter God in the Eucharist, he added.

The other important image is the grand upper room they find for the Passover meal, he said, a meal that will be significant because of a tiny morsel of bread.

“God makes himself small like a piece of bread,” so humble, hidden and sometimes invisible, that it is necessary that one’s heart be large, open and vigilant to recognize, welcome and adore him, the pope said.

“Instead, if our heart is less like a large room and more like storage closet where we regretfully keep old things, like an attic where we have long stored away our enthusiasm and dreams, like a cramped and dark room where we live alone, with ourselves, our problems and bitterness,” he said, “then it will be impossible to recognize this silent and humble presence of God.”

The church also must be a large, welcoming space, “not a small exclusive club, but a community with its arms wide open, welcoming to everyone,” and willing to lead to Christ the wounded, the wayward and those who have done wrong, he said.

Earlier in the day, the pope greeted hundreds of people spread out in St. Peter’s Square for the noon recitation of the Angelus prayer.

The Eucharist, he said, shows “the strength to love those who make mistakes” because Jesus gave the world the bread of life on the night he was betrayed.

Jesus reacts to the evil of Judas’ betrayal with a greater good, responding to Judas’ “no” with the “yes” of mercy, he said. “He does not punish the sinner, but rather gives his life for him, he pays for him.”

“When we receive the Eucharist, Jesus does the same with us: he knows us; he knows we are sinners; he knows we make many mistakes, but he does not give up on joining his life to ours,” the pope said. “He knows that we need it, because the Eucharist is not the reward of saints, but the bread of sinners. This is why he exhorts us: ‘Do not be afraid! Take and eat.'”

NEXT: Path to Jesus winds through a strawberry patch