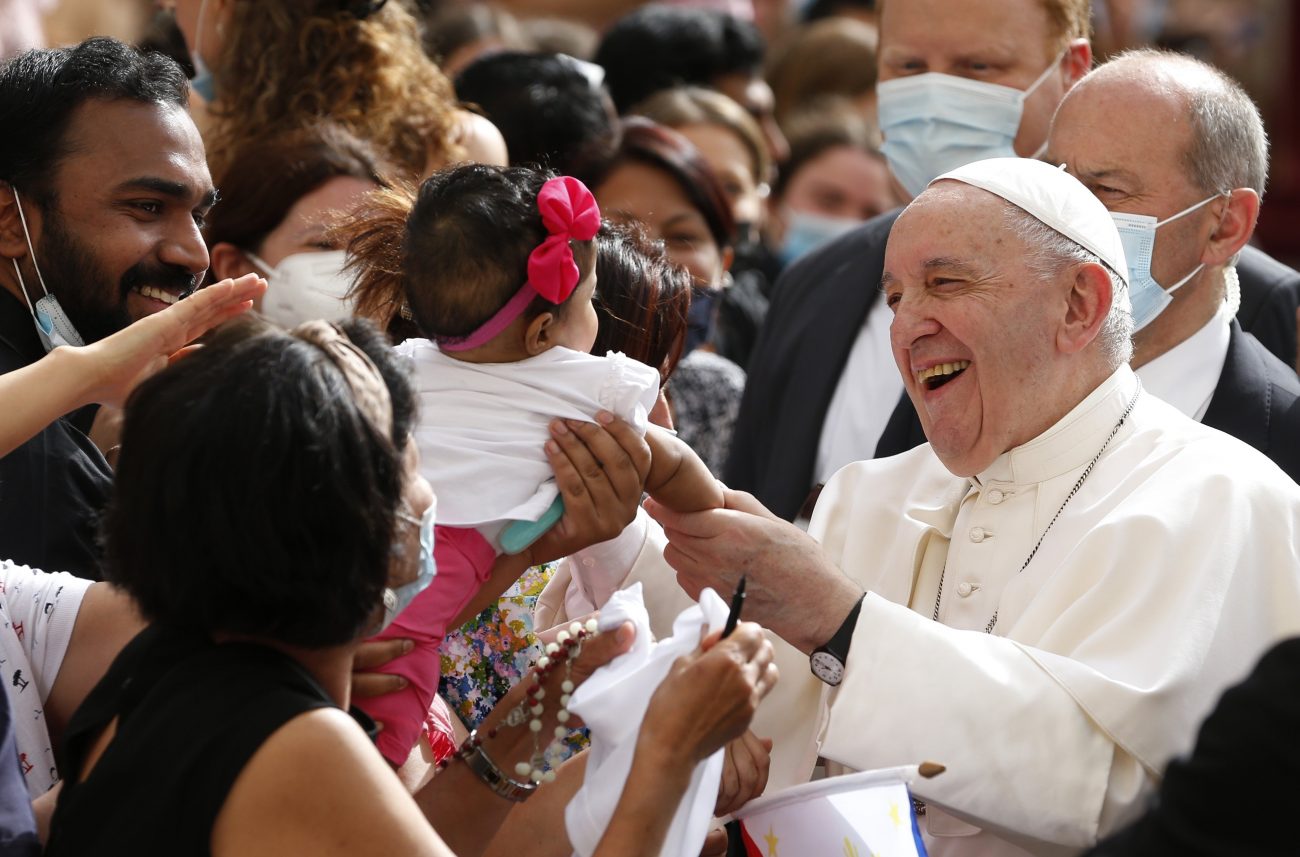 Pope Francis greets a baby during his general audience in the San Damaso Courtyard of the Apostolic Palace at the Vatican June 23, 2021. The pope began a new series of audience talks focused on St. Paul's Letter to the Galatians and its lessons about evangelization, faith and freedom. (CNS photo/Paul Haring)

VATICAN CITY (CNS) — Those who proclaim the Gospel of Jesus Christ are humble and trust in God, they do not heap conditions upon others or promote themselves as the only “keepers of the truth,” Pope Francis said.

The path of evangelization, the essential characteristics of an evangelist and the risks posed by the self-proclaimed righteous are illustrated in the Letter to the Galatians, the pope said June 23 as he announced the letter would be the topic of a new series of talks at his weekly general audience.

Spider-Man — known as Mattia Villardita when he is not working, according to Vatican News — was among the hundreds of pilgrims and visitors in the San Damaso Courtyard of the Apostolic Palace for the papal audience. After the gathering, Pope Francis spent a few minutes speaking with Villardita, who dresses up in superhero costumes and visits children in hospitals.

In his main audience talk, Pope Francis said St. Paul’s Letter to the Galatians is important, “I would even say decisive, not only for getting to know the apostle better, but above all in considering some topics that he addresses in depth, showing the beauty of the Gospel.”

The themes of “freedom, grace and the Christian way of life” in the Letter to the Galatians, he said, are “extremely topical since they touch on many aspects of the life of the church in our days. It is a very relevant letter. It seems written for our times.”

The letter shows St. Paul’s “fiery” concern for the new communities of Christians who were Gentiles but were being pressured by some preachers to adopt Jewish practices such as circumcision. 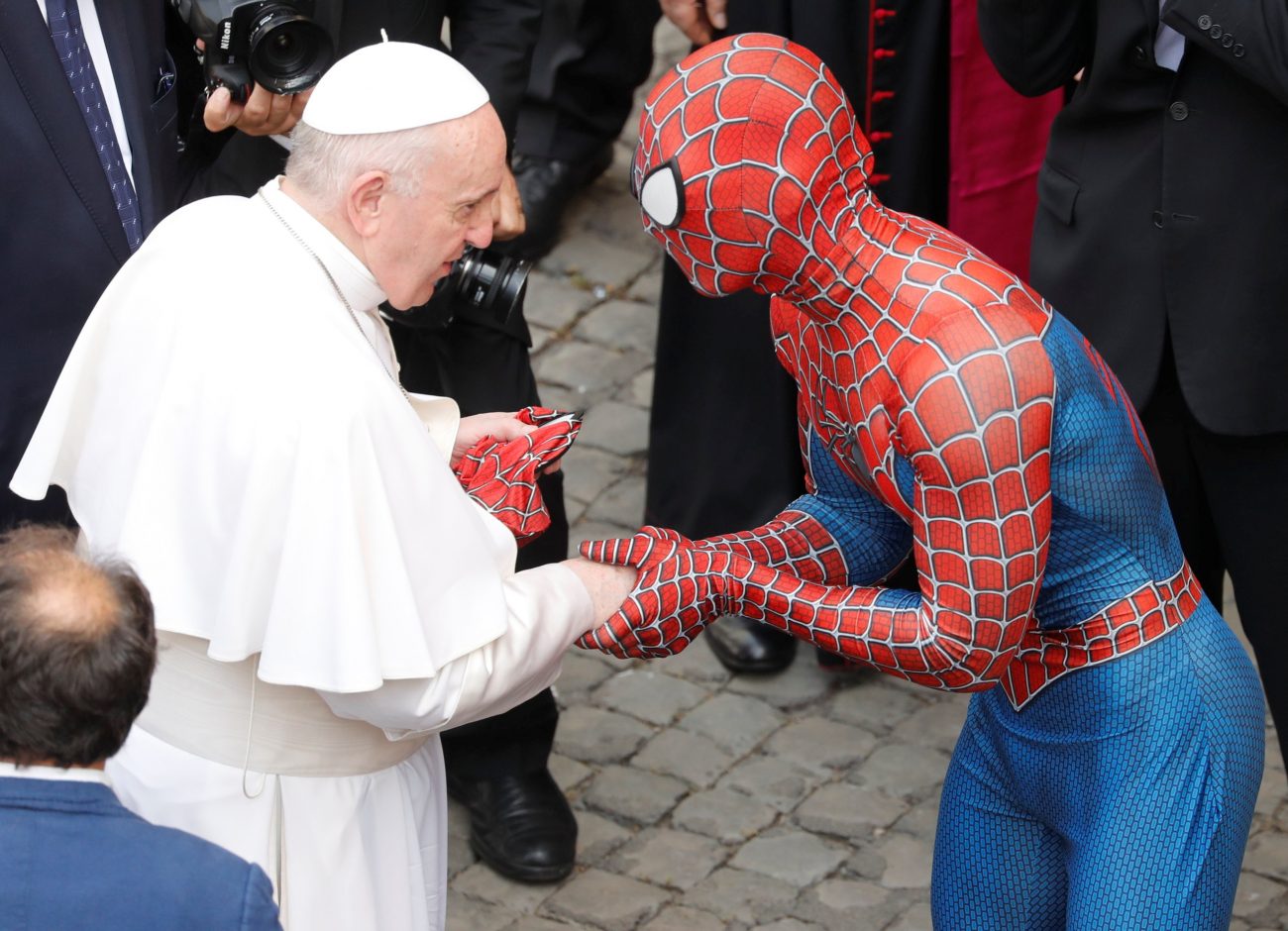 Pope Francis greets Mattia Villardita, 27, from northern Italy, dressed as Spider-Man, during his general audience in the San Damaso Courtyard of the Apostolic Palace at the Vatican June 23, 2021. (CNS photo/Remo Casilli, Reuters)

St. Paul was a pastor, who, “like a father or mother, immediately notices the dangers his children face” as they grow in faith, the pope said.

The preachers not only were insisting on things that St. Paul did not insist upon, but they were “even denigrating his person,” the pope said. “They began with doctrine — ‘this no, this yes’ — and then they denigrated the apostle.”

“As we can see,” the pope said, “it is the ancient practice of presenting themselves on certain occasions as the sole possessors of the truth — the pure ones — and trying to belittle the work of others with slander.”

The new Christians were confused and worried, the pope said.

“This situation is not far removed from the experience of many Christians today,” he said. “Indeed, today too there is no shortage of preachers who, especially through the new means of communication, can disturb the community. They present themselves not primarily to proclaim the Gospel of God who loves humanity in Jesus, crucified and risen, but to insist, as true ‘keepers of the truth’ — that’s what they call themselves — on the best way to be Christians.”

“They strongly affirm that the true Christianity is the one they adhere to, often identified with certain forms of the past, and that the solution to today’s crises is to go back so as not to lose the genuineness of the faith,” the pope said.

“How can we recognize these people?” Pope Francis asked, before answering that one sign is their “rigidity.”

NEXT: Seeing life and death through the eyes of a child