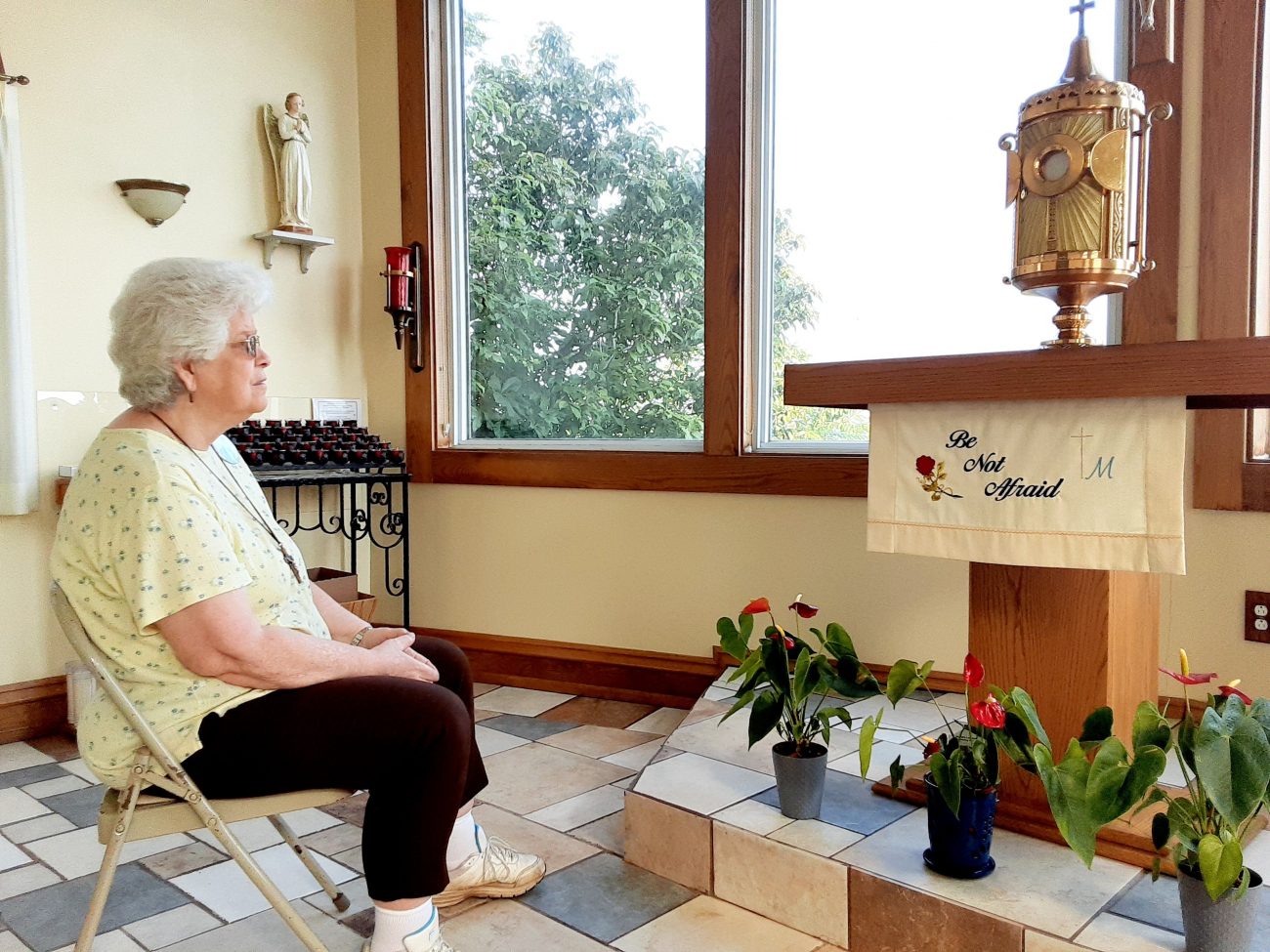 Hilaire Tavenner prays before the Eucharist in the adoration chapel at St. Anthony of Padua Parish in Lorain, Ohio, July 7, 2021. She regularly prays at the chapel to express gratefulness for the good things in her life and to ask Jesus to bring peace to a troubled world. (CNS photo/Dennis Sadowski)

LORAIN, Ohio (CNS) — The summer sun glistens on a calm Lake Erie off the Lorain shoreline, brightening the eucharistic adoration chapel at St. Anthony of Padua Church. It’s where Hilaire Tavenner makes time for at least a few minutes on most days to pray with Jesus.

Once a month, Tavenner leads a rosary marathon at the chapel to end abortion. Other days, she heads to the chapel from her home a few blocks away to offer a prayer of thanksgiving for the good things in her life or for the 3,000 students she taught during the 20 years she was a member of the Sisters of St. Francis of Syracuse, New York.

“I come to give him thanks. I pray for my family, my friends. The way I see the world today I have never seen it before. So I really come with a lot of concerns. I go to him. I can’t fix any problems, but I know who can,” Tavenner, 72, told Catholic News Service at the chapel July 7.

Tavenner finds that being with Jesus, who, as the Catholic Church teaches, is present in the host visible behind glass in a tabernacle located in front of four large windows overlooking the lake, brings comfort.

“I think of him at the Last Supper all the time and he’s blessing the bread,” she said while sitting on one of four metal folding chairs in the chapel, a change necessitated to promote social distancing during the pandemic. “He’s a Jew and he’s having the Passover, but he started a whole new gift to us. It’s not just bread, it’s not just wine. He said, ‘It’s my body and my blood. Take this all of you and eat of it, drink of it.’

“He gave us the sacred bread,” she said.

The presence of Jesus under the appearances of bread and wine, often described as the “real presence,” is a central tenet of Catholicism. The sacrament of the Eucharist, the body and blood of Christ, is the “source and summit of the Christian faith,” as paragraph 1324 of the Catechism of the Catholic Church states.

The belief that in the Eucharist the bread and wine become the body and blood of Jesus was progressively clarified during the first five centuries of the church as Christian leaders discussed and reflected on what Christ said during the Last Supper. 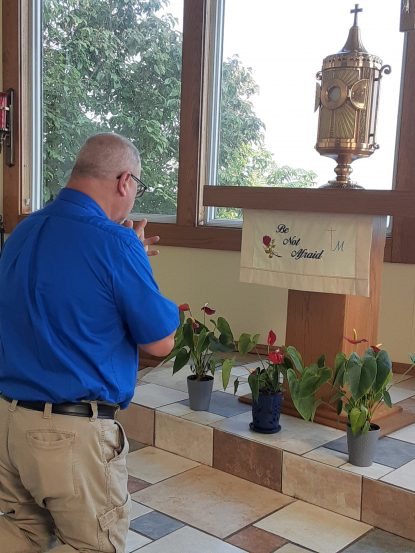 David Zientarski, a hospice nurse, prays before the Eucharist in the adoration chapel at St. Anthony of Padua Parish in Lorain, Ohio, July 7, 2021. He said his daily visits on the way to see clients nourishes his soul and gives him the strength to handle any difficulties he may face. (CNS photo/Dennis Sadowski)

Timothy O’Malley, director of education at the McGrath Institute for Church Life at the University of Notre Dame, addresses the development of church teaching related to the real presence of Jesus Christ in the sacrament of the Eucharist in his recently published book, “Real Presence: What Does It Mean and Why Does It Matter?”

The book reviews the works of St. Augustine, St. Thomas Aquinas and others regarding the Eucharist and how the 2,000-year-old mystery of the sacrament transcends time through the worship practices of generations of faithful people.

O’Malley told CNS the book evolved in part from a 2019 Pew Research study that found 69% of self-identified Catholics said they believed the bread and wine used at Mass are not the real presence of Jesus, but instead “symbols of the body and blood” of Christ.

The study’s finding is one of the factors that led the U.S. Conference of Catholic Bishops to focus work over the next three years on catechesis on the Eucharist.

One part focuses on a National Eucharistic Revival initiative spreading across parishes. A second step involves drafting a teaching document on the Eucharist by its Committee on Doctrine. The bishops approved drafting the document after a long debate during their spring general assembly in June.

Critiques by numerous observers have described the questions posed in the Pew study as poorly phrased and misleading. O’Malley said that, in any event, there remains a need among Massgoers for a better understanding of the Eucharist.

Whether it is because of tradition or another reason, many “people don’t understand why they go to Mass,” he said.

O’Malley’s book examines the development in theology surrounding the Eucharist over centuries that led to the doctrine of the real presence and the doctrine of transubstantiation — that bread and wine become Christ’s body and blood.

“Transubstantiation,” O’Malley wrote, meanwhile, “is the explanation of the doctrine of Real Presence employing the word ‘substance.’ The bread and wine have changed their substance — what they fundamentally are. They look, taste, smell, feel like and even sound like bread and wine.

“But through the words of Jesus Christ and the power of the Holy Spirit, and through the instrument of the ordained minister’s words, the substance of ‘this’ bread and ‘this’ wine are transformed,” he continued. “At the level of substance, there is no more bread. There is no more wine. Rather, the Eucharist is the total and real presence of Jesus Christ, given to the church in what looks and tastes like bread and wine.

“The species or appearance — that is, the accidents of the bread and wine — remain available to our senses, maintained only by a miracle.”

While the doctrine is not complicated, O’Malley acknowledged to CNS that it is difficult to understand the mystery of how Jesus becomes present through the transformation of the bread and wine consecrated at Mass.

The doctrine, he explained, describes how Jesus feeds the faithful with his presence in the form of bread and wine. From that spiritual food can the various ministries and actions of the church flow, he added.

It is the mystery that guides Susan Winters, a member of St. Lambert Parish in Sioux Falls, South Dakota, to weekly prayer before the Eucharist. Beginning at 9 a.m. Thursdays and continuing until Mass at 8:30 the next morning, parishioners — usually in pairs for an hour — maintain an around-the-clock vigil with the Eucharist.

Winters said she feels nourished when she connects with Christ in the quiet setting in a separate chapel in the back of the church.

“It gives me the most peace and direction as far as following the Lord,” Winters, who has joined the vigils for about 15 years, told CNS. “You can just really feel the solitude there of Jesus being present. It you’re silent long enough you can allow him to speak to you. There’s just a guidance I can’t explain.”

Dominican Father Reginald Lynch, a member of the Pontifical Faculty of the Immaculate Conception at the Dominican House of Studies in Washington, attributes such an experience to Jesus’ “life-giving grace” that extends through the Eucharist.

He described the Real Presence as more than “a speculative curiosity for philosophers” and is “something that has implications for personal holiness.”

Being near Christ in the tabernacle or in adoration is “an excellent way to grow in our own appreciation for Christ’s presence in the Eucharist,” Father Lynch added. “Contemplating the mystery of the Eucharist can help each of us to grow in our relationship with God.”

Further, he said, “It’s really important for people to have a practical connection with the Eucharist that is devotional and meaningful and clearly connected to a doctrinal appreciation of the faith.”

At St. Anthony Church, Dave Zientarski, a registered nurse with Hospice of the Western Reserve, has made such a practical connection. He starts his workday with a visit to the adoration chapel. He lights a candle and then kneels before the tabernacle silently offering an Our Father, a Hail Mary and the Prayer to St. Francis.

“I’ve said the Prayer of St. Francis every day since I was 19,” said Zientarski, now 50. “I feel if I say it in front of the Eucharist, it gives me strength when something really difficult occurs. I just draw strength from it.”

He keeps the daily visits short, just long enough to feel comfortable that he is in Christ’s presence.

PREVIOUS: Christian world view: Trust in God and his love for everyone

NEXT: A love that makes the miles melt