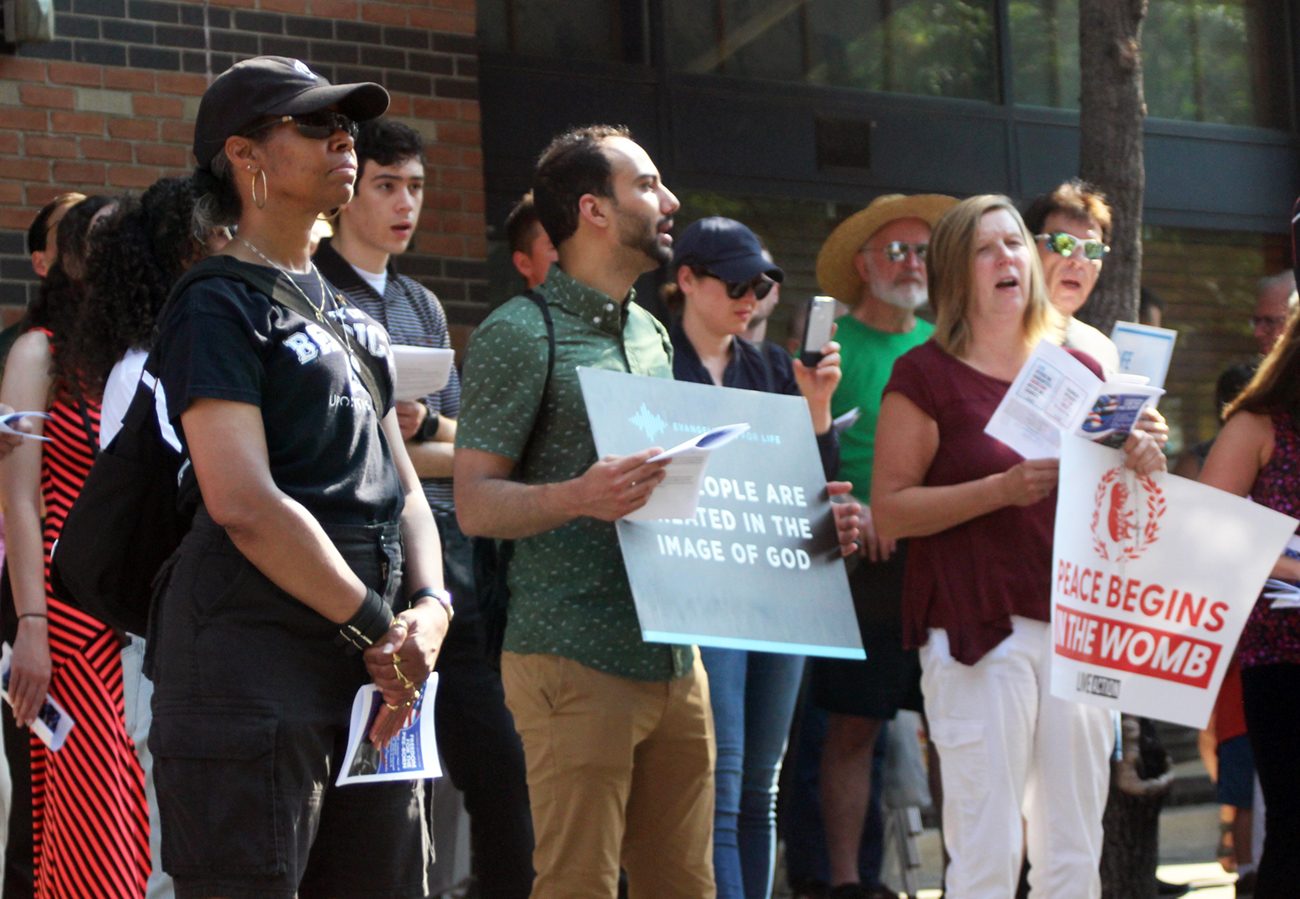 Participants stand before a downtown Philadelphia Planned Parenthood clinic during a July 17 rally and prayer vigil sponsored by the Pro-Life Union of Greater Philadelphia. (Gina Christian)

Ending abortion will require “prayer, personal conversion and good works,” along with a renewed focus on freedom and the sacrifice it entails, say area pro-life leaders.

Some 200 attendees gathered July 17 for the Pro-Life Union of Greater Philadelphia’s “Freedom for the Pre-Born” rally, which began with Mass at the Cathedral Basilica of SS. Peter and Paul.

(View a photo gallery from the July 17 Mass and rally.)

In his homily, celebrant and Cathedral rector Father Dennis Gill described abortion as “the greatest evil in our day and in any day,” since it represents “a total denial of who God is and what he has done for us in making us, and in giving us the responsibility we have over life.”

He urged those present to “pray in the face of (such) darkness and evil,” and to “stop pretending that what is out there is not dark and evil.”

Such prayer must be “more focused and directed to what is really in front of us,” he stressed, and should be accompanied by “daily personal conversion from sin.”

“We need to live exemplary lives as Christians, and with the help of Mary, the first disciple, to know that it’s possible to individually live how Christ wants us to live,” he said. “This makes our prayer all the more fruitful and powerful.”

Equally essential is an eagerness to do “spontaneous good works” for one another to “show that our conversion is real” and to demonstrate “what God wants for his people,” he said.

Abortion by the numbers 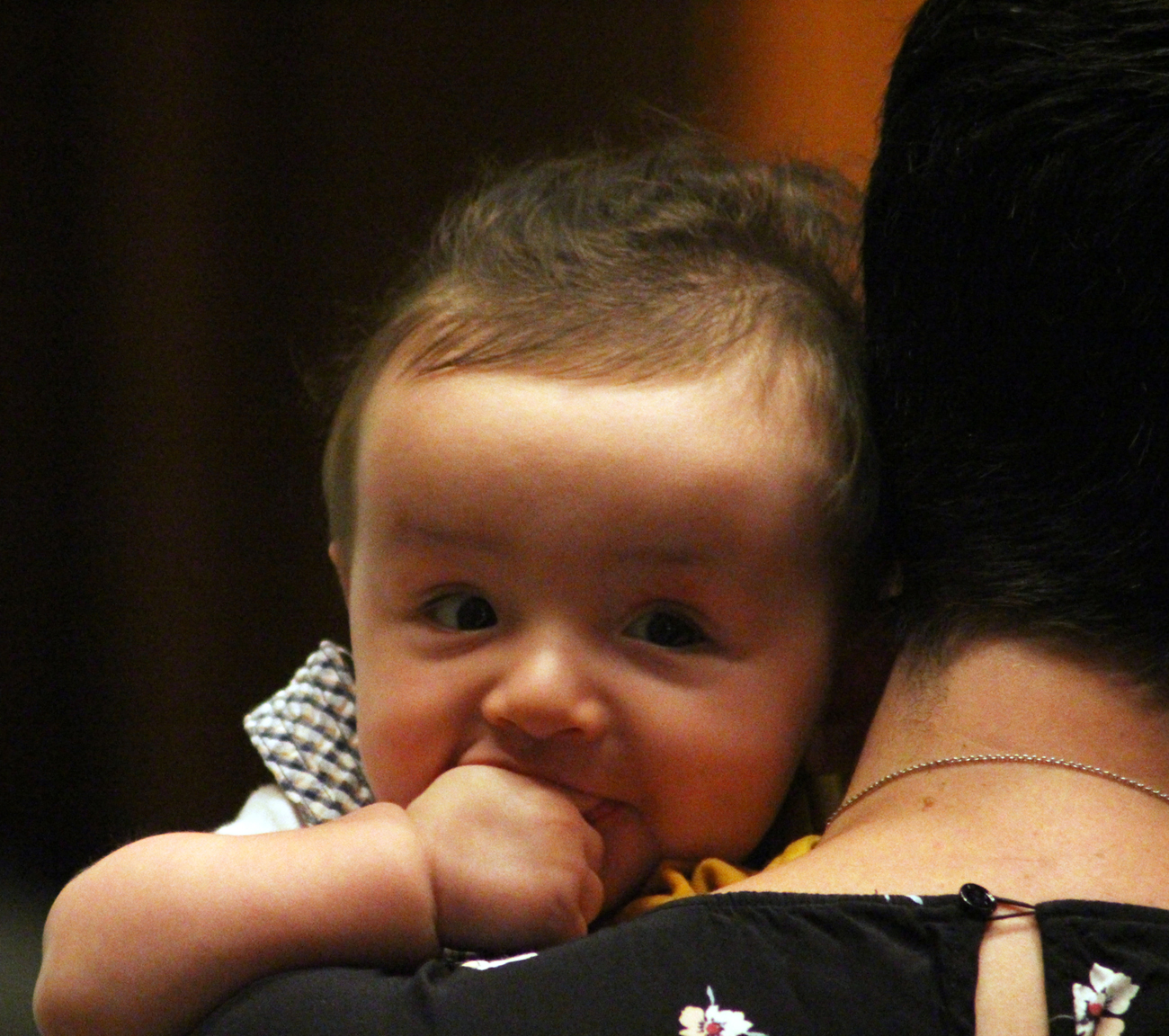 Five-month-old Jude Jozefowski rests on the shoulder of his mother Molly during a July 17 Mass at the Cathedral Basilica of SS. Peter and Paul. The liturgy preceded a prayer walk and rally sponsored by the Pro-Life Union of Greater Philadelphia at a downtown abortion clinic. (Gina Christian)

“Thousands of babies are killed in Philadelphia, and that’s why we’re here, protesting for true freedom,” said Stanton, citing data from Planned Parenthood’s 2019-2020 annual report, which stated the agency performed close to 355,000 abortions overall from 2018 to 2019.

Stanton said taxpayers provided 38% of the agency’s $2 billion in assets, while its adoption referrals were down 38%. A Charlotte Lozier Institute analysis of the Planned Parenthood’s 2019-2020 annual report found the agency reported $1.6 billion in income and over $2 billion in net assets, with taxpayer funding equaling $618.1 million, or almost $1.7 million per day — an annual increase of $1.3 million from the previous year, and a nearly 27% year-over-year increase since 2010.

Planned Parenthood also works with close to 100 partner organizations in what it calls “nine focus countries,” including nations in Africa and Latin America.

Globally, there are a total of some 73.3 million abortions each year, according to the Guttmacher Institute – at least five million more than United Kingdom’s current population, and almost 15 million more than the United Nation’s 2019 crude death rate, or total number of deaths worldwide in a given year. 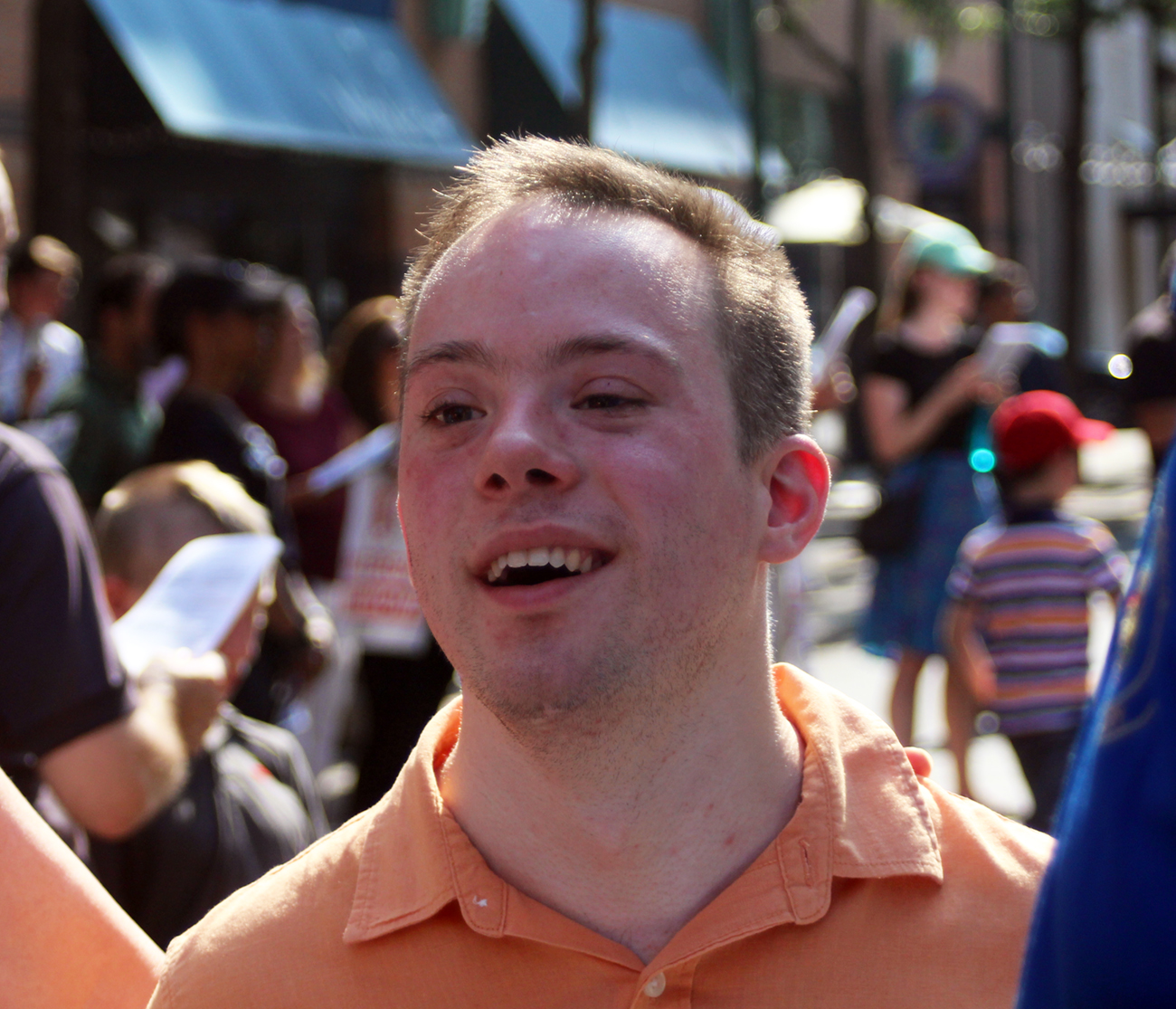 Andrew Santoleri of St. Thomas the Apostle Parish in Glen Mills speaks with fellow attendees at a July 17 rally and prayer vigil sponsored by the Pro-Life Union of Greater Philadelphia in downtown Philadelphia. (Gina Christian)

Former Catholic school teacher and social worker Anthony Farnan, a Pro-Life Union volunteer who spends about 30 hours a week outside of area abortion clinics, said “a lot of people have been indoctrinated” over the past five decades “to think that abortion is “necessary health care.”

During a recent effort to present a clinic client with crisis pregnancy alternatives, Farnan said he was calmly told by the woman’s companion the developing baby was “just a clump of cells.”

Millennials in particular “are being won over by the world’s arguments against life,” said rally attendee Reggie Smith, a nondenominational Christian from Upper Darby.

“They sort of get caught up and trampled, and they end up just going along to get along,” he said.

Even those who profess to be Christian are not immune, said fellow attendee and Presbyterian Christian Hannah Roper of Norristown.

Roper admitted while talking with two Christian girlfriends she was “shocked” to realize she was “the only pro-life one in the room.”

“If I have to talk to (other) Christians and try to convince them that a baby is a human being no matter how small, or what stage it is at, that’s very concerning to me,” she said. “When you’re not paying attention, it seeps into every denomination.”

Hollendonner called “(the) idea that women need abortion in order to be happy and successful” a “lie.”

“This is demeaning to the dignity of women, and it severely underestimates what every single woman is capable of,” she said. “Women are being told that their fertility is a weakness and that abortion is the cure. And with these lies, we are being robbed of our femininity.”

The world’s “many different ideas about what it means to be free … actually lead to the opposite,” said Krajewski.

(Related: Listen to a podcast with Oblate Father Thomas Dailey on the definition of freedom.)

Rather than an expression of liberty, abortion “is a response to a person not feeling free,” said Krajewski, with women in crisis pregnancies “feeling they’re captive to their situation, their past, their boyfriend and ideas about what their future ought to be.”

Saxton called the experience “bondage,” while Dowling urged rally participants to adopt the mindset of abolitionist Harriet Tubman – who personally helped some 300 enslaved persons escape to freedom – and “go back to free those still in bondage, even if they don’t know they’re in bondage.”

Assisting women in crisis pregnancies necessarily requires time, effort and even inconvenience, she said, adding “that’s what we’re here for, to sacrifice our lives to be (Christ’s) hands and feet, no matter what that looks like.”

‘Saves,’ science and a spiritual battle

Over the years, Ruberu and her fellow speakers have assisted in a number of “saves,” where women considering abortions have changed their minds and brought their babies to term.

Stanton said the most recent 40 Days for Life campaign resulted in “over 12,000 babies saved.”

North Philadelphia’s Greater Exodus Baptist Church, the congregation to which Dowling belongs, had a baby shower two weeks earlier for a mother who “turned away from” Planned Parenthood, he said.

“The baby was born yesterday,” Stanton announced as rally attendees applauded. “And we’re standing by her.”

Specific assistance for poor prenatal diagnoses is available through the Lily’s Gift ministry,  a collaboration among CSS, the Office for Persons with Disabilities and the Office for Life and Family.

Roper she’s hopeful such momentum will continue to build in the coming years.

“It’s becoming more obvious on every single level – logical, medical, Christian, scientific – the argument (for life) wins. … The more we’re able to advance medicine, we’re showing that these children can live, no matter what age … so I have nothing but hope that (as) more of this gets out, it will start changing minds.”

Ultimately, though, ending abortion is “a spiritual battle” for which pro-life advocates “need the aid and empowerment of the Holy Spirit, said Saxton – and the intercession of Mary, said Chris Lane of St. Isaac Jogues Parish in Wayne.

Along with Jim Schneller of St. Mary Quasi-Parish in Conshohocken, Lane carried a six-foot-high framed banner of Our Lady of Guadalupe during the walk and rally “to show we trust in her.”

“She is patroness of the Americas, our Blessed Mother, and she gave birth to Jesus,” he said. “She is definitely a leader in the pro-life movement.” 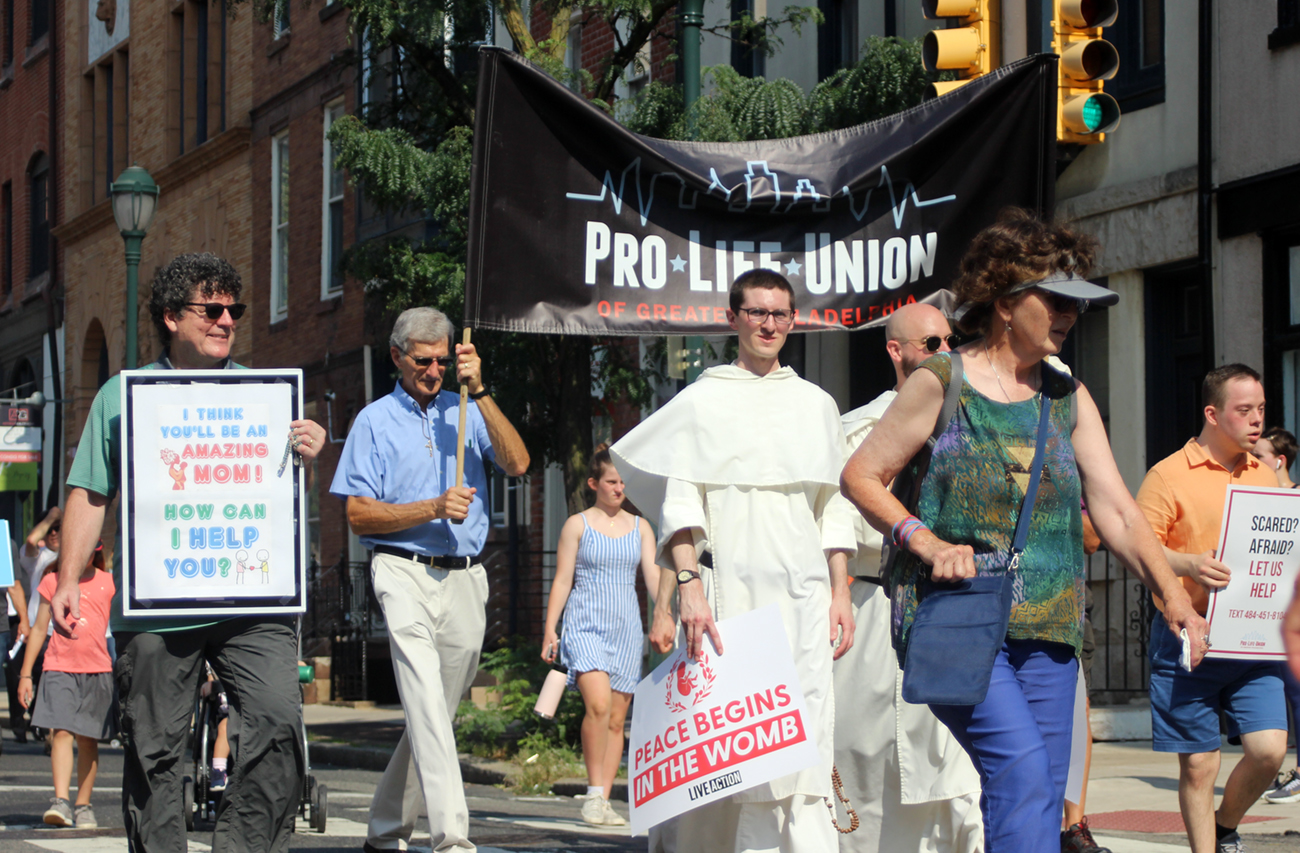 Participants walk along Locust Street in Philadelphia during a July 17 rally and prayer vigil sponsored by the Pro-Life Union of Greater Philadelphia. (Gina Christian)

NEXT: Hymn writer says little-known Marian apparition has a message for today