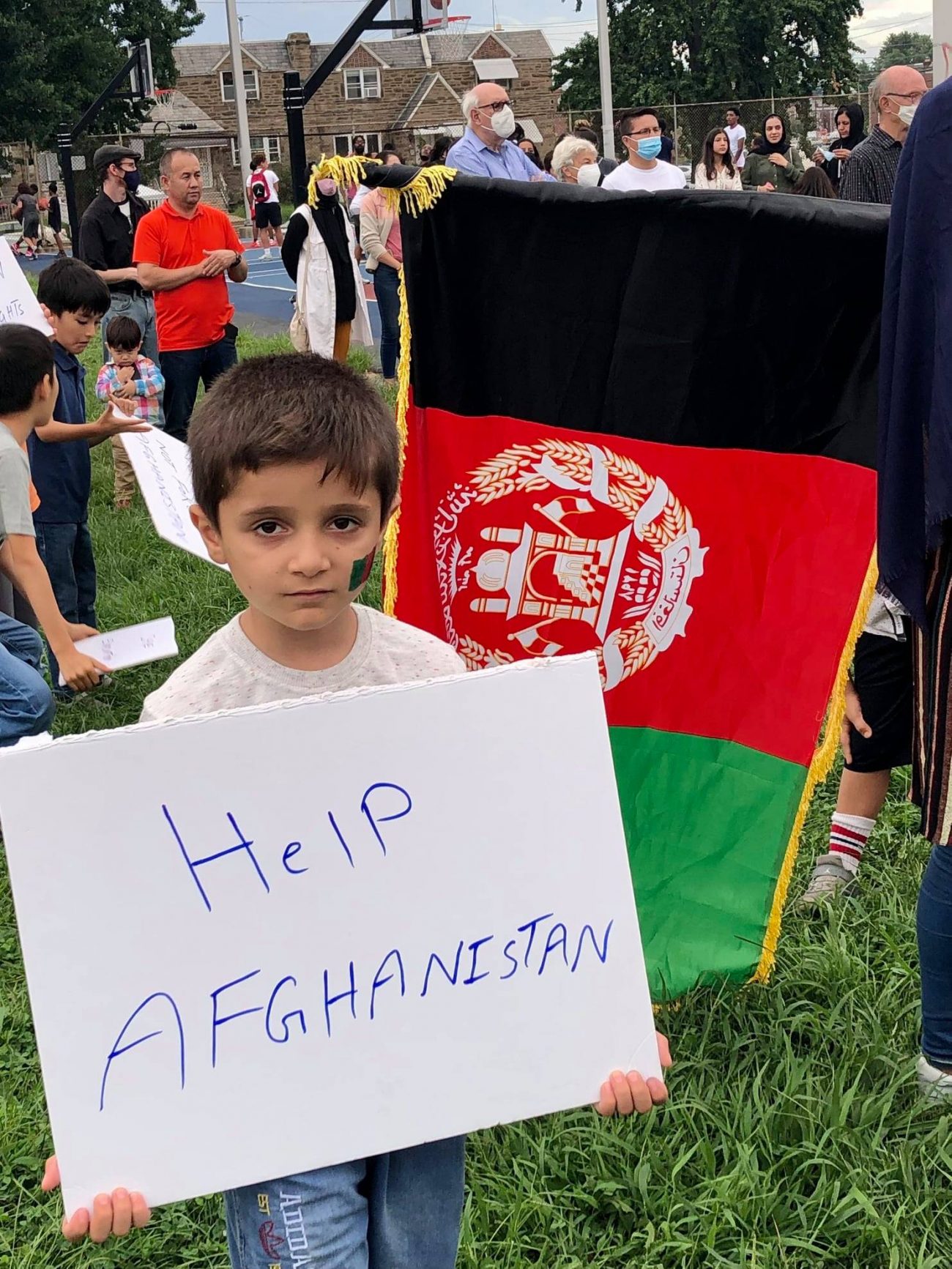 A boy holds a sign at an Aug. 22 rally for the Afghan people held in Northeast Philadelphia. (Facebook/Office for Pastoral Care for Migrants and Refugees)

Afghans in the Philadelphia area feel they have been “abandoned” as the U.S. exit from Afghanistan prompts a humanitarian crisis, said an archdiocesan ministry director.

“They had 20 years of the U.S. helping them out, building and creating options for them,” said Religious Sister of the Assumption Gertrude Borres, who heads up the Office for Pastoral Care for Migrants and Refugees. “For them, it’s like suddenly the rug has been pulled out from under them.”

The Aug. 22 gathering, which took place at the city’s Tarken Recreation Center in Northeast Philadelphia, was sponsored by three local refugee resettlement agencies – the Nationalities Service Center, HIAS Pennsylvania and Bethany Christian Services – as well as the Mayor’s Office for Immigrant Affairs.

“We were a presence there as the church, together with other groups,” said Sister Gertrude. “It was beautiful to see a multicultural representation.”

At the rally, Sister Gertrude spoke with a number of Afghan nationals, including one man who had worked with the U.S. embassy in Kabul.

While he and his immediate family were able to flee to the U.S. some six months earlier, his parents, along with his seven siblings, their spouses and their children, have been “left behind in the remote Helmand Province,” which fell to the Taliban earlier this month.

“The Taliban have destroyed our houses and used them as shelters,” said the man, noting his work on behalf of the U.S. placed his entire extended family in danger.

“There are many people who talked about my job with the embassy and my assistance to the U.S. government for the past decade,” he said. “That’s why my parents, my family, my siblings have left … and moved to an unknown area because of the serious threat they are facing.”

With their loved ones at risk back in Afghanistan, “everyone should raise their voice for humanity,” said another Afghan man in attendance. “We feel depressed, helpless. We need together to raise our voices.”

Some on hand expressed frustration over seeing two decades of social and economic progress rapidly undone with the U.S. exit and the Taliban takeover.

“We feel sad because we spent millions of dollars and the U.S. government spent thousands of lives to defend our country, and now it’s come back, the old (regime),” said one Afghan national. “The Taliban have taken over all of the country, and they are beating kids and those people who worked for the government. We want peace.”

Less than a week after the rally, at least 13 U.S. service personnel and dozens of Afghans were killed in an Aug. 26 attack on the Kabul airport, the site of the U.S.-led airlift. Islamic State Khorasan (ISIS-K) has claimed responsibility for the suicide blast and gunfire behind the carnage; U.S. officials believe another attack is likely before the Aug. 31 end date for evacuation efforts.

Sister Gertrude said that she and fellow pastoral workers remain close to Afghan families amid the suffering and turmoil in their homeland.

“They are not Catholic; they are Muslims, but that does not stop us from being in solidarity with them during a humanitarian crisis,” she said.

The liturgy, which will be celebrated by Philadelphia Auxiliary Bishop Edward Deliman, will also focus on the nation of Haiti, which was rocked by a 7.2 earthquake earlier this month just weeks after the assassination of its president.

Those who flee poverty, violence, repression and natural disasters seek “a new life and a sense of belonging” in the U.S., said Sister Gertrude, adding that her response was one easily understood in any language.

“Yes, we are brothers and sisters, and we welcome you,” she said.

PREVIOUS: Young Catholic Professionals get down to business of bringing faith to workplace