St. Rita statue back home after theft from national shrine 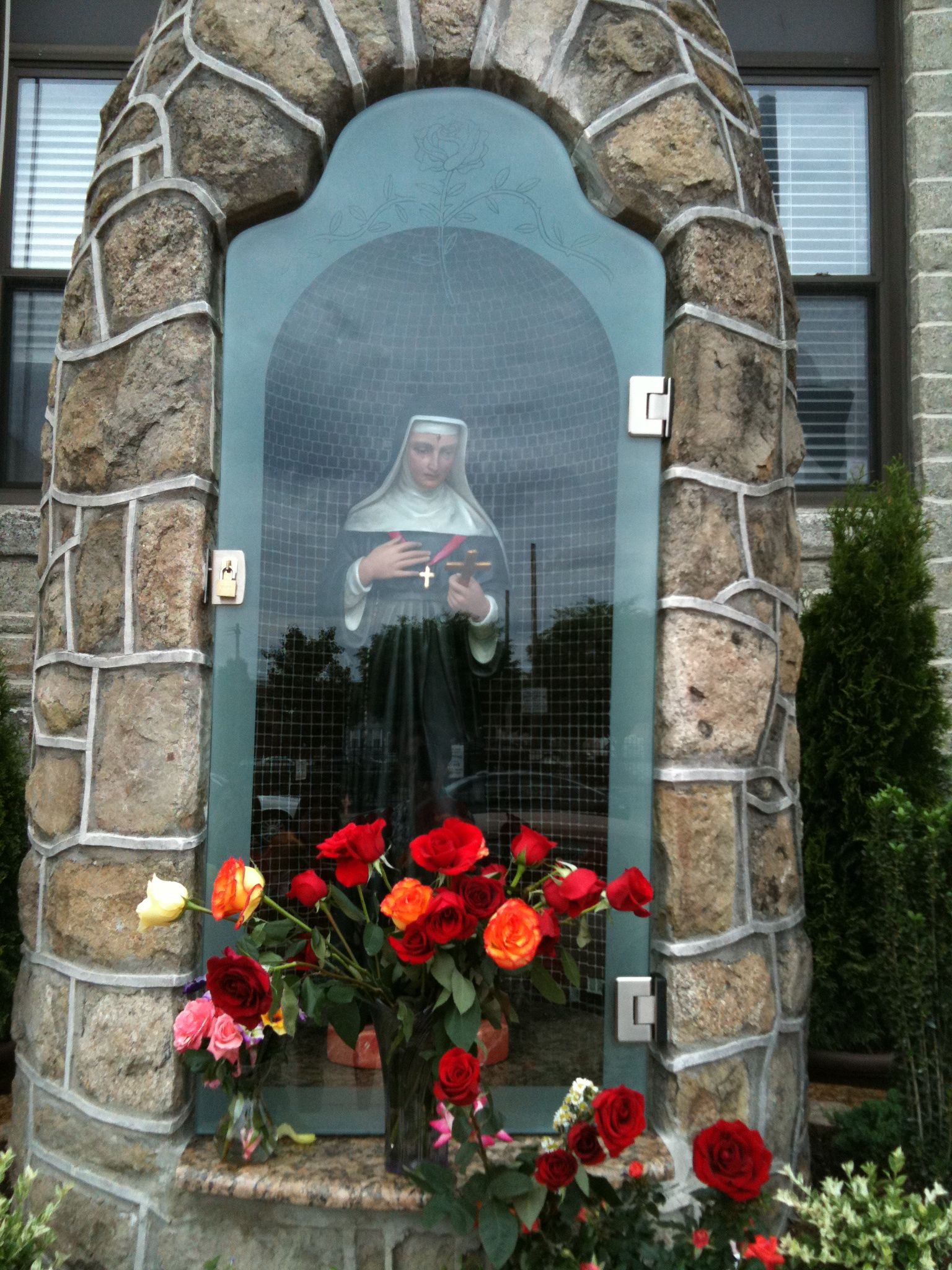 A beloved statue at a South Philadelphia shrine is back in its rightful place after disappearing for a “harrowing 36 hours.”

The four-and-a-half foot image, which was kept behind a locked, glass-paneled grotto, was reported missing yesterday in what shrine director Jonathan Jerome called “an odd turn of events.”

In response to a tip, police located the undamaged statue earlier in the day in front of a home on Webster Street, about seven blocks north of the shrine.

“Even the person who lived at the house she was in front of was surprised,” said Jerome, adding that police do not suspect the homeowner or any residents on that block.

“She was probably just dropped off there, since she was heavy enough that the person (carrying the statue) needed to stop,” he said.

But the disappearance itself remains “so surreal,” Jerome said, noting that the theft occurred between the hours of “about 7:30 p.m. Thursday and 11:30 a.m. Friday,” when shrine patrons were last able to confirm the statue was in place.

Jerome learned of the disappearance when a shrine regular, returning from a funeral, stopped to pray at the statue – and realized it wasn’t there.

“There was no damage to the glass and no damage to the case that we could see,” he said. “The padlock was not damaged or cut, which is interesting. … They were able to maneuver the lock and then unlock the deadbolt.”

Currently, there are no security cameras on that part of the shrine campus, he said.

The shrine had twice applied for state grant money (made available after an October 2018 mass shooting at a Pittsburgh synagogue) to install cameras, but had been denied both times.

We just got off the phone with @PhillyPolice who confirmed that our statue of Saint Rita has been found & returned safely to the Shrine!

Our intention is to clean the statue, repair the lock, & return Saint Rita to the grotto as soon as possible.

Saint Rita, pray for us! pic.twitter.com/g03ChTG1jI

With an estimated value of $100,000, the statue of the saint had been donated by a benefactor to replace a stone version toppled and destroyed by teens some 13 years ago. The grotto in which the current statue was housed was the work of a “community effort,” said Jerome, with “two to three different families” contributing to the cause. 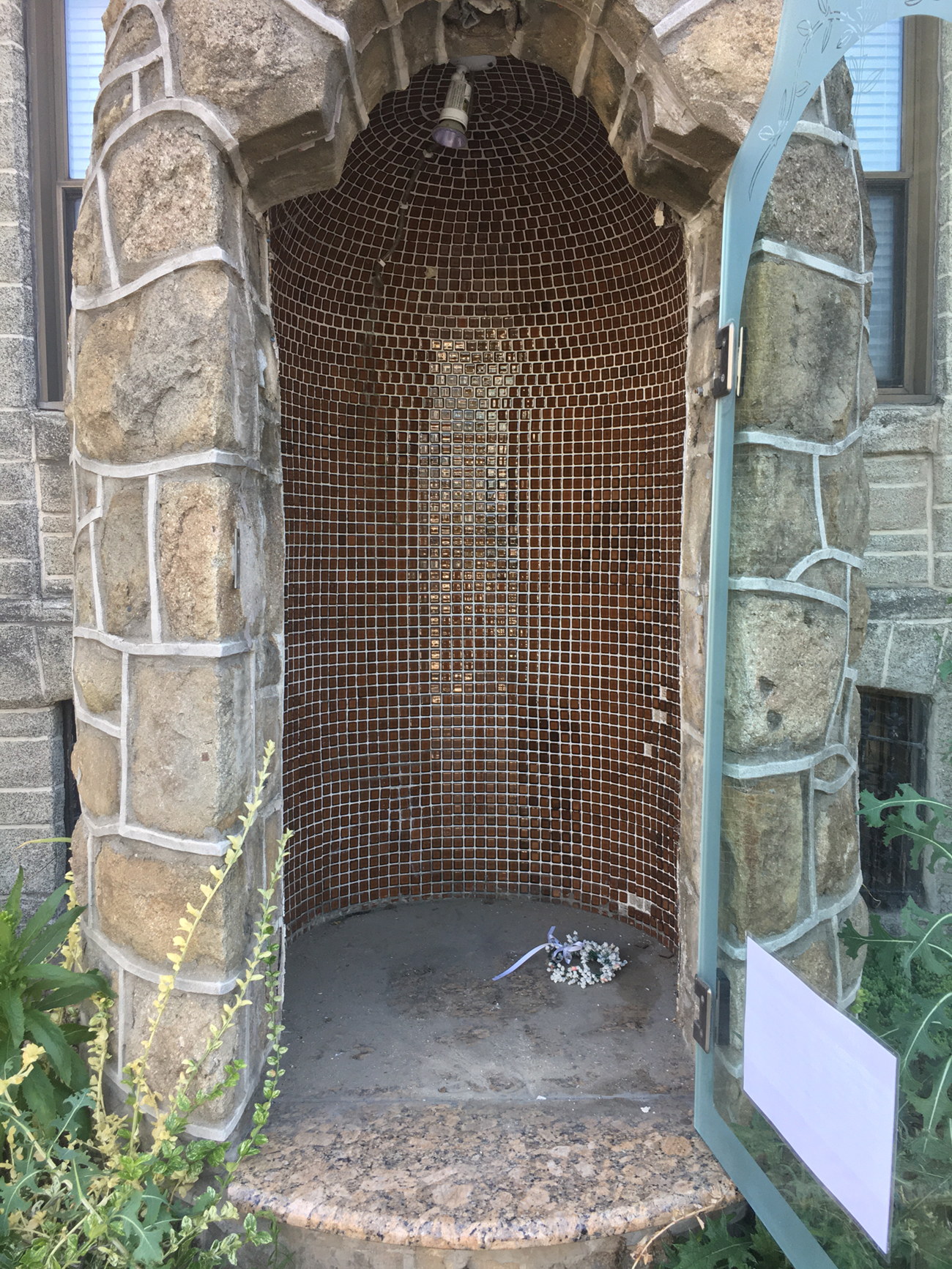 A statue of St. Rita of Cascia was stolen between Aug.12-13 from this grotto outside the saint’s national shrine on Broad Street in South Philadelphia. The grotto and the statue (which was located a few blocks away on Aug. 14) were undamaged. (Jonathan Jerome/National Shrine of St. Rita of Cascia)

Shrine staff and the Augustinian friars in residence at the shrine regard both the statue and the grotto as “invaluable” means of evangelization, said Jerome.

“When you think about the millions of people who pass by there annually, Catholic and non-Catholic, she greets them on Broad Street,” he said.

Born in medieval Italy, the saint – who during the course of her difficult life was a wife, widow, mother and Augustinian nun – is particularly revered for her “virtues of peacemaking and forgiveness,” said Jerome, something “heartbroken and shocked” shrine staff focused over the past day and a half.

“We were trying in the midst of all this to realize that St. Rita encourages us to forgive and seek reconciliation, peacemaking and healing, even with the person or persons who took the statue,” he said.

The friars in particular prayed for a long shot: the statue’s return in time for the Solemnity of the Assumption of the Blessed Virgin Mary, Aug. 15, which also coincides with the reinstatement of the in-person Sunday Mass attendance obligation.

“The quiet prayer of some of the friars was that she be returned for everyone who is coming back to Mass, perhaps for the first time in a year and a half,” said Jerome.

Others pleaded with St. Anthony of Padua, an intercessor for lost items, to “grab St. Rita by the hand and return her safely,” he said.

With their patron back in place – and in time for the Assumption — shrine staff are overwhelmed with “sheer joy,” said Jerome.

“Prayers have been answered,” he said. “It’s reassuring that St. Rita, patron of the impossible, reaffirmed that nothing is impossible with God.”

Police plan to “do more digging,” said Jerome, but “for the most part … it’s essentially a closed case.”

Neither he nor shrine staff have any idea why or by whom the statue was targeted, he said, but after the stress of the past several hours, their faith and their sense of humor remain intact.

“She’s been in South Philly for 114 years, so maybe she wanted to get out and see the people,” said Jerome.

PREVIOUS: Catholics in Phila. asked to mask up for Mass

NEXT: Life ‘will never be like before’ following earthquake in Haiti, says local priest