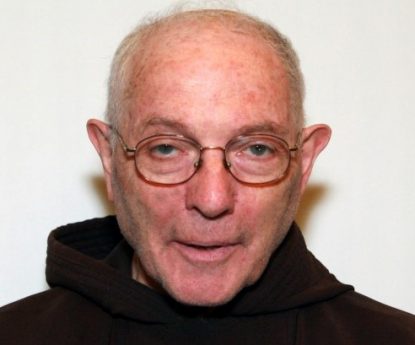 He was the seventh of 11 children born to Joseph and Catherine (Clerkin) Gavin, who worked a 10-acre farm to provide a living for their family. Brother James left grade school at age 14 to help manage the family farm.

Beginning in 1954 he became a “journeyman laborer” working variously as a farm hand, cabinet maker and furniture repairman as he considered leaving Ireland for North America. He eventually arrived in Canada in 1957.

It was while working for the Canadian National Railway that James met Father Raymond Cadwallader, a native of Braddock, Pa. and professor at Duquesne University, striking up a friendship that led to Pittsburgh and eventually to the Capuchin friars. For several years James was tutored in American life and history by his priestly friend and patron, who instilled in him a desire to learn and to read that remained with him for the rest of his life. He became a U.S. citizen in 1965.

James met Father Angelus Shaughnessy, O.F.M. Cap., in 1959, beginning a process of discernment that would lead to his making application to the Capuchin Friars of the Province of St. Augustine in 1962.

As a somewhat “older” candidate at that time, age 30, his application process was extended. Inquiries made on his behalf revealed a deeply prayerful man of strong faith, modesty, dependability and charity.

He was invested with the Capuchin habit in 1964 as Brother Louis, the religious name that he bore faithfully until the friars were allowed to return to their baptismal names in 1968. He professed the gospel counsels of poverty, chastity and obedience in 1965, vows which he would treasure and observe devotedly for the rest of his life.

Brother James posed a bit of a puzzle to his superiors as far as placing him in an apostolate: he was obviously a diligent worker but little in his curriculum vitae matched up with the more regular array of tasks that the brothers engaged in from day to day.  He was undereducated, often difficult to understand with his rapid and accented speech, but was energetic and dependable.

As a result, Brother James was initially engaged in the work of “fraternal service” which included various domestic chores in the kitchens, laundries and grounds of friaries.

In 1974 Brother James was assigned to St. Cecilia Parish in Rochester, Pa. as a pastoral assistant and began an evangelizing ministry that would largely define the rest of his life’s work. His assignments would routinely bring him into contact with believers and non-believers from differing cultures, social classes, races and traditions in West Virginia, Baltimore and Philadelphia.

Despite his meager formal education, Brother James was a grand master of the human experience: neither age, nor race, nor social standing nor religious affiliation could present an insurmountable barrier to his engaging personality and genuine interest. He was quick to extend welcome and offer assistance, especially to visitors. He knew what it was to be a “pilgrim and stranger,” and to benefit from the kindness of others. His compassionate heart was readily at the service of those who were suffering.

His years of service at St. Cecilia Parish from 1974 until 1981 earned him recognition from the Father James Reed Council of the Knights of Columbus as “Man of the Year” in 1985. In 2002, Brother James was presented with the “National Brotherhood Award” at the 31st Religious Brothers Conference in Cambridge, Mass.

Of his ten years serving at St. John the Evangelist Parish in Center City Philadelphia (1993-2013), a friar once remarked: “The province makes very few ideal assignments, but this was one of them.” The parish saw him as their “ambassador to the world,” known and loved by virtually all who met him.

From the day of his profession, James valued above all else fidelity to his religious vows and to his life of prayer, and he pursued these relentlessly. He was a truly humble friar, but he was hardly meek: He had little patience with friars who were slack in their prayer life or anyone who showed disrespect to the Mass or the church.

He was ever aware of his own human weaknesses and sins and placed great value upon the Sacrament of Reconciliation, especially when he found it difficult to reconcile his own emotions with perceived slights or wrongdoing by others.  Especially in his later years he was much concerned about making amends with family members and anyone whom he feared he may have offended, devoting much effort to peacemaking in his relationships.

Even though he was a man of strong opinions and feelings, he worked diligently to maintain his humility and not take himself too seriously. His Irish wit and warm brogue provided a balm to many hurts and fears and gained him rapport with rich and poor alike. Like St. Francis, he was willing to be a “fool for Christ” and spared little of himself in order to strengthen the faith, hope and love of others for God.

His long labors eventually took their toll on his health, and in 2013 he returned to Pittsburgh and to well-earned rest and healing of various ailments. His health slowly failing, he moved to Vincentian Home in Pittsburgh’s North Hills where he remained until his death.

He was predeceased by siblings Edward, Patrick, John, James and Thomas. He is survived by brothers Joseph of Devon, England and Eugene of Stranooden, Ireland, and sisters Mary Gavin of Victoria, Australia, Susan (Ennis) of Manchester, England and Kathleen McGarry of County Kildare, Ireland.

Friars will receive the body of Brother James at St. Augustine Friary, 221 36th Street, Pittsburgh on Sunday, Aug. 8. Visitation will be held in the friary chapel beginning at 7 p.m. and a vigil service at 8.

The funeral Mass will be celebrated at 10 a.m. on Monday, Aug. 9 at St. Augustine Church, 220 37th Street, Pittsburgh. Interment will be in the friars’ plot of St. Augustine Cemetery immediately following the funeral liturgy.

Contributions in memory of Brother James may be made to the Capuchin Friars, 220 37th Street, Pittsburgh, PA 15201.