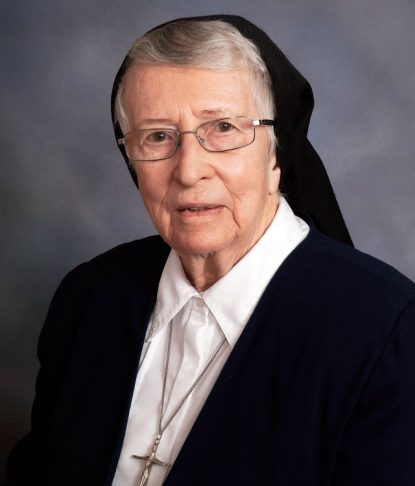 Sister M. Joseph Marion Gallagher, I.H.M., died Aug. 7 in Camilla Hall, Malvern. She was 94, and in the 76th year of her religious life.

The former Mary Ann Gallagher was the daughter of Joseph and Sarah (McGuigan) Gallagher of St. Matthew Parish in Philadelphia.

She attended St. Bernard and St. Matthew schools followed by St. Hubert High School for Girls, from which she graduated in 1944. Later, while in the I.H.M. community, she earned degrees from Immaculata and Villanova universities.

She entered the Sisters Servants of the Immaculate Heart of Mary in 1945 and received her habit and her religious name, Sister Joseph Marion, the following year. Sister Joseph pronounced her first vows on Aug. 15, 1948.

In the 1970s and ‘80s Sister Joseph served as local superior/principal at St. Margaret, Reading; Notre Dame, Miami; and St. Monica, Berwyn, as well as Bishop Shanahan High School as an English instructor.

From 1992 to 2012, Sister Joseph resided at Immaculate Heart Convent in Springfield. She taught English at Cardinal O’Hara High School and served in a special program offered at Archbishop Prendergast.

Sister Joseph Marion joined the Apostolate of Prayer and Service at Camilla Hall in August 2012 until her death.