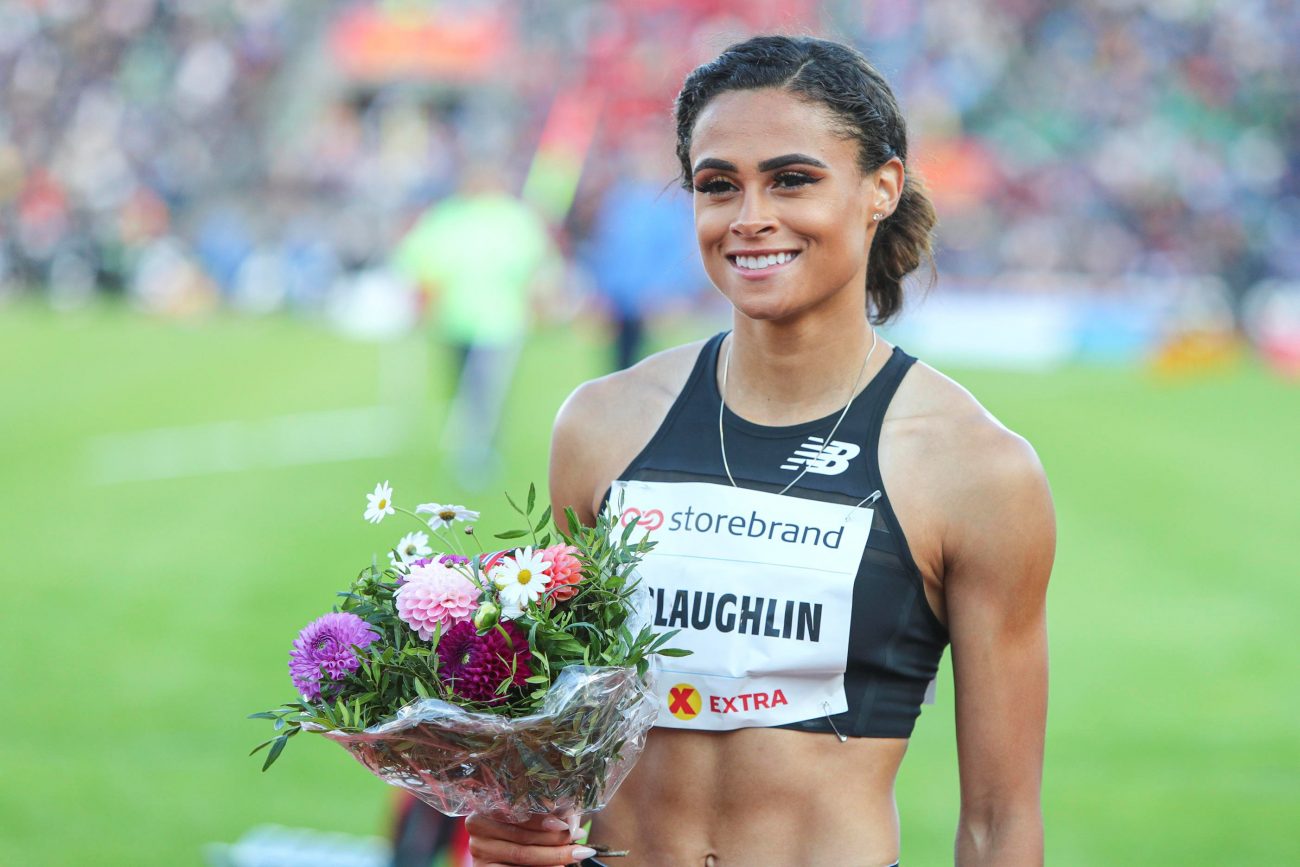 Sydney McLaughlin, a 2017 graduate of Union Catholic High School in Scotch Plains, N.J., poses with flowers June 13, 2019, after winning the women's 400-meter hurdles during the IAAF Diamond League in Bislett Stadium in Oslo, Norway. McLaughlin is competing in track and field at the Summer Games in Tokyo. (CNS photo/Lise Aserud, Scanpix via Reuters) NORWAY OUT.

SCOTCH PLAINS, N.J. (CNS) — When U.S. runner Sydney McLaughlin crossed the finish line to win the gold in the 400-meter hurdles Aug. 3 in Tokyo, she had the cheers of fans supporting her from the New Jersey Catholic high school where she graduated four years ago.

Fans at the watch party at Union Catholic High School in Scotch Plains jumped up and down and cheered for their fellow alumnae who broke her own world record in the event and narrowly beat fellow U.S. teammate Dalilah Muhammad, who was the defending title-winner in this event.

McLaughlin began her quest to win the gold medal in the event at the Summer Games when she smashed the world record in the 400-meter hurdles at the U.S. Olympic Trials in June.

McLaughlin, who turns 22 Aug. 7, stunned the track and field world as a 16-year-old student at Union Catholic when she made the U.S. team for the 2016 Olympics in Rio de Janeiro. She became the youngest U.S. athlete to compete in track and field at the Olympics in 44 years when she advanced to the semifinals in Rio.

She produced “another jaw-dropping performance,” as a Union Catholic article phrased it, when she smashed the world record in the women’s 400-meter hurdles July 27 on that last night of the U.S. Olympic Trials at Hayward Field in Eugene, Oregon. She became the first woman to run the 400 hurdles in under 52 seconds — she set a new world record of 51.90.

When McLaughlin saw her time flash up on the big board, she threw her hands on her head and then over her mouth in utter disbelief. She then squatted on the track as she soaked in the historic moment. Muhammad, who finished second at 52.42, was the first person to congratulate the new world-record holder.

McLaughlin was a favorite to win the gold in Tokyo.

When she graduated in 2017 from Union Catholic, McLaughlin had finished her high school career with 13 national titles — seven individual and six on relays — as well as a state record tying 11 New Jersey Meet of Champions titles, seven state records, four national records and one World Junior record, and became the only athlete to ever be named the Gatorade National Athlete of the Year two straight years (2016-17).

After high school McLaughlin went to the University of Kentucky where she had “one of the greatest one and done seasons in NCAA history,” the Union Catholic article said. At the 2018 NCAA Championships during her freshman year, she won the 400-meter hurdles in 53.96, and about an hour later splitting 50.03 on fourth place in the 4×400 relay to help the Wildcats finish fourth in the final team standings.

After the NCAA Championships, McLaughlin announced her intention to turn pro. She now runs professionally for New Balance.

She credited her current coach, Bobby Kersee, for preparing her for this Olympic year.

Kersee is a veteran of track and field who coached his wife, Jackie Joyner-Kersee, who is ranked among the all-time greatest athletes in the heptathlon as well as the long jump, and Florence Griffith Joyner, the fastest woman of all time. He has coached sprinter Allyson Felix since 2005.

McLaughlin also credits her success to someone else: “All of the glory to God,” McLaughlin said during her post-race interview with NBCSN. “Honestly this season, working with my new coach and new support system is truly about faith and trusting the process.”

In its coverage of McLaughlin’s stellar performance at the Olympic Trials in Oregon, Runner’s World magazine noted that the heat wave on the West Coast delayed the start of competition, “but that didn’t bother Sydney McLaughlin.”

“If McLaughlin can run 51.90 at trials, in near-triple-digit temperatures, then what can she do in Tokyo? Tune in at the beginning of August to find out,” it said.