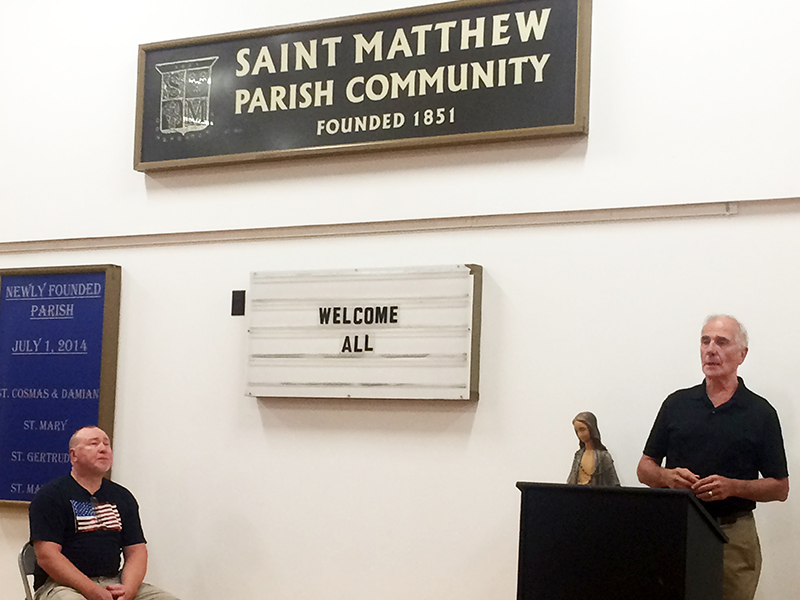 Ed Garbacz, a parishioner of St. Matthew Parish in Conshohocken, gives a talk Sept. 13 in the parish hall on the parts of the Mass.

For the past few years Ed Garbacz has been giving quarterly talks at his church, St. Matthew Parish in Conshohocken, to make Catholics more familiar with their responsibility to know more about their faith.

His “Come and See” talks cover various subjects such as the importance of prayer and how we listen to God in the Liturgy of the Word. In a talk Sept. 13 Garbacz examined the meaning the Liturgy of the Eucharist, focusing on the role of the worshiper during this part of the Mass and how the Eucharist impacts how we grow in faith.

Another point of the talk was how faithful Catholics may help bring back those who have distanced themselves from the church and from religion.

“Some don’t believe that the bread and wine become the actual body and blood of Christ,” said Garbacz. “We have to have that faith. We have to bring this out so that others will have the same belief.”

He explained the Liturgy of the Eucharist and its three parts: the presentation and preparation of the offertory gifts; the Eucharistic Prayer; and the Communion rite. Unlike the Liturgy of the Word where Scripture is read from a lectern and the congregation listens, this second key part of the Mass takes place at the altar in the commemoration of the sacrifice of Jesus.

The priest begins the preparation of the gifts by lifting the bread, pouring wine and water into the chalice and lifting it, saying the preparation prayers aloud or in silence. When blessing the commingled wine, he says, “By the mystery of this water and wine, may we come to share in the divinity of Christ who humbled himself to share in our humanity.”

He then washes his hands with water, praying that God would “cleanse me from my sins,” before he consecrates the bread and wine into the Body and Blood of Christ, present in the Eucharist.

“We should be asking God the same thing,” said Garbacz.

The Eucharistic Prayer is the great prayer of thanksgiving. It includes a preface and other prayers offered by the priest together with those of the congregation, who also offer sung or recited prayers including the “Holy, Holy, Holy.”

“We’re constantly praising and thanking God for the gift he is giving us,” said Garbacz.

As the faithful proceed through the Eucharistic Prayer, they pray that the dead may see the face of God, and together with Mary, St. Joseph, the apostles and all the saints, that we the living might also someday join them in heaven.

The priest concludes this prayer with the words “All glory and honor is yours almighty Father, forever and ever,” to which the faithful respond in affirmation, “Amen.”

The Communion Rite opens with the Lord’s Prayer. But because Christians say it so often, not just in church but also in private prayer at other times, they might not always think about the words or let them sink in, Garbacz suggested. He recommended that the phrase “thy will be done” is especially good to remember and contemplate.

“They are four words that offer a challenge,” he said. “Each of us is given a special talent by God to spread this to others. God wants us to be aware of the needs of others.”

At one time the sign of peace, always an option of the liturgy, consisted merely of a bow to people sitting nearby. Over time the gesture became a handshake and even a hug across the church aisles. During some cold and flu seasons and even more so as a result of COVID-19, parishes have sought to avoid physical contact and omitted the option.

One woman who attended Garbacz’s talk, but did not give her name, recommended returning to a simple bow to take up less time and to avoid saying a few words to one’s neighbor during the liturgy.

Before Catholics receive Christ in holy Communion, they profess their unworthiness as sinners to receive the Lord, but are reminded of God’s mercy. After Communion but before the Concluding Rite, the celebrant prays a final prayer. At the conclusion, he invokes the Holy Spirit to bring the people closer to union with the Father.

Garbacz wrapped up his talk by suggesting that the participants could bring other people closer into the church by considering themselves a raindrop, joining others in a wash of love, as God desires.

St. Matthew’s parishioner Chris Dieckhaus has enjoyed Garbacz’s series on the parts of the Mass. “He does a very good job explaining everything,” Dieckhaus said.

The talk is one of the ongoing faith formation events at St. Matthew’s.

Recitation of the rosary takes place every Monday night in the St. Matthew Parish Center. Following Garbacz’s talk, people gathered to pray the rosary not only for their own intentions and those in need but to develop a better relationship with their fellow parishioners as well.

“We get to know people on a more personal level, build up the parish and bring more people back to church,” said Garbacz.

His next quarterly talk, on a topic to be determined, is set for Monday, Nov. 30. It presents another opportunity to bring people together as the Advent season begins.

St. Matthew’s parishioners listen to a talk on the parts of the Mass, part of their parish’s faith formation efforts, by Ed Garbacz Sept. 13 in the parish center.