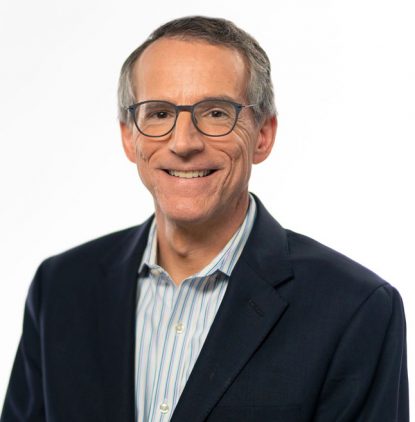 Religion and politics might seem like two topics that shouldn’t cross paths. But Guy Ciarrocchi not only believes there’s an intersection of moral or faith-based perspectives in most public policy debates, he’s made a career of driving right through it.

As a one-time advocate for the Archdiocese of Philadelphia with government leaders, Ciarrocchi hopes to take his vision of values in politics to the highest level in the state. On Sept. 20 he announced his run for the Republican nomination for governor of Pennsylvania.

“When you pass a budget or you decide how or if to care for people who are impoverished or how to provide education … how to strengthen the family or lift up life, those are moral and political intersections that are apparent and in front of all of us,” Ciarrocchi said.

“So to try and separate morality or faith from serious public policy discussions is virtually impossible, unless you’re talking about (building) a highway. It’s hard to separate them.”

Ciarrocchi , 56, has been honing a career in public service all of his adult life. Raised in South Philadelphia and St. Monica Parish, he graduated from the parish school then St. Joseph’s Preparatory School, then on to St. Joseph’s University and Villanova Law School.

After earning his law degree he worked first as a deputy attorney general on appeals cases for the commonwealth, then ran a private practice in his neighborhood handling zoning issues and family law disputes.

“That usually means it’s one part law, one part some counseling and therapy,” he recalled.

He’d always had an attraction to politics, and especially the policy side where problems are resolved and issues advanced. So he ran for a state House seat in 1992.

Although that bid failed, he “had the bug for government” and accepted an invitation to serve as chief of staff for state Sen. Melissa Hart of suburban Pittsburgh.

It helped him learn about more communities across the state, and about finance, since his boss was chair of the Senate Finance Committee.

After a few years Ciarrocchi landed the position of director of the Archdiocese of Philadelphia’s Office for Public Affairs in 1996.

That allowed him to return from Harrisburg to his home area where he could spend more time with his young family.

He and wife Chris married in 1991 at St. Adalbert Church in Philadelphia and were living in South Philadelphia when they moved in 1995 with their then-baby daughter to the suburbs and St. Norbert Parish, Paoli, where they remain active members.

The position with the archdiocese called for Ciarrocchi to represent the church’s positions and interests with government officials and agencies at all levels, plus various community groups.

Because the archdiocese was and remains one of the largest providers of social services and education in the state, Ciarrocchi insisted that it “be an active participant” in policy debates regarding “how to care for the needy, how to deal with adoption, how to deal with single moms or with education,” he said.

“The archdiocese not only has a moral and faith perspective, but also very practical. To remove the church from those debates skews the discussion because you can’t really (debate) what Philadelphia’s safety net is without the archdiocese being engaged with the city or the county or officials from other agencies.”

Issues that he worked on prominently included the late 1990s’ push for school choice in Pennsylvania, delivery of social services in Philadelphia and advocating for the church’s commitment to life and family.

His role involved talking to many people and leaders, forming networks and building like-minded coalitions. The skills of doing that work and the connections he made would pay off in the future.

After 2004 when he left the archdiocese his experience broadened to include working for the Bush-Cheney reelection campaign, the administration’s Department for Housing and Urban Development, stints as chief of staff for Congressman Jim Gerlach and Pa. Lt. Gov. Jim Cawley, and for the past seven years, as CEO of the Chester County Chamber of Business and Industry.

In that latter role, he heard about the hardships of small businesses across the county that were rocked by the restrictions from the COVID-19 pandemic.

Leading a successful coalition last spring that pushed for and ultimately won approval of a ballot referendum limiting the authority of the governor during an emergency, Ciarrocchi found he again enjoyed that hard work of building networks of people and organizations toward a policy goal.

When the coalition began to break up after the election in May, he spent the summer considering how to continue the process as a candidate for governor. In preparation for the primary election on May 17, 2022, and the general election Nov. 2, Ciarrocchi moved on from the chamber last week.

Supporting small businesses — whose workforce needs and supply chain problems are still acute – urban renewal and parental choice in education, and limiting abortion in the state, are key pillars of his platform. Ciarrocchi suggested the key to them all is for Pennsylvanians to talk about those issues and to listen to one another.

“This campaign,” he said, “is necessary because our small business still need a voice. It’s a time now more than ever to increase the number of parents who can exercise school choice. No parent should be trapped in a school their parents don’t want them to be in.”

Regarding perhaps the most contentious issue, Ciarrocchi said that on abortion, “we need to have a conversation with one another so that this issue can come back to the forefront, so that we can have a thoughtful discussion, not involving screaming, not involving hate.

“There are too many abortions in America, in Pennsylvania, and every one is a tragedy,” he said. “They should never be celebrated. I would hope that people of good will would understand that. I know there are strong feelings but if we don’t start talking to each other, we’re not going to change it.”

Ciarrocchi campaign is just beginning, and this week he begins his first stops in western Pennsylvania, slowly working across the state.

Along the way he hopes to build a “grassroots, people-based campaign (where) people feel they’re part of this, part of something bigger so that we can connect with one another,” he said.

If elected to represent the Republican Party, and eventually if he is elected governor, Ciarrocchi hopes to turn around what he sees as “a lot of hopelessness after the last 19 months” of the COVID pandemic.

“We’ve been so caught up in the tragedy, the lockdown, the racial and social tension, I’d like to highlight what’s good and what’s working” through a campaign that is “built around hope and not despair,” he said.

NEXT: Persons with disabilities are ‘gifts’ to be treasured, says new director of care facility